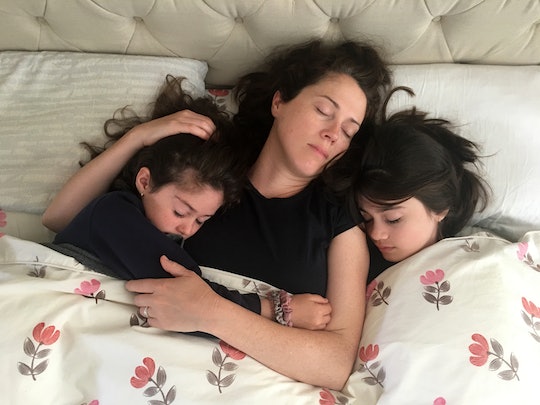 There’s no question that sleep is important. Without it, our bodies and brains may struggle to function properly. Yet, for many parents, sleep can seem elusive. Between early mornings spent getting kids off to school and late nights reviewing homework, completing household chores, or even just relaxing with a few hours of TV, it can be hard for parents to get enough sleep. But what if the school day didn’t start so early? Would parents benefit from delayed school start times? A new study has found that at least some parents would get more, and better quality, sleep if school started later.

To examine how changing school start times might impact the sleep garnered by parents of elementary, middle, and high school students, researchers from National Jewish Health partnered with the Cherry Creek School District near Denver, Colorado, to survey parents before and after changing school start times. According to the study, which was first published in Sleep Health: Journal of the National Sleep Foundation in October, high schools within the district pushed their start time back by 70 minutes (8:20 a.m.) and middle schools started 40 to 60 minutes later (8:50 a.m.) than usual. Elementary schools within the district, however, pushed the start of their school day forward by 60 minutes (8:00 a.m.).

To gauge the impact on sleep, parents were asked to complete online surveys regarding their sleep three separate times — roughly four months before the change, roughly six months after the change, and roughly 18 months post-change. While more than 10,500 parents filled out the pre-change survey, participation dwindled with each following survey with just 8,190 parents completing the final survey.

Still, the study found significant increases in sleep duration for parents of middle and high school students. On average, parents who only had children in high school reported sleeping an additional 20 minutes per day while parents who only had children in middle school reported getting an extra 12 minutes per day. Parents with both elementary and middle school students claimed to get 10 more minutes of sleep while parents of middle and high school-aged children reported snoozing for an extra 20 minutes.

“For some parents, it was just nine or 10 minutes, but for others, it was up to 25 minutes a night,” Dr. Lisa Meltzer, National Jewish Health pediatric psychologist and the study’s lead author, said in a statement shared with Medical Express. “Over the course of the week, even 10 minutes a night can add up and become almost an extra hour of sleep per week.”

What’s more, some participants also reported getting better sleep thanks to the later school start times. Among parents with children in either middle or high school, the number of survey participants who reported getting “good or very good” sleep rose 9.3% following the change in school start times. Among parents who had children in both middle and high school, the increase was 9%. For parents with children in elementary school and high school, however, the increase was smaller with the number of parents who claimed to get “good or very good” sleep rising 4.8%.

“With the increase in sleep duration and sufficient sleep, it is not surprising that more parents of secondary school students reported good sleep quality and fewer parents reported feeling tired,” the study concluded. “At follow-up, reports of “feeling tired quite a bit/very much” decreased by over 10% for middle and high school parents, and by over 7% for parents with [only] a high school student.”

But delayed school start times didn’t just impact sleep. According to Meltzer, parents also reported seeing other benefits to starting school later. “Parents were really feeling the benefits of not having to wake up as early, drag their kids out of bed, and try and get them to school on time,” Meltzer told Medical Express. “A lot of parents said that it not only helped their sleep, but also it helped make their morning routine easier, and I think those improvements to the way families function are really important as well.”

While this study from National Jewish Health is the first to examine the sleep benefits of delayed school start times for parents, it’s not the first research on school start times. In 2014, The American Academy of Pediatrics (AAP) cited a “substantial body of research” demonstrating that delaying school start times was “an effective countermeasure to chronic sleep loss” among adolescents with “a wide range of potential benefits to students with regard to physical and mental health, safety, and academic achievement. Based on that research, the AAP urged middle and high schools to push back their start times.

Most school districts, however, have pushed back on such recommendations, claiming transportation, childcare, and the scheduling of after-school activities make changing school start times too complicated to be feasible. This means, most parents will likely have to make do with however much sleep they can get before the alarm clock goes off.