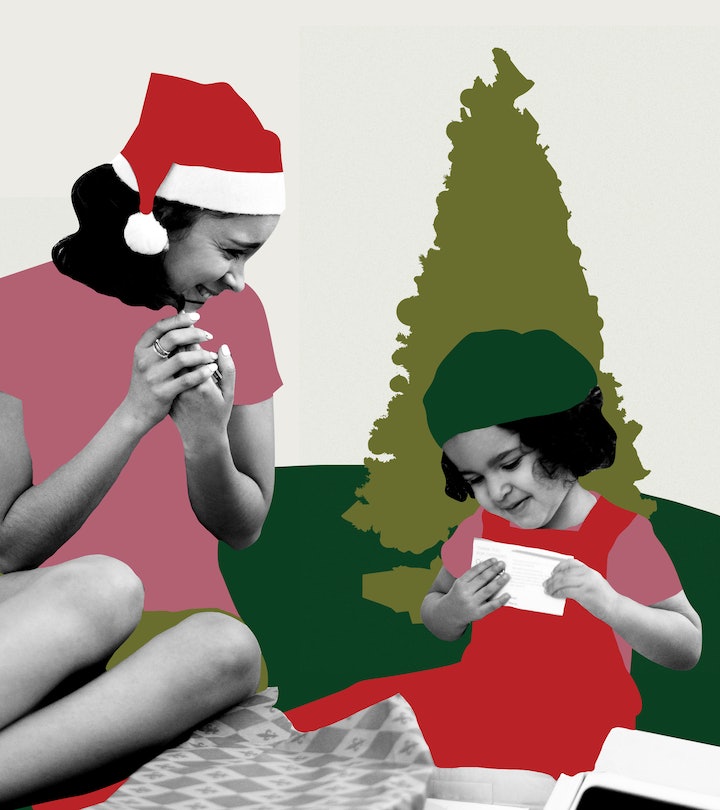 Have Yourself A Very Little Christmas. Now.

What if we decided to enjoy that time we had time?

This year, for the first time ever, all of my holiday decorations were up by December 1. The tree was trimmed, the presents were purchased and wrapped, and boxes of labeled gifts had been shipped to family members that we won’t see. I was done days before the big event.

Because I’ve had the time.

In years past, these last weeks would have been a mad dash of work parties, school events, happy hours, cookie making book club playgroup obligations, all planned up for no reason except ‘tis the season. This year, our usual frantic falalalalalalala mixtape of lights and action has become a foggy sleepwalk into a forest of folklore and/or evermore. Also we’re only wearing cottagecore. Who even are we?

Metaphorically, musically, and sartorially speaking, we fell early into the Holidaze.

What we usually call the space between the end of the holiday season and the beginning of what’s next has now just become the normal, purgatorial pause that is life. I’ve always felt like we’ve earned this pause in between. All of us, sure, but especially my fellow introverts with aggressively festive kith and kin. My own extended dance mix family celebrates the Anglican/Episcopalian calendar of Advent and Christmastide, so, what that basically means is, we go hard. Add Advent and the 12 Days of Christmas to the American tradition of queuing up Mariah Carey three minutes after the Thanksgiving dishes are done, and you’re at about 42 days of celebration.

Then, after it all happens, it all stops.

As long as I can remember, the hazy weeks between Santa’s visit and whenever it's weird to still be saying “Happy New Year” have been my most wonderful time of the year. The Hanukkah candles have all been blown out, the presents have been unwrapped, and there’s an open space under the tree well into early- to mid-January. Open-ended openness. A slow stretch into eventual responsibility, but not yet. It’s that beautiful foggy pause when the world just collectively decides to give ourselves a f*cking break.

It’s a hard year to let your heart be light.

I thought I would feel that even more this year, when we’ve really earned it. This was my plan for the next several weeks: stay inside my house and make my friend Carrie’s Rustic Italian Bread every other day, and then read, sleep, and eat as much of that bread as possible. So basically what I’ve been doing since March. (Carrie is my Mom 2.0 business partner, and she perfected her system for turning out a perfect loaf long before the sourdough bros tended starters.)

Instead, I’ve found it harder to unwind. I don’t know what to do with my hands during this downtime upon downtime. As much as I’ve always loved the annual break in our schedule, this year it’s reminding me of when our schedules completely broke. I have been afraid of the quiet, afraid of being still, afraid of two weeks with even less distraction from my own thoughts than I’ve had since March.

The truth is that while we’ve all been in pause for almost a year, I’ve actually been at it a bit longer.

I haven’t written about this or even really spoken about it publicly, but the now proverbial sh*ttiness of 2020 started for me a few days after Labor Day 2019. A routine mammogram came back suspicious, and by the first week of October, I was in surgery. Between December 1 and January 6, exactly the dates of Advent and Christmastide, I was doing radiation every day, or as my friend Gabrielle Blair said, “Worst Advent Calendar Ever.” The daily shot of poison into my body was healing me, but it was also wearing me out.

I dealt with this by not slowing down once. My dad would always say, “The only way through it is through it,” and I got through it by pretending it wasn’t happening. The busier I was, the more I was proving to myself that it wasn’t affecting me. Even throughout Mom 2.0 and Romper’s three-city Fall pop-up tour, I planned events in far away states between surgeries and treatments, coordinating speakers, flights, transportation, stages and conversations, all executed perfectly. “Execute” is an interesting word, because the pace saved me, and it killed me. I spent most of January and February traveling for work. By the time COVID hit, I was physically, mentally, and emotionally spent. I’ve been in my house ever since.

Having done all the things, I’m still me, dealing with me. More is never enough.

So I passed the first few months of an already stressful lockdown nursing a severe exhaustion hangover. I remember thinking at the time, “If I can just make it through to the holidays, everything will be better.” So much for that.

Every year we hear that the holidays make us nostalgic for happy golden days of yore, and this year, I would say that’s definitely true, more true than ever. We have all lost so much over the last months. We’re in a continuous process of individually and collectively grieving lost routines, treasured traditions, and some of our most precious loved ones.

It’s true for me. I miss my dad, who is no longer with us. And I miss my mom, diagnosed with dementia, as she’s slipping away. I miss faithful friends who are dear to us, gathering near to us once more. I miss my friends and colleagues I see at Mom 2.0 Summit. I miss criss-crossing the country for work. I miss happy hours and Broadway shows. I miss family invitations that multiply until NASA-level coordination is required to attend every niece’s choir concert. I miss lighting candles at church. I miss seeing mall decorations. Most of all, I miss any of these things being even remotely possible.

It’s a hard year to let your heart be light.

And yet it may be the first year that we, or at least I, have room to let that happen. One thing I’ve done this week is look back on the resolutions I’ve made over the last decade during this time. We think of resolutions as virtuous, even if you don’t end up keeping them. After a season of consumption, we get ourselves together. It’s like the Lent before Lent.

One startling observation I had scrolling through those past resolutions is that together they form just another list of more: read more, walk more, focus more on health, be more present. I also realized that the same thing happened with all of those resolutions as always happens when you get what you want, achieve the hard thing, cross the alleged finish line. In past years, I never accomplished a single one of those resolutions, but this year, with less of everything else to do, I made up for it. I have read more books since November than I read the 10 years prior. I’ve walked 17 marathons around my tiny neighborhood. I’ve never focused so much on my health and the health of others. And I have spent more time with my mom: even if she isn’t really present, I am.

That all felt good, but having done all the things, I’m still me, dealing with me. More is never enough.

All too soon these will be the golden days of yore. The time we had time.

So this year, in the space in between now and what’s next, I only resolve to be open. To keep my eyes open for new ideas. To listen for what my teenager is telling me between the lines. To plan less, because 2020 taught us what we can do with our detailed plans.

Since everything is done, the other day my husband and I sat at our now fully-Holiday decorated dining table (a table that has been his office most of the year) and had a dress rehearsal Christmas brunch (because that’s the best excuse to have mimosas on a Tuesday). And while we were just sitting there practicing for Christmas (who even does that), I asked him a million questions about what the holiday season was like for him when he was growing up. We’ve been married almost 18 years. More importantly, I’ve known him since we were 18, but I’ve never taken the time to grill him for every detail about his most nostalgic memories and traditions. And as I was asking about the past, it occurred to me that all too soon these will be the golden days of yore. The time we had time.

Because like everything, this will end. Thank the Lord and Dolly Parton, there is a vaccine, and everything will start back up again. It won’t be the same, but I imagine I’ll be tempted to stuff it with busyness once again, to stifle the exact quiet I have right now. So let’s not do that yet. This week, you have time to hang a shining star upon the highest bough. So maybe do that. And have yourself a very little Christmas. Now.