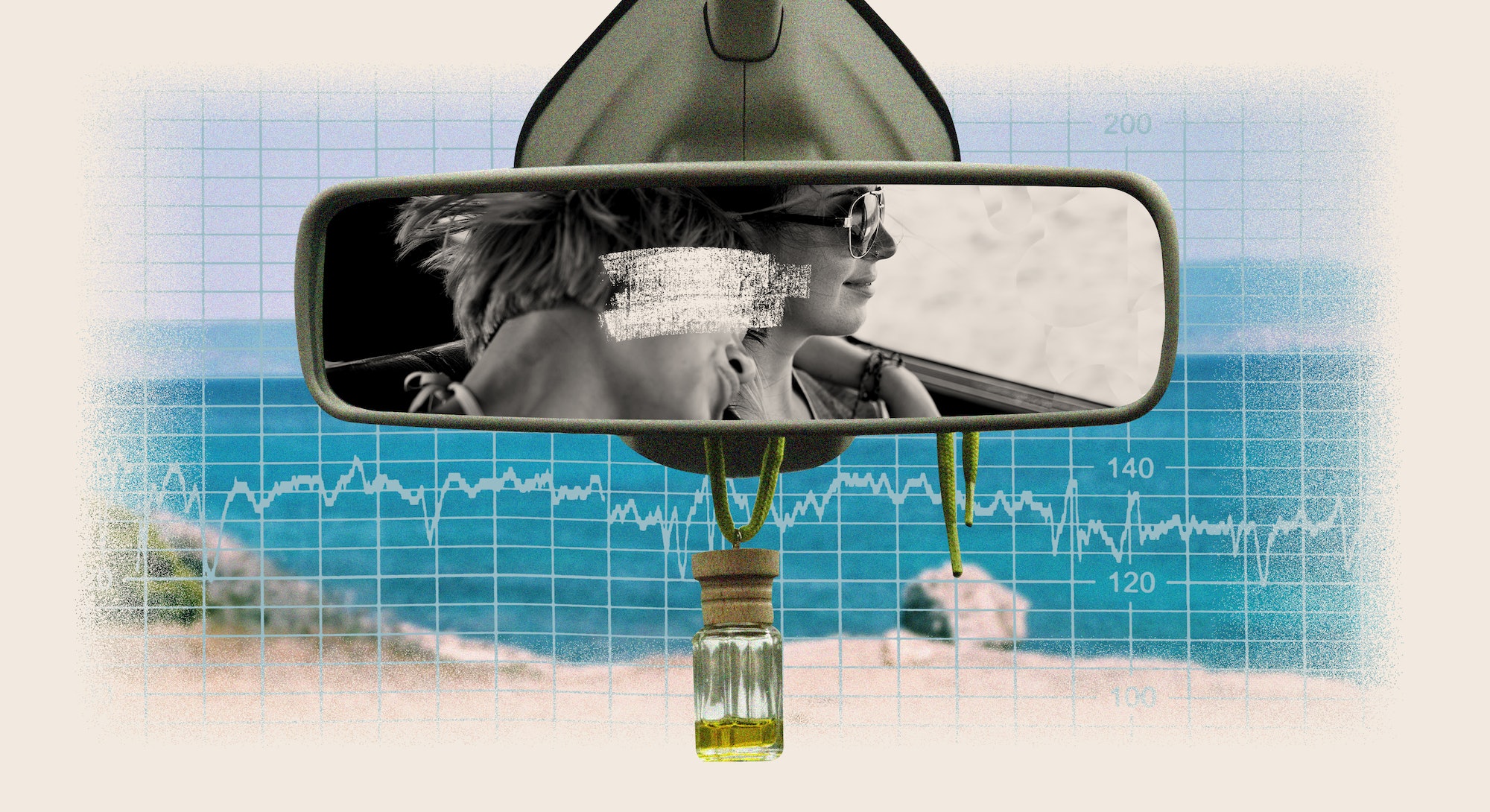 We were out in the world, steering our children toward something sweet, together. For the first time in a very long time, I wasn’t afraid.

My younger sister Kai and I were shuffling around Brooklyn’s Prospect Park, when she said, “I’m moving to LA.” Graham cracker dust gathered at the corners of her mouth. “Thanks, these are perfect.”

Of course they were. I’d brought the crackers along to stave off my morning sickness, but also because I knew Kai would forget a snack (she always forgets a snack), and because she was also pregnant, but newly pregnant, which meant she didn’t know to fend off first-trimester nausea by feeding it.

I grabbed the sleeve of crackers. I blurted, “But how will you get around?” There it was: that familiar quiver in Kai’s chin, followed by a single tear that streaked the length of her cheek. I said, “Really, it’s great news.” But I felt satisfaction: my question had called up her fear. Good. She was leaving me for a city where everyone drives, and neither of us knew how.

With seven years between us, it can be hard to find common ground. When Kai was born, I marveled at her unexpected red hair. By the time she had imaginary friends, I was into boys. I left for college when she was still in middle school, and she was a freewheeling 20-something when I became a mother. But our years in Brooklyn had brought us into the same stage of life. With the babies coming, I’d envisioned stroller walks down this same wooded path. Subways and busses could take us into the bigger world, but almost everything we needed, including each other, could be reached on foot.

Kai was 9 when the accident happened. She wasn’t in the car. But she got to the crash site as I was being loaded into the ambulance.

Officially, neither of us drove because living in Brooklyn meant we didn’t have to (when we went to our grandparents’ cabin in Vermont, one of our husbands took the wheel). But the real reason was the car accident that took place when I was 16, two months after getting my license. A drunk driver plowed into our mother’s car while she was driving carpool. According to the police, her “mama bear instincts” kicked in, which is why she’d steered right, a protective gesture that saved my life in the front passenger seat.

I shattered two vertebrae, but far worse than the neck brace was the tingling terror that filled my limbs whenever I got into a car. How foolish we were for believing that metal boxes, hurtling through the air, were safe. Whenever a car came close, I’d slam my foot against the invisible brake on the floor of the passenger side, as if I had the power to save us. I certainly wouldn’t ever get back behind a wheel.

Kai was 9 when the accident happened. She wasn’t in the car. But she got to the crash site as I was being loaded into the ambulance. Do I remember seeing her from the gurney as the doors closed me in, un-brushed hair fiery in the morning sun, or is that just the story we pieced together? When she turned 16, she announced she had no interest in a license. It really did seem the sensible choice.

It was months after our walk, after Kai had moved to LA and we’d both given birth, that I flew with my kids to visit her. We wedged our baby girls on either side of my elementary school-aged son in the back seat of Kai’s new car.

“You sure?” I was jittery at the thought of my little sister behind the wheel.

Kai rolled her eyes. “I’m a great driver. I just aced Driver’s Ed.” I tried to hug her. She told me to get in the damn car, and blasted The Dixie Chicks and took us through Laurel Canyon. Her hair flashed crimson in the California sun. She looked cool behind the wheel, in control of our destiny and offspring; bolder, braver than I remembered. By comparison, I felt my lack — needy, feeble, ashamed.

I wept whenever my daughter watched Frozen, about sisters who save each other with their true love.

In the years that followed, I brought my kids west a handful of times: for a spring break in Palm Springs, or a few nights at Disneyland. The last time was to meet Kai’s second baby. I brought only my older son, who was 11 by then. The official reason for this was that it would have been impossible to shower Kai with care with two 3-year-olds under foot, but really it was because with four kids between us, we could no longer wedge them into a single backseat. I could hear my own question, echoed back: “But how will we get around?”

February in LA is a sweet respite from a Brooklyn winter. Kai drove us to the Trails Café, and the Noah’s Ark at the Skirball, and Millard Canyon for a hike. The day before I left, in an outdoor restaurant festooned with bougainvillea, I buried my nose in the top of her baby’s milky head. Tears blurred my eyes. Kai squeezed my hand. “Your family’s coming back in April.” I felt a flush of hope at the vacation on the horizon: my husband and Kai would drive our families, in tandem, to Santa Barbara.

But back in Brooklyn, Covid shuttered my kids’ schools and my husband’s massage practice. My family of four left our apartment of twenty years for what we believed would be a brief stint out of the city, in favor of outdoor space and shared childcare at a friend’s beach house. We haven’t gone home.

It has been complicated, this not going home, a personal loss as the world has also been stripped bare, a brutal but wise financial decision. It’s hard to even know what to call it, even as we dream of going back: Moving? Abandonment? A time out?

Even in this decision’s early days, as we entered the era of Zoom school and Jackbox games, there were two tangible things I knew to hold onto: the outdoors and my family. I thrived on Kai’s Facetime calls. I wept whenever my daughter watched Frozen, about sisters who save each other with their true love. But I never imagined Kai would call from her lockdown, 3000 miles away, and say, “I can’t do this without you,” or “I’m coming back,” until the day she did.

We schemed. Kai’s family would rent an RV and drive across the U.S. We’d reunite at the Vermont cabin my grandparents built sixty years ago, and live together as summer turned to fall, until my family found a nearby place to stay — for a few months? Forever?

I couldn’t hold Kai’s baby, or pack her boxes, or heat up chicken nuggets for her toddler, but I could ship her shelf-stable milk and make a list of produce that would survive the cross-country drive without refrigeration, so that her family wouldn’t risk COVID exposure. My middle of the night worries — so sweeping, so endless — now included Kai changing her mind. Surely we weren’t both so foolish that we’d abandon our daily lives to be together. In our nightly calls, I’d figure out a way to ask how her toddler was feeling about the transition, or how many boxes she’d packed. What I was always asking, from the hollow deep inside myself, was: could I trust that she was really coming?

The day before they were to leave, I asked if she was scared. Kai breathed in sharply. I braced myself. But I had made her laugh. “I mean, I have no clue how to drive an RV.”

The next night, she called me while eating Dinty Moore beef stew at a campsite in Arizona. Her wrists ached from gripping the wheel. The baby was howling. But it was a gift to see new things, she said, after months at home. I pictured her in the driver’s seat, steering her babies and husband and most precious items, in a metal house on wheels, coming closer by the minute, a mama with amazing instincts. When I told her so, she said to stop glorifying something that was simply necessary.

It was only three weeks later, when we were habits to each other again, and we’d promised the older kids Maple Creemees, that Kai tossed me the keys of her car after buckling the children in. “Your turn.”

The cabin sits off a long, gravel road that I could drive in an emergency. But I couldn’t imagine turning onto the highway, where a relentless string of tourists zip north to the Champlain Islands. “I’m not ready,” I said. Especially not with our babies in the back seat.

I crossed my arms.

Kai took the keys and waved me to the passenger seat. “There’s an invisible steering wheel in front of you. And invisible pedals down there.” She turned on Frozen, started the car, and put it in reverse. She said, “I’m putting the car in reverse.” She looked at my hands, limp in my lap. “I mean it. Get them up there on that wheel.” I placed my hands on the wheel she’d conjured. The children belted along with Elsa, but she narrated as if we couldn’t hear them. “I’m accelerating up that hill;” “I’m putting on my blinker;” answering every stupid question before I asked it, before I even thought it. We turned onto the highway, my hands on a wheel she’d made up, pressing pedals we both agreed were there.

We were out in the world, steering our children toward something sweet, together. For the first time in a very long time, I wasn’t afraid.

“After you broke your neck,” she said, “I thought driving was scary. But I never thought about how good it would be to go wherever I want.”

I started to apologize, because now I could see that when you’re the one strapped to the gurney, or wearing the neck brace, it’s easy to only consider what you, alone, have lost.

But Kai said, “Look.” We lifted our eyes as we crossed the causeway separating the mainland from the islands. We were surrounded by the glittering lake and green mountains. We were out in the world, steering our children toward something sweet, together. For the first time in a very long time, I wasn’t afraid.