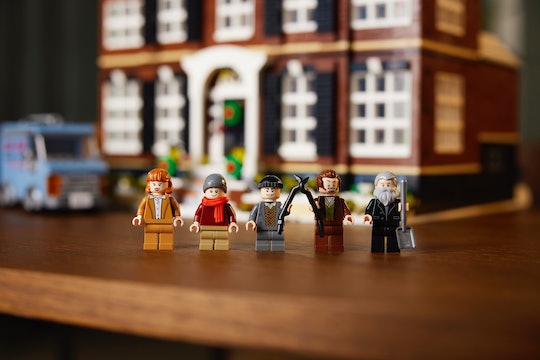 The fan-designed set is full of details from the classic holiday movie like aftershave lotion and Buzz’s pet tarantula!

If you’ve ever watched the 1990 classic Home Alone and thought “Oh my God I want the McAllister’s house,” now is your chance... kind of! LEGO Ideas — the company’s line of fan-designed builds — has recently released a set based on the Chicago-area home Kevin McAllister defends from the notorious Wet Bandits!

Designed by Alex Storozhuk of Ukraine, who submitted his creation to the LEGO Ideas platform, the set features a full, four-sided exterior that can be opened up to reveal a detailed interior. The roof and floor can also be removed to check out the truly remarkable details. In every room and feature, fans will recognize something from the movie — Harry and Marv’s van, a zipline, even aftershave lotion and Buzz’s pet tarantula make an appearance!

And, of course, what is Home Alone without characters? The set comes with mini-figures instantly recognizable as Kevin McCallister, Kate McCallister, Harry, Marv and 'Old Man' Marley.

LEGO Designer Antica Bracanov was tasked with creating the final set based on Storozhuk’s original design, who described the project as “brilliant fun,” in a statement from LEGO. “He’d thought about every aspect, from the layout of the rooms to the use of color and of course the details from the movie to make it instantly recognizable,” she added.

Storozhuk said the inspiration for this huge endeavor came from the fact that, well, he’s a ‘90s kid. “I grew up watching Home Alone and it takes a very special place in my heart,” he said in the statement. “I can’t even imagine holidays without it. This movie is very nostalgic and makes those warm childhood memories come up every time.”

Because no detail from the film was spared, the set is huge — the largest LEGO Ideas has ever released, composed of nearly 4,000-pieces. However, even in its size, design of this product was thoughtful. Divided into 24 different bags, even the order of the bags was carefully plotted out.

“Following the themes of the film,” Bracanov said, “we wanted to make the experience as immersive as possible for fans of LEGO building and the movie. The step-by-step build mirrors the movie.”

So LEGO enthusiasts can build this set starting with the robbers and their van and ending with Kevin and Kate McAllister’s Christmas morning reunion. And, with 24 bags, it’s perfect set up to be a kind of advent calendar project! The set (which is recommended for builders 18 and older) is available now from LEGO.com for $249.99.

More Like This
20 Best Gifts For Stepmoms
19 Gifts College Grads Will Love & Actually Use
From Captions To Gifts, These Are All The Kindergarten Graduation Ideas You Need
41 Memorial Day Quotes That Honor Soldiers & The Holiday