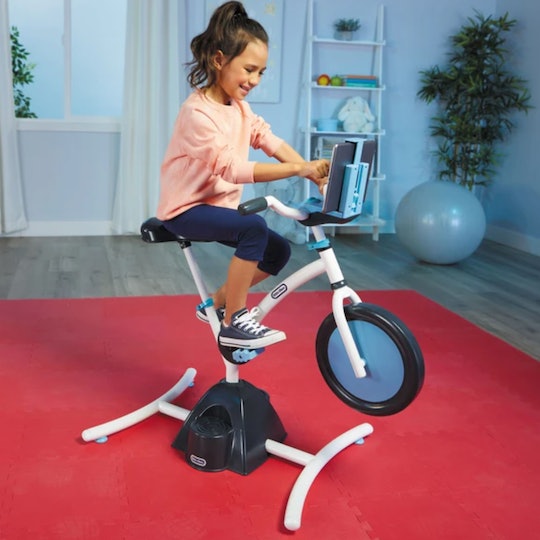 Not everyone is convinced that this is age-appropriate.

In the early stages of the coronavirus pandemic, the popularity of at-home spin bikes like Peloton skyrocketed. Now, a children’s toy company is hoping to get in on the action with a stationary bike toy for kids. Little Tikes released its Pelican Explore & Fit Cycle over the summer, marketing it as a way for kids to “have fun, learn, and exercise at the same time.” But not everyone is convinced children should be given toys that model exercise equipment.

Designed for children between the ages of 3 and 7 years old, the Little Tikes Pelican Explore & Fit Cycle allows children to pedal along to trainer guided adventure videos played on a phone or tablet that, although not included, can be attached to the toy thanks to an adjustable mount. “Kids see adults riding and they want to ride, too,” Little Tikes noted in marketing material for the toy. “Now they can.”

Riders can opt to ride along to any of the audio adventures built into the bike or pair the bike with a bluetooth device to play their own music through the bike. Kids can also access free guided adventure ride videos on YouTube to have high-energy trainers take them through places like a wooded forest trail, a dessert, rocky hills, a snow-packed mountain, or even on a roller coaster. “It’s like a cycling or spin class for kids,” Little Tikes noted on its website.

But do children aged 3 to 7 need a spin class? Child development experts aren’t convinced they do.

“Kids want to be part of the real world,” Lenore Skenazy, president of the nonprofit organization Let Grow, which advocates for outdoor play and childhood independence, told CNN Business. “A stationary bike doesn't prepare them for anything but moving their legs in a circular motion. You can burn calories on this, but you can't get to know your neighbors.”

According to the Child Development Institute, riding a bike or scooter encourages self and social confidence in children along with helping them build hand-eye coordination, balance, strength, muscle endurance, and reaction skills. What’s more, the act of learning how to ride a bike helps children learn persistence, a skill that can benefit them throughout their lives. With Little Tikes’ Pelican bike, children may get the benefit of physical activity but won’t reap the same social or achievement-building skills that riding an actual bike can build.

It should be noted that Little Tikes told CNN Business the Pelican was not meant to replace a regular bicycle. “We wanted to give the option for a safe and engaging experience alongside mom and dad's stationary bike," Kevin Bloomfield, Little Tikes’ vice president of product development, said.

And parents who’ve bought the Pelican bike for their child say it does have its benefits.

“My 6 year old has this and loves it,” one mom wrote on Twitter. “He’s still in virtual school and will often attend class on a tablet while cycling. In fact, he is much more engaged in class with the bike than without. It’s not a replacement for safe outdoor biking, but it has its benefits.”

Others argued the toy could provide opportunities for physical play to children who don’t have easy access to safe outdoor areas or who may have a single parent or caregiver that’s not always able to take them outside. “Consider the possibility that there are children who CANNOT play outside,” one person argued over Twitter. “Also consider that unlike yourself, not every kid has the benefit of a two -parent, dual-income home. This allows them to hang out nearby while a parent exercises.”

But of course, not all parents agree that it’s an appropriate toy for young children. Some have pushed back on the idea of marketing exercise and workouts to kids. “I adore my spin bike, but kids should be playing or biking outside, not ‘working out,’” one parent tweeted. “This stinks of diet culture aimed at kids. Solid NOPE from me.”

Love it or hate it, Little Tikes’ Pelican bike is here to stay — for now at least.