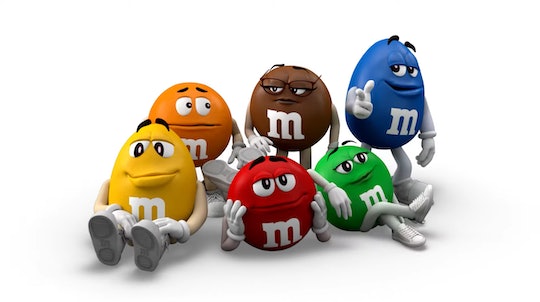 M&M's Iconic Characters Have Been Redesigned To Be More Inclusive

Mars Wrigley’s iconic Green M&M is trading in her heels for sneakers as part of the candy company’s global commitment to inclusivity. On Thursday, the candy company announced a series of changes to the M&M’s brand, including a more inclusive and unifying tone and modern makeovers for all of its candy-coated characters.

Some of the most notable changes to the M&M characters involve footwear. The Green M&M now wears white sneakers instead of white heeled go-go boots. The Brown M&M now wears a low, square-heeled pump instead of a stiletto heel. Both characters have also ditched the gender-specific “Ms.” honorific previously found in their names in an attempt to place the emphasis on their personality and not their gender.

According to CBS News, the Green M&M was given heeled go-go boots in 1997. Her new sneakers are meant to be “cool” and “laid back” and communicate her “effortless confidence,” Mars told the news outlet. While shoes may seem like a minor thing, Mars Wrigley North American President Anton Vincent assured CNN it’s something consumers have long paid close attention to. Over the years, the company has reportedly gotten quite a lot of feedback about their M&M character’s footwear, leading Vincent to deem them a “subtle” but important cue. The company is aiming to make all of its M&M characters (but especially its two female characters) more “current” and “representative” of consumers, Vincent told CNN.

M&M also revealed plans to improve the previously tense relationship between the Green and Brown M&M characters. The characters will now join “together throwing shine and not shade” in an effort to make them a “force supporting women,” CBS News has reported the brand said. Vincent also told CNN M&M had plans to feature its two female characters more prominently in ads to create a better gender balance.

By using their personalities instead of gender to differentiate and identify the candy characters, Mars is hoping to underscore the importance of self-expression and create “a world where everyone feels they belong and society is inclusive,” the company said in a recent press release.

“M&M’S has long been committed to creating colorful fun for all, and this purpose serves as a more concrete commitment to what we’ve always believed as a brand: that everyone has the right to enjoy moments of happiness, and fun is the most powerful way to help people feel that they belong,” Cathryn Sleight, Chief Growth Officer at Mars Wrigley, said in a statement. “As one of the world’s most iconic candy brands, who better to commit to a world with more moments of fun by increasing a sense of belonging around the globe than M&M’S?”

Other changes include the addition of laces to the Red and Yellow M&Ms’ shoes. The Orange M&M — often advertised as the most anxious M&M of the bunch — will also now have their previously untied shoelaces tied. Take a peek at the new M&M characters in the ad spot above.

More Like This
A New 'Golden Girls' Themed Restaurant Is Happening!
10 Dreamy Summer Popsicles To Indulge In Stat
LEGO Unveils New 'The Office' Playset That Even Features Dwight's Stapler In Jell-O
Netflix Has Lots For Families To Look Forward To This August