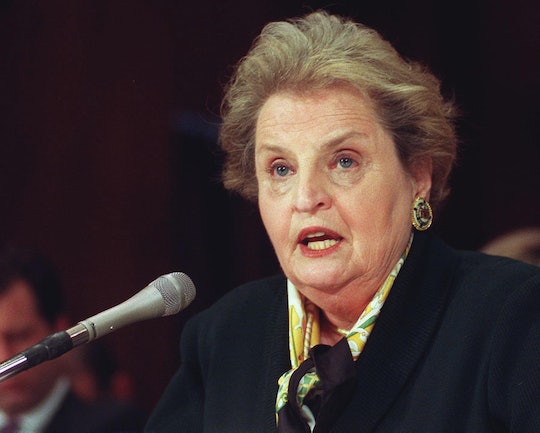 Madeleine Albright Remembered As “Loving Mother, Grandmother” After Her Death At 84

Madeleine Albright has died at the age of 84 after a battle with cancer. The first U.S. secretary of state was “surrounded by family and friends” when she passed, according to a statement issued by her family on Wednesday. Beyond being a trailblazing political figure and feminist icon, Albright was also known as a proud mother, grandmother, and more to her family and loved ones.

“We have lost a loving mother, grandmother, sister, aunt and friend,” Albright’s family said in a statement shared on Twitter. “[She was] a tireless champion of democracy and human rights.”

Born in Prague, Czechoslovakia in 1937, Albright served as U.S. ambassador to the United Nations before she made history as the first U.S. secretary of state, a position she held from 1997 to 2001 under Bill Clinton’s presidency and was, at the time, the highest-ranking woman in U.S. government. As secretary of state and beyond, Albright pushed for the expansion of NATO.

It wasn’t until the late ‘90s, after she became secretary of state at the age of 59, that Albright learned her family was Jewish and 26 of her family members were murdered in the Holocaust, according to The New York Times. Her parents, Josef Korbel and Anna Spiegelova who immigrated to Denver in 1948, had converted to Catholicism during World War II and never told Albright about their family’s Jewish background, The Washington Post reported.

As she broke glass ceilings, Albright was also raising a family with her husband Joseph Medill Patterson Albright. While the couple divorced in 1982, they welcomed three daughters together, all who’ve gone on to become mothers themselves and lead impressive careers.

Her twin daughters Alice and Anne Albright were born premature.

In 1961, Albright gave birth to her twin daughters, Alice and Anne, several weeks premature. Albright couldn't hold her newborn daughters as they were in the NICU, so she started to learn Russian to help pass the time, as she shared in a 2020 interview with the Aspen Institute podcast’s The Bridge.

Now in their 60s, Albright’s twin daughters also have impressive careers. Alice is the CEO of the Millennium Challenge Corporation, an independent U.S. Government foreign aid agency. Alice is a mother to two sons, David and Daniel. “They know their mommy works very hard doing things for other families,” Alice said of her children when asked if they appreciate the important work she does in the social sector during a 2009 interview with World Affairs Council, alongside her mother and two sisters.

Alice married Gregory Bowes in 1987, The New York Times reported at the time.

Albright’s daughter Anne studied law at Dartmouth College and is currently a judge for the 6th Circuit Court in Montgomery County in Maryland. Early on in her legal career as a public defender, Anne worried her mother a bit with her cases. “Mom was horrified,” Anne said in 2009 when asked about her work as a public defender and the “rough business” of it all. She also shared a story about calling her mother to let her know she was going to be late to meet her for dinner and simply said “I’m going to be late... I’m in jail.” Over time, Anne shared, her mom “got used to that answer.”

Anne married Geoffrey Watson in 1990, according to The New York Times. Anne has a daughter who’s already following in her footsteps... athletically that is. Anne was goalie on the ice hockey team at Dartmouth College and her daughter is also a goalie.

Albright’s daughter Katherine, who goes by Katie, is an attorney and currently the CEO of Safe and Sound, a San Francisco-based child advocacy organization that works to prevent child abuse. During the 2009 interview with World Affairs Council, Albright shared that her daughter had shown a strong interest in helping children from a very young age and that passion has carried on to her career. In fact, according to Albright, Katie wrote an essay on how she needed a to create a new language to help children. “That was her whole purpose of going to law school,” Albright said in 2009.

Katie has two children, as she shared in the same 2009 interview. More recently, she wrote about her “privilege as a white mother raising a white son” in a blog post for the Aspen Institute. “When my son was two years old, he walked out of our house. We had left a door open to work in our yard. He slipped out, and a neighbor found him a few houses down. I was terrified, ashamed, grateful, and relieved. The story has become family lore in our home, but an experience with no arrest, no child welfare, no police, no public humiliation or shame,” she wrote in an April 2021 post about the disparities in the child welfare system.

Albright spoke candidly about the challenges of being a working mom.

In a 2012 interview with MAKERS, Albright spoke about how her daughters also understand the difficult balance working moms have to manage. “I think that women can do everything. They just can’t do it all the same time,” she said. “I have three daughters, all of whom are married and have children and all who have very dynamic jobs. We talk about this all the time. It’s not easy, so there’s no one particular path or role. Everybody has to work it out for themselves but to understand that it’s not simple.”

Though it surely was not simple, Albright’s daughters always knew the sky was the limit. “Growing up, we could not have been more lucky,” Alice told Aspen Institute podcast’s The Bridge in 2020. “It never crossed our minds, ever, that we couldn’t do exactly what we wanted. We were privileged.”