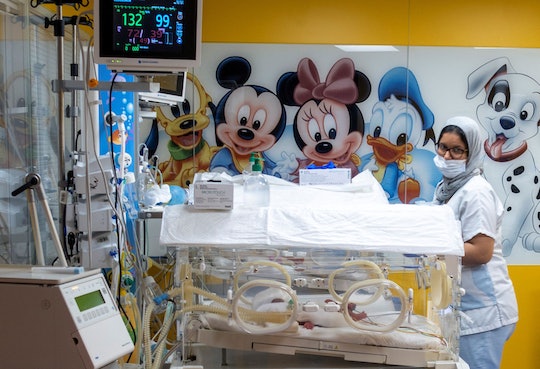 A 25-Year-Old Mom Thought She Was Pregnant With 7 Babies. She Gave Birth To 9.

Mom and babies are all reported to be “doing well so far.”

After being told by doctors she was pregnant with septuplets, a woman from the West African country of Mali gave birth to nine babies on Tuesday in a rare case of nonuplets. Both the mother, 25-year-old Halima Cisse, and the nonuplets, who were delivered via C-section, were said to be “doing well,” according to Mali’s Minister of Health. The nonuplets’ birth is thought to have broken the current world record for the most living children born in a single birth.

“The mother and babies are doing well so far,” Malian Health Minister Fanta Siby said in a statement to Agence France-Presse.

Mali's health ministry said doctors had expected Cisse to give birth to a set of septuplets after multiple ultrasounds conducted in both Mali and Morocco, where Cisse was sent so she could receive specialist care, revealed just seven babies. On Tuesday, however, Cisse’s delivery team was surprised to find the 25-year-old was actually carrying nonuplets. Five girls and four boys were all successfully delivered at 30 weeks gestation, according to the Associated Press.

The Mali Ministry of Health facilitated Cisse’s transfer to Morocco after doctors in Bamako, the country’s capital, expressed concern for her health and the babies’ chances of survival. Malian officials have said Cisse was admitted to a clinic in Casablanca on March 30, just four days before she gave birth.

In an interview with BBC Afrique, Cisse’s husband said he was overjoyed by news of the nonuplets' birth and not worried about how the family would adjust to being a family of 12 (Cisse and her husband already had one child at the time of the nonuplets’ birth.)

"I'm very happy," the BBC reported Adjudant Kader Arby said. “God gave us these children. He is the one to decide what will happen to them. I'm not worried about that. When the almighty does something, he knows why.”

While cases of nonuplets are rare, they have happened before. In 1971, an Australian woman gave birth to nonuplets, two of whom were stillborn. According to The New York Times, three of the Australian nonuplets died less than 24 hours after their birth with the remaining four following over the course of the next six days. Then a woman in Malaysia gave birth to nonuplets in 1999, although none of those babies survived longer than six hours.

The Guinness Book of World Records told the Associated Press they were working to verify the Cisse’s delivery in Morocco as the current record for the most living children born during a single birth was eight. The current title belongs to Nadya Suleman, also known as Octomom, whose octuplets are now 12 years old. Once verified, Cisse and her nonuplets are expected to be the new world-record holders.

More Like This
Can You Do Zumba While Pregnant? Experts Weigh In
20 Perfectly Proper Tudor Baby Names
What You Need To Know About Eating Burrata During Pregnancy
AAP Now Recommends Mothers Breastfeed For 2 Years Or More In New Guidelines