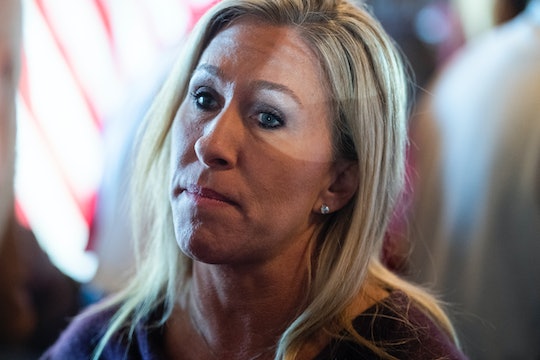 In a resurfaced video from 2019, Greene is seen calling Hogg a coward when he refused to engage with her.

Before she won a seat in the House of Representatives after running unopposed in 2020, Rep. Marjorie Taylor Greene harassed Parkland survivor David Hogg outside the U.S. Capitol building, peppering him with questions and baseless claims before calling him a coward. Footage of the incident has recently gone viral after the parent of a child shot and killed in the Parkland school shooting shared the video on Twitter in an attempt to shine a light on the freshman lawmaker.

More Like This
Obama Said The Sweetest Thing About His “Friend” & Family Dog Bo
Wait, Did The Government Actually Do Something For Parents?
The Obamas’ New Family Rule? Get Vaccinated If You Want To Hang Out With Us
A Volleyball Coach Wasn’t Allowed To Bring Her Breastfeeding Baby Into A Tournament

"[Rep. Greene], is this you harassing @davidhogg111 weeks after the Parkland shooting, that my daughter was killed in & he was in?" Fred Guttenberg, whose 14-year-old daughter Jaime was one of 14 students killed in the February 2018 shooting at Marjory Stoneman Douglas High School, wrote in a tweet directed at the lawmaker on Wednesday. "Calling him a coward for ignoring your insanity."

The video, which was reportedly filmed by a friend of Greene's sometime in March 2019, shows Greene approach Hogg as he is walking near the U.S. Capitol. Between peppering Hogg with questions about his advocacy for gun laws, Greene claimed, without evidence, that the Parkland shooter "wouldn’t have killed anybody" if the school's resource officer "had done his job."

"You know, if school zones were protected by security guards with guns there would be no mass shootings at schools," Greene claimed. "Do you know that the best way to stop a bad guy with a gun is with a good guy with a gun." (Research from Harvard has shown that armed individuals, aka "good guys," only defended themselves with their guns in less than 1% of violent crimes.)

Hogg does not respond or engage with Greene in the video, but instead keeps walking. "He’s a coward," Greene said. "He can’t say one word because he can’t defend his stance." Earlier in the video, Greene claimed, without evidence, that Hogg was being paid to support gun control by George Soros and Everytown, among others.

"After surviving gun violence this is just 1/10 of 1% of the harassment advocates for gun control have to deal with," Hogg tweeted Wednesday in response to the video resurfacing. "Every day we are forced to act and fight through all our trauma to fight for those that can't because they were killed due to people like you refusing to do your job and protect kids not guns. Also, the thousands I've had to spend on of therapy due [to] the trauma from the shooting and due to harassment and threats like this but also so much worse is absolutely ridiculous."

The incident in 2019 wasn't the only time Greene has attacked Hogg. According to CNN, the lawmaker has previously mocked Hogg's physical body and referred to him as "#littleHitler" in posts that have recently been scrubbed from her Facebook.

Fellow Parkland survivor Lauren Hogg, who was with Hogg on the day Greene attempted to confront him, also characterized Greene's confrontation as evidence of the severe harassment she and Hogg received following the shooting at their school. "I have more PTSD from the harassment and conspiracy theorists that we've had to deal with than I do going through the actual shooting," she tweeted.

Greene tells Romper she was "going from office to office in the Senate" at the time the video was filmed in 2019 "to oppose the radical gun control agenda that David Hogg was pushing" and that she understands the fear a school shooting can cause.

"In 11th grade, one of my fellow students took our school hostage with a gun he brought to our 'gun-free' school," Greene says. "I understand that fear firsthand and I will always work to protect our gun rights so that Americans can defend themselves and others against bad people intent to harm or kill them."

Many of Greene's fellow members of Congress have expressed shock and disgust at the behavior she exhibited in the now-viral video. "Can't believe this person is my colleague on the EDUCATION & Labor Committee," Rep. Mark Pocan tweeted.

"Her blatant lies and irresponsible acts are dangerous, repulsive, and demand swift consequences from the US House," Rep. Debbie Wasserman tweeted of Greene.

Some members of Congress have even introduced a resolution to expel Greene from the House of Representatives. "I don't need to explain why @RepMTG is a clear and present danger to Congress and our democracy," Rep. Jimmy Gomez tweeted Wednesday. "She did it herself. And she must go. I'm introducing a resolution to expel her from Congress immediately."

While young gun control advocates have said they would like to see Greene held accountable for her behavior, they're not holding their breath. "It's bizarre to me that someone who can act like that towards another human being, much less towards a teenager who survived a mass shooting, is allowed to hold power," March for Our Lives activist and college student Linnea Stanton, who was with Hogg when he was confronted by Greene, told The Guardian. "I would love to see some accountability or her acknowledging what she did, but it feels like wishful thinking. The last four years have showed time and again there will be no consequences."