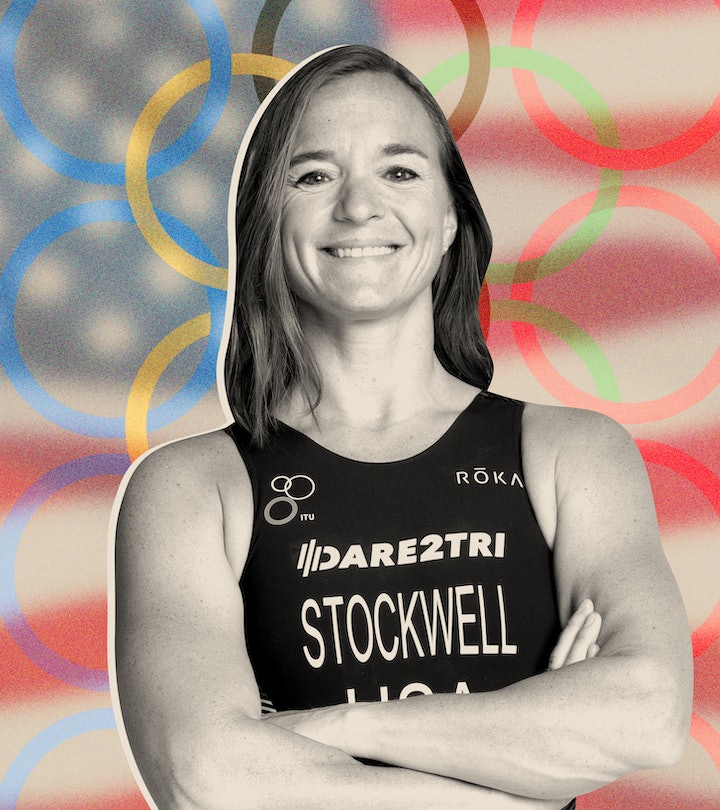 “I want them to look at me and realize that just because you look a little bit different, like mommy doesn't have a leg, doesn't mean you can't get out there and dream big.”

Triathlete Melissa Stockwell represents many “firsts.” She was a first lieutenant in the 1st Calvary Division of the United States Army. In 2004, her unarmored humvee was thrown into a guardrail by an roadside bomb, costing Stockwell her left leg above the knee and making her the first female soldier to lose a limb in the Iraq War. But just four years later, in 2008, she was the first Iraq War veteran to represent the United States at the Paralympics when she competed in swimming events at the 2008 Games in Beijing. Rio followed in 2016 and Tokyo makes her third Paralympics in 13 years.

Despite all she’s already accomplished, Stockwell had measured expectations going into the 2020 Tokyo Paralympics. Shortly after she announced she was headed to Toyko, she crashed her bike into a tree while training, severely bruising her pelvis and fracturing her back in three places. Though doctors assured her it was “the best place to break a back” and surgery was not needed, the accident severely affected her ability to train. Nevertheless, she was determined to continue on to Tokyo to represent the United States and her family, broken back be damned — and on August 28, she placed fifth in Women’s Triathlon at the Games. “I felt like I had won the race,” she tweeted.

When she’s not training, she works as a prosthetist in Colorado, where she lives with her husband Brian and children Dallas, 6 and Millie, 4, and is the co-founder of the Dare2tri Paratriathlon Club, a non-profit that helps athletes with physical disabilities get into the sport of triathlon. Romper spoke to Stockwell in early August about the Tokyo Games, parenthood, and what she hopes to accomplish in both.

Romper: So, as a mom and an elite athlete, what does a typical day look like for you?

MS: Well, we'll start with today. This morning, I was up, my alarm went off about 6:30. I was downstairs on the treadmill — kind of this unweighted treadmill thing I have going on with the ability to run — from about 6:45 to 7:30. My husband got the kids up. I came upstairs. He got them breakfast. We were out the door by 8:15 to bring my daughter to daycare and my son to his summer camp. And then I went to the Olympic training center where I swam from 9:30 to 11:00. So we basically swim every morning. Came home, jumped on a few calls. So kind of in the afternoon there's work stuff, kid stuff, grocery shopping, whatever it may be. And then I will jump off the call, get in another hour and a half bike ride before I go pick my kids up. Then tonight, my son has hockey and soccer. There's all sorts of activities that are happening in the evening. I would say typically I get about three hours of training in. The days are busy.

How has being a mom informed who you are as an athlete or how you perform as an athlete? And vice versa: how does being an athlete affect your parenting?

MS: I feel like I'm doing sports or trying to achieve my goals and my dreams for more than me. It's for my children also. I want them to look at me and realize that just because you look a little bit different, like mommy doesn't have a leg, doesn't mean you can't get out there and dream big. But also I want them to see me have these big dreams and to reach high for them and to go for them in hopes that they kind of have big dreams of themselves down the line.

It's also great because athletics is such a part of my life, but I have something else to come home to. If I have a bad workout or a bad race, when I come home at the end of the day, I'm Mom. It kind of brings you down a little bit, realizing that it's not all about athletics and sports and there's something on the other side of it all. So it's great. I also want my kids to see me with that sportsmanship or to treat my competitors the way that I would want to be treated. I think as parents we all want our kids to grow up and to be kind humans, and that’s very much along the lines of the Proctor & Gamble Lead with Love campaign.

That was a long answer to a short question, but being a mom has fully enhanced so much of my athleticism.

I’m a reporter: I love long answers to short questions. But speaking of P&G, I know that your charity, Dare2tri, was selected to be a beneficiary of the campaign. Can you tell me more about that?

MS: Triathlon can be very daunting, especially for somebody who has a disability. Maybe you're missing a limb or in a wheelchair. And we kind of take away all the barriers it would take to get to that starting line, whether it's with equipment, with training, with financial assistance. And the impact that we have had on these athletes who start, they're doing their very first race, they cross the finish line and just the self confidence, the self worth that they get is... I mean, you can't beat it. It's incredible just the impact you can have by just showing someone what they can do.

Dare2tri was very proud to be awarded $10,000 for the Athletes for Good Fund, which goes to charitable organizations that support Olympic and Paralympic athletes. In an organization like Dare2tri, it's incredible how far that money will go and how many athletes will be reached.

Have you always been athletic? I think I read somewhere that your first love was gymnastics...

MS: Yep. I was a big gymnast when I was younger; I made it pretty high in the sport, but obviously never made the Games. But it started off in my passion for sports: what they could do, how they can contribute to being the best person we can be.

“[I want my children to know] it's not always an uphill climb. You've got to have bad days or bad races or whatever they get into, bad games, to realize how good the good ones are.”

If your children wanted to follow in your footsteps in competing at an elite level, what advice would you give them?

MS: That it's not always an uphill climb. You've got to have bad days or bad races or whatever they get into, bad games, to realize how good the good ones are. So my advice would be that you know, there's going to be some times that are tough and they're hard, but that makes the times that you're on top even better. So that and just to be the best team player you can be to show that sportsmanship, to get out there and to shake your competitor's hand and just be the person that someone else would want you to be.

Is there an athlete who inspires you?

MS: Allyson Felix. She’s such an icon of an athlete that for her to speak out about the importance and hardships of being a mom and being an elite athlete goes a long way. And then she gets out there and she crushes it on the track. I definitely idolize her for her athleticism but also being a mom and coming back from having her little girl to being where she is now and just speaking out about important issues that she can make a difference in.

Other than ideally medalling, do you have personal goals for Tokyo?

MS: It probably sounds so cliché, but I'm so thrilled that I'm even there. I've trained for three and a half years for this moment, so just to hopefully have the best race I can have and come across the finish line smiling. Obviously best case, is the podium somewhere, but if not, just to enjoy my time being there and be happy with that.