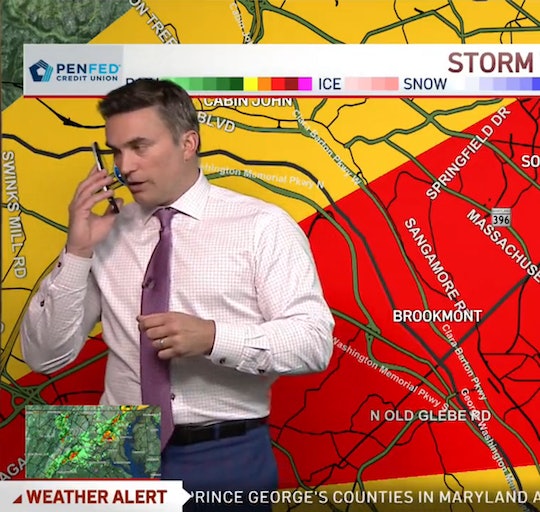 Because this is what dads do.

On March 31, Doug Kammerer called his kids to warn them of a tornado warning headed for their Maryland neighborhood. It’s a classic dad move — they love looking out for us — but it’s also part of the job when you’re the chief meteorologist for NBC Washington. But what made this exchange memorable is that the meteorologist warned his kids a tornado was coming on air.

In a clip shared across social media, Kammerer can be seen delivering a weather report of a tornado warning while clearly distracted by his phone. As he explained where the tornado was expected to touch down, noting that it was going to go right over his house, he interrupted himself when his son answered the phone. “You there buddy?”

“Yeah,” his son can be heard saying.

Phone aside, he went back to giving a weather report to the community at large.

“Just, you know: gotta warn my kids!” he said. “Because I know what my kids are doing right now. They’re probably online gaming and they’re not seeing this.”

Kammerer later shared on Twitter that his children were safe, but that it was a bit frightening. “Kids were home alone and I knew they were not watching me on TV!” he wrote. “Scary moment for me though, I was freaking out inside a bit.”

In spite of all of that, Kammerer kept cool under pressure and went right back to reporting the weather, including the fact that, minutes later, the warning was canceled.

More Like This
14 Children & 1 Teacher Killed In Mass Shooting At Texas Elementary School
What Is Monkeypox & Should You Be Worried? Here’s What You Need To Know
Mom Gave Birth On The Side Of The Road... With Her Five Other Kids In The Car
This Mom Gave Birth On Graduation Day, So The University Brought Her Degree To Her