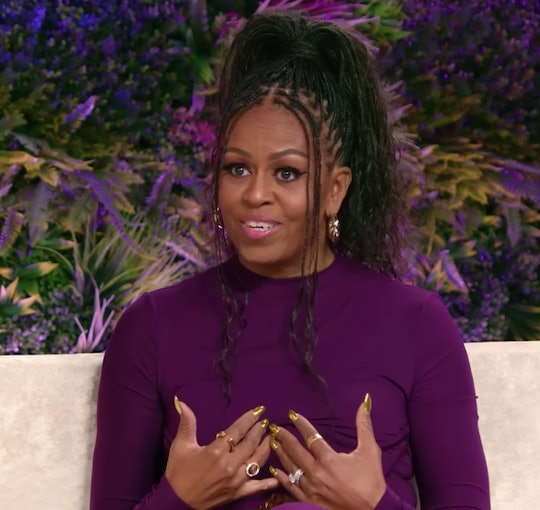 “That's when the measuring starts, because you got this project and guess what: little kids? They’re terrorists.”

In her new book The Light We Carry: Overcoming in Uncertain Times, Michelle Obama highlights periods, both in her own life and in the world at large, of trepidation and doubt. And in a recent interview promoting that book, Obama talked about a period of uncertainty, so to speak, in her marriage. Specifically, the 10 years she “couldn’t stand” her husband, former President Barack Obama.

In an interview on REVOLT that lasted more than 90 minutes with Angie Martinez, Kelly Rowland, Tina Lawson, Winnie Harlow, and H.E.R., the former first lady discussed boundaries, overcoming self-doubt, and parenting, among other things. But it’s her comments regarding her marriage, predictably perhaps, that have garnered the most discussion.

In discussing relationships, Obama admitted, “There were 10 years where I couldn't stand my husband! And guess when it happened? When those kids were little, right?”

In the now viral clip, Obama talked about how, as a child-free couple, she and the former president had no problem with the things that come up with two ambitious people pursuing demanding careers. Travel for work? Well that’s just an opportunity to get the TV to yourself! But when kids come around, as she said, “that’s when the measuring starts.”

Obama speaking on the difficulties of marriage.

“The minute we had kids,” she said with a somewhat playful air, “it was like, ‘Where are you going? And how far? You start measuring it’s like ‘how many diapers did you change’ and ‘Oh you’re golfing? Oh you have time to golf?’ That's when the measuring starts, because you got this project and guess what: little kids? They’re terrorists.”

The line got laughter, but Obama supported her thesis with (cheeky) evidence. “They have demands, they don’t talk, they’re poor communicators, they cry all the time, they’re irrational, and you love them more than anything and so you can’t blame them ... so you turn that ire on each other.”

Her conclusion, however, is less dire: the 10 really hard years have been worth the 30 she and President Obama have been married. “Marriage isn't 50/50, ever,” she concluded. The percentages vacillate between couples. 70/30, 60/40. Ultimately, she said, deciding whether the difficulty is worth the marriage is about “know[ing] your person.” She went on to share that she wants to be open about the “work” of marriage, or any relationship, because she doesn’t want young people to give up on a relationship when the honeymoon phase is over.

On social media reaction to Obama’s views has run the gamut, but appears primarily positive.

Most responses to Obama’s statements were positive.

“Culture has us living in LaLa Land so much that people are easily offended by facts,” muses Twitter user @elowusu. “Marriage and parenting are romanticized a whooole lot. They're good and dandy but they require WORK and lots of it.”

“I love that Michelle Obama talked candidly about marriage,” tweets @RoseDaWiz. “I’ve been with my husband 21 years, married over 16 years. MARRIAGE IS HARD! Especially once children come. There are times when effort is lopsided, but don’t give up! It should be a partnership worth fighting for.”

Others, however, were less appreciative of the idea that a decade of unhappiness should be normalized.

“I want Michelle Obama to stop selling this 'marriage is pain' narrative cause, baby I REFUSE,” @iamlexstylz says, contrary to the many positive messages online. “I don’t want to be in a relationship where it’s expected of me to ‘be prepared for years-long stretches of discomfort in a romantic partnership.’”

Twitter user @alwaystheself had a somewhat more nuanced take. “I think the way Michelle Obama feels about her bad marriage is the way I feel about academia. It was hellish for a good long time but I’ve been unusually fortunate and I don’t regret choosing this path. Difference is, I know my circumstances are extremely privileged. She doesn’t.”

Pop culture podcaster Chanté Joseph took a somewhat jokey tone with the viral moment. “It feels like Michelle Obama is on a personal mission to destroy the institution of marriage and I love that for her. Nobody makes marriage sound as unappealing as she does,” she tweeted. “She keeps sitting for these interviews and discussions telling us how miserable long stretches of her life was with Barack as if it’s so cute and inspirational but she makes it sound like servitude. What’s the end goal here? What do want us to do with this information?”

Chanté Joseph took a cheeky approach to the discourse.

For @surlybassey, the discourse was bigger than one couple. “The Michelle Obama marriage discourse is really continuing a convo started over 30 years ago when conservatives and liberals (of all races) became obsessed with Black marriage rates and began evangelizing about the benefits of marriage...”

Another category of response was, of course, those defending Obama against detractors, most bearing some sentiment of what Twitter user @iredumare asserted: “Michelle Obama is just simply telling you people marriage isn’t for those looking for fantasy.”

Take it or leave it: Obama is telling it as she sees it.

Whatever one’s views on Obama’s messages about marriage, most people can probably agree that her assertion that, good or bad, marriage gets more difficult when you introduce baby “terrorists” into the picture!