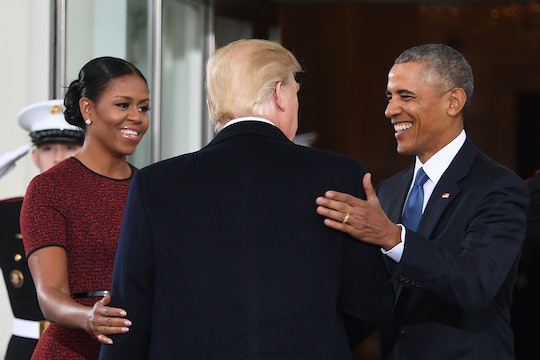 Michelle Obama's Message As Trump Refuses To Concede: "This Isn’t A Game."

The former first lady opened up about having to overcome her personal feelings about Trump to welcome him to the White House.

As President Donald Trump continues to block government officials from working with President-elect Joe Biden's transition team, a former first lady has opened up about how difficult, but absolutely necessary it is to put personal feelings aside after an election loss. On Monday, Michelle Obama reflected on Trump's refusal to concede the 2020 election in an Instagram post that touched on how she'd overcome her own personal feelings about Trump in order to make him and First Lady Melania Trump feel welcome and at ease when taking over the White House following the 2016 election.

"I want to urge all Americans, especially our nation’s leaders, regardless of party, to honor the electoral process and do your part to encourage a smooth transition of power," Obama wrote. "Just as sitting presidents have done throughout our history."

In her Instagram post, Obama admitted she'd been "hurt and disappointed" by the results of the 2016 election, which she noted included "a far closer margin than the one we've seen this year." Still, she recognized the decision was not hers alone to make and instead she needed to heed the will of voters.

"The American people had spoken," she wrote. "And one of the great responsibilities of the presidency is to listen when they do. So my husband and I instructed our staff to do what George and Laura Bush had done for us: run a respectful, seamless transition of power — one of the hallmarks of American democracy."

Despite the 2020 presidential election having been called in Biden's favor more than a week ago, President Trump has refused to concede and has continued to stonewall members of the incoming administration. According to Reuters, Trump has blocked Biden and his team from receiving classified intelligence briefings. Additionally, BuzzFeed News has reported Trump-appointed General Services Administrator Emily Murphy has blocked Biden's transition team from accessing federal funds and facilities traditionally used by a president-elect to establish their incoming administration ahead of Inauguration Day in January.

On Instagram, Obama noted that despite her personal feelings about Trump, she and then-president Barack Obama had invited him, his family, and his transition team to the White House and directed their staff to share a slew of detailed information with them. "I have to be honest and say that none of this was easy for me," she wrote. "Donald Trump had spread racist lies about my husband that had put my family in danger. That wasn’t something I was ready to forgive. But I knew that, for the sake of our country, I had to find the strength and maturity to put my anger aside."

A few days after the 2016 election, Obama hosted a tea for Melania at the White House's private residence. There the two were reported by NBC News to have discussed Obama's experience in raising children at the White House before Obama gave the incoming first lady a tour of the residence.

"I knew in my heart it was the right thing to do — because our democracy is so much bigger than anybody’s ego," Obama wrote on Instagram Monday. "Our love of country requires us to respect the results of an election even when we don’t like them or wish it had gone differently — the presidency doesn’t belong to any one individual or any one party. To pretend that it does, to play along with these groundless conspiracy theories — whether for personal or political gain — is to put our country’s health and security in danger. This isn’t a game."