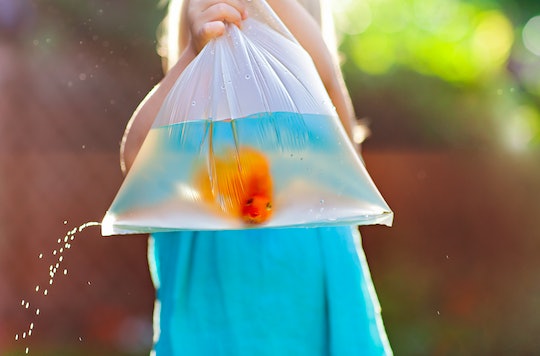 When the goldfish recently found in Minnesota’s Keller Lake were first put there they were likely small enough to fit in the palm of your hand. But over time, with a 72-acre lake to play in, those goldfish became giants. Now, the nearby city of Burnsville is urging pet owners not to release unwanted goldfish into natural lakes and ponds as the oversized fish are troublesome and invasive.

“Please don't release your pet goldfish into ponds and lakes,” officials from the city of Burnsville tweeted. “They grow bigger than you think and contribute to poor water quality by mucking up the bottom sediments and uprooting plants.”

Photos shared over Burnsville’s Twitter account showed a number of goldfish so large they had to be held with two hands. City officials said a number of these oversized goldfish had recently been found in Keller Lake.

This isn’t the first time a city in Minnesota has found one of its lakes had become overrun with goldfish. In November, wildlife officials in the Minneapolis suburb of Chaska told the Kansas City Star they had estimated some 500,000 invasive goldfish were living in Big Woods Lake. They began capturing the goldfish using nets and removing them by the truckload.

What’s more, Minnesota isn’t the only state to struggle with non-native goldfish. In 2017, U.S. Forest Service biologists working within the Lake Tahoe Basin Management Unit reported often finding goldfish, whom they believed were harming lake clarity by encouraging algae growth, in Lake Tahoe. “We believe that these goldfish were originally introduced to Lake Tahoe by well-intentioned pet owners,” aquatic biologist Maura Santora said in a statement shared by the US Department of Agriculture. “If we can persuade the public not to release their aquarium fish or leftover bait fish into the lake, we will have made a critical step in addressing the problem of invasive species.”

Although it may be sort of neat to see goldfish ballooned up to the size of a football swimming through your local lake, today’s goldfish really aren’t what you’d consider a wild animal. According to Nutrafin Aquatic News, it was during the Tang dynasty in imperial China, which lasted from 618 to 906 A.D., that people began to selectively breed carp with genetic mutations that resulted in them having gold or yellowish color for domesticated ornamental ponds. This selective domesticated breeding of “goldfish” carp continued through the Song dynasty until goldfish were being bred and raised indoors as household pets as well during the Ming dynasty. It would be centuries, however, before goldfish would arrive in the United States — National Geographic places their introduction somewhere within the 1800s.

But while goldfish are considered pets inside homes, agencies like U.S. Fish and Wildlife Service have long considered goldfish living in the wild to be pests. “From Lake St. Clair outside of Detroit to Lake Tahoe in Nevada, large goldfish found in public waters have made the news as they damage waterways with their voracious appetites and their tendency to carry parasites,” the government agency noted in a 2017 blog post. “In places like Teller Lake near Boulder, Colorado, the goldfish got frisky and multiplied like Tribbles on Star Trek. The result was the seemingly benign goldfishes crowded out the native fish supposed to be there.”

Instead of releasing unwanted goldfish into local ponds or lakes (or flushing them down the toilet), the U.S. Fish and Wildlife Service encouraged goldfish owners to explore adoption options, including donating the goldfish to a school or pet store. Veterinarians can also assist goldfish owners in humanely releasing of their pet should ownership of the fish become too much.

Additionally, parents can help children understand the responsibilities that come along with owning a goldfish with Helen Palmer’s A Fish Out of Water.