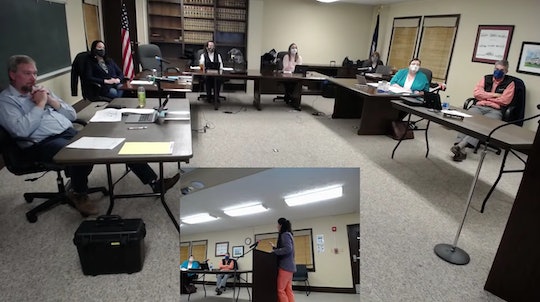 “My children will not come to school on Monday with a mask on. That’s not happening. And I will bring every single gun loaded and ready. “

A Virginia woman has been charged with making oral threats on school property after she told the Page County School Board she would bring loaded guns to her children’s school if the board voted to maintain its mask mandate. The Page County School Board met Thursday to discuss its mask mandate after Virginia Gov. Glenn Youngkin issued an executive order reaffirming parents’ rights to decide whether their child should wear a mask when at school.

“No mask mandates,” a woman police later identified as Amelia Ruffner King told the school board during its citizen comment period. “My children will not come to school on Monday with a mask on. That’s not happening. And I will bring every single gun loaded and ready. I will call every—”

King was cut then off from speaking by the school board, who notified her that her allotted three minutes of speaking time had ended.

"I'll see you all on Monday,” she said before leaving the meeting.

In a joint statement issued Friday, Page County Division Superintendent Antonia M. Fox and School Board Chair Megan Gordon said the district did not take King’s statements “lightly” and was in contact with local law enforcement. “Not only do comments such as these go against everything we wish to model for our students, they go against the very nature of how we as a community should interact with each other,” the statement read. “Violence and threats are never acceptable or appropriate. This kind of behavior is not tolerated from our students, faculty, staff, nor will it be tolerated by parents or guests of our school division.”

News of King’s comments generated debate among parents on the Page County Public Schools Facebook page with at least one parent inquiring about keeping their children home out of an abundance of caution.

“Can we have the option the keep our kids home and do virtual learning on Monday, please?” one parent questioned the district. “I’m sorry but I’m terrified to send my baby to school now, I would’ve kept them home today had I heard about this earlier.”

The Luray Police Department announced Friday that it had charged King with making an oral threat while on school property and that she had since been released on a $5,000 bond. In a statement released on Facebook, they said King immediately contacted police to apologize after realizing her statement had generated public alarm.

According to police, King claimed, “the statement was not intended the way it was perceived.”

King is also reported to have emailed an apology to the school board. “I in no way meant to imply all guns loaded as in actual firearms, but rather all resources I can muster to make sure that my children get to attend school without masks," CBS News quoted King as having written in her apology. “My sincere apologies for my poor choice in words.”

Before ending their meeting on Thursday, the Page County School Board voted to amend their mask mandate to make wearing face coverings optional in light of Gov. Youngkin’s recent executive order, WUSA9 reported. According to the news outlet, parents will now be able to opt their children out of having to wear masks at school.

Due to the threat, Fox and Gordon have arranged for both the Page County Sheriff’s Office and the Luray Police Department to provide an additional police presence on all of the district’s school campuses on Monday.