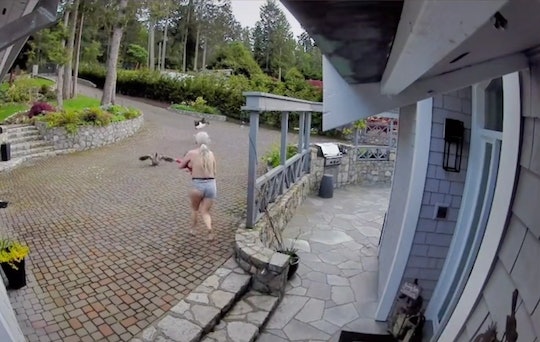 Cait Oakley was breastfeeding her daughter when she leapt into action to save her pet goose from an eagle.

We’ve all been there: you’re breastfeeding your baby when your pet goose starts honking outside. Before you know it, a bald eagle has grabbed it by the neck and tries to fly off. “Not this time,” you say to yourself. So you and your nursing child run to fight the majestic eagle (wearing only your partner’s boxer shorts, naturally). You know the drill... OK, maybe you don’t, but Cait Oakley does, and — thank goodness — there’s video in which the underwear-clad mom chases the eagle from her pet goose while breastfeeding.

Oakley lives with her husband, Mike, and three children in North Saanich on Vancouver Island, where she documents motherhood and home life for her Instagram account @caitoaks. There you can watch her daily activities, which mostly consists of raising three kids (two under two), growing vegetables, and keeping chickens and geese. One of those geese, Frankie, even has her own TikTok account (run by Mike) where her most viral video — captured via a home security camera — has been viewed over 11 million times (and counting). That just makes sense, since it’s the most heroic, absurd, and yet somehow extremely relatable videos we’ve ever seen.

“We have lost 3 chickens in the last week,” the caption for the video reads. “Mama bear mid-breastfeeding protecting her sweet Frankie. Officially living at a zoo.”

Franky the Goose and her human mom, Cait, have gone viral in the past few days.

Honestly? Multitasking to the point where you’re nursing a child as you battle a massive bird of prey for your pet goose’s life feels like a metaphor for modern motherhood.

Since going viral, Oakley has taken to her Instagram account to clear a few things up, including the fact that she never expected to get so much attention. “I would like to say that it was laundry day,” she says, “and I was wearing Mike’s boxers and not tighty whiteys as one person kindly pointed out.”

She also addressed the question of why she would have a pet goose in the first place. “Why wouldn’t I have a pet goose,” she pointed out. “She follows me around the yard and nips my butt for treats. What girl wouldn’t want that?”

But while the daring rescue is extraordinary, it’s also just an example of the most ordinary kind of reality: the baby needs to get fed, the laundry needs to get done, the bald eagle needs to be chased from carrying off the goose by the neck. “As a mom of three I’m always breastfeeding and it’s so natural, that’s mom life summed up,” she told Canada’s CHEK. “Something is always going on when I’m feeding her and I’m always on the go.”

And for those concerned for Frankie’s welfare, there’s no reason to worry. Oakley assured her Instagram followers that her “little internet sensation” is “a-OK.”

More Like This
This Reddit Post About Two Sisters In A Fight Over Breast Milk Is Complicated & So Sad
Is It Safe to Take Ibuprofen While Breastfeeding?
AAP Now Recommends Mothers Breastfeed For 2 Years Or More In New Guidelines
How To Breastfeed A Baby With A Cleft Lip Or Cleft Palate