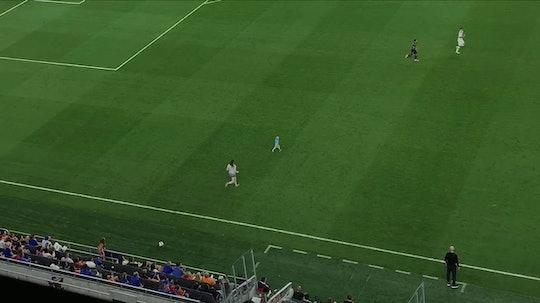 The 2-year-old was eager to join the action on the field at TQL Stadium in Ohio.

An Ohio mom has gone viral after cameras captured her sprint onto the field during a recent match between FC Cincinnati and Orlando City SC. But this mom wasn’t looking to disrupt the game. She was looking to save it. From her toddler.

As players from both teams followed the ball down to the south half of the field at TWL Stadium on Aug.7, 2-year-old Zaydek Carpenter slipped out of his seat in the stands, crawled under a safety rail, and dashed onto the north half of the field. Cameras captured the toddler’s daring bolt onto the soccer field, which included a cheeky over-the-shoulder glance parents of similarly talented escape-artist toddlers will likely know all too well, as well as his mom’s quick sprint to bring the toddler back to his seat.

Footage shared by Major League Soccer showed Carpenter’s mother, who the Cincinnati Enquirer identified as Morgan Tucker, immediately climb over the rail Carpenter had slipped under and follow him onto the field. Although Carpenter makes it past the sidelines and onto the field, his mom is hot on his heels.

But Carpenter’s mad dash to join the game doesn’t last long. Within seconds his mom has caught up with him, scooped him up using a rear slide tackle maneuver, and sprinted back to the stands with him in her arms.

“A young pitch invader was quickly scooped up by their own personal security detail without incident,” Cincinnati Enquirer photographer Sam Greene tweeted when sharing photos of Carpenter’s attempted field invasion. “Zaydek and his mom had a great time at the game,” Greene wrote in a separate tweet, giving fans the end-of-game update they needed.

And while Carpenter’s field invasion could technically be categorized as a match disturbance, both Major League Soccer (MLS) and Orlando City SC have laughed off the incident. “We hope this mother and her young pitch invader are having a great day,” MLS tweeted when sharing a video of Carpenter’s attempted invasion.

But perhaps it’s FC Cincinnati who has had the best reaction of all. “Future homegrown signing,” the club tweeted in response to Carpenter’s on-field run. “Calling it now.”