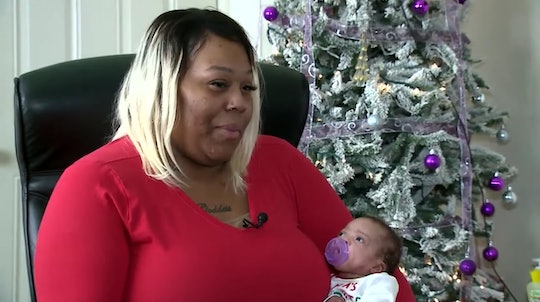 The Missouri mom asked her ICU nurse to be the baby's godmother.

A Missouri woman was able to bring her newborn daughter home just in time for the Christmas holiday following a lengthy battle with the novel coronavirus. In late September, Monique Jones gave birth prematurely while on a ventilator with COVID-19. But now, nearly three months later, both mom and baby are doing well and celebrating the holidays together at home. And the new mom has since made sure the nurse who was by her side as she recovered will always be part of her little girl's life.

More Like This
Survey: Just 30% Of Parents Would Get Their Kids Vaccinated Against COVID-19 Right Away
The FDA Has Authorized The Pfizer Vaccine For Kids As Young As 12
When Can Babysitters Get The COVID-19 Vaccine?
America’s Birth Rate Keeps Dropping & Now It’s At A Record Low

Jones was 26 weeks pregnant when, in early September, she began experiencing COVID-19 symptoms, KMOV St. Louis reported. The 28-year-old tested positive for the virus and was hospitalized at Barnes-Jewish Hospital in St. Louis, where she was intubated a few days later.

"It was possible that I wouldn't — that's all I was thinking," Jones told Good Morning America about her thoughts after doctors informed her she would need to be placed on a ventilator. "They asked me if it was possible to take my baby out. At first, I told them 'no,' but I wasn't getting any better."

When Jones' blood pressure skyrocketed three weeks after she'd been intubated, threatening both her own life and the life of her child, doctors decided they could wait no longer and delivered her baby via C-section at 29 weeks gestation. At the time of birth, Jones' baby weighed just two pounds and had to be placed in the hospital's newborn intensive care unit (NICU), INSIDER reported. It would be days until Jones woke up from intubation and learned she'd given birth to a daughter, who she named Zamyrah.

Jones told Good Morning America that she woke up from intubation during the first week of October and was transferred to a rehabilitation facility shortly after, where she underwent physical, occupational, and speech therapy. And although Jones had left the hospital's intensive care unit (ICU), she remained on the mind of one of the nurses who cared for her. The ICU nurse, Caitlyn Obrock, made such an impact on Jones that the new mom told the news outlet she asked her to be her baby's godmother.

While Jones underwent physical therapy, Obrock raised $2,000 in baby gifts and organized a baby shower with her colleagues for the new mom. Obrock told Good Morning America she'd organized the shower as a means of lifting Jones' spirits. "The way she started out motherhood with this baby was unfair and we wanted her to know how special and loved she is," Obrock told the news outlet.

In December, just before Christmas, KMOV reported Zamyrah was released from the NICU and able to return home with Jones to celebrate the holidays with her dad and her 6-year-old sister. "I feel like I'm complete," Jones told KMOV in a recent interview. "I feel like I was fighting not for me, but for them."