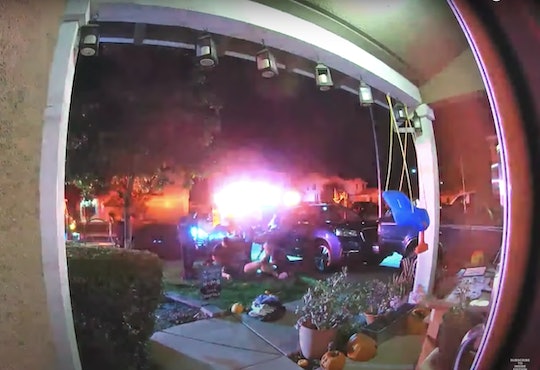 A California Mom Gave Birth On Her Front Lawn... & The Ring Camera Saw It All

“This is something we can use to embarrass him for the rest of his life.”

Today in “Oh dear God, no thank you, please,” mother of two Emily Johnson and her husband, Michael, are sharing a remarkable video from their Ring doorbell camera showing the mom giving birth on the front lawn. Thomas Alan Johnson, the pair’s second child, was born a healthy 7 pounds, 11 ounces, even if he did arrive a week early and far, far differently than anyone had anticipated.

“I definitely did not want to give birth on the lawn,” Emily laughed with KRON.

You know that story The Monkey’s Paw, where a family keeps making wishes on a mummified monkey paw and they all come true in the least fun ways possible? Well, this story is kind of like that. You see, Emily told KCRA 3, the local NBC affiliate outlet, that she was “really, really eager to be done” with her second pregnancy. “I was hoping he was going to come early, but we never really knew,” she recalled, trailing off.

When her contractions began approximately 10 minutes apart on Nov. 4, she said, she recalled her last delivery (of her son Blake) and figured she had “plenty of time” to get ready to go to the hospital, where she anticipated getting an epidural and otherwise following her birth plan. By about 9 p.m., two-and-a-half hours after labor began, things were moving along nicely and she was having contractions every five minutes.

But over the course of the next 20 minutes, things sped of precipitously, and she found she was contracting every minute. When her mother, Kristy Sparks, arrived to watch the couple’s older child, Emily and Michael went quickly out to the car. When she opened the door, Emily realized she wasn’t going to be able to make it to the hospital: Thomas was coming.

“I’m just going to get on the grass, and I’m going to be here,” she told KRCA 3. “This is going to be my spot.” She later told Inside Edition (in a good-humored way, we’ll note) that she felt like a cow giving birth in a field.

The family called emergency services, who arrived just as Sparks caught her grandchild (with the coaching of a helpful 911 dispatcher, GMA reports). Mother and child were whisked to the hospital where they were declared healthy and promptly cleaned of dirt and grass clippings by the nurses.

After some of the hullaballoo of Thomas’ dramatic debut calmed down, Michael realized that the entire saga had been captured on the family’s Ring doorbell camera. He shared the exciting footage with nurses at the hospital and then, later, with various media outlets.

“This is something that’s going to be around forever, and something we can use to embarrass him for the rest of his life,” he joked in an interview with Inside Edition.

“I’m just thankful I was facing that direction,” quipped Emily with KCRA 3, who can only be seen in profile in the footage. “Because otherwise I don’t think we’d be able to share the video footage with anybody!”

More Like This
Mom Gives Birth To Record-Breaking 16-Pound Baby
Parents Have Thoughts After Court Orders Nursing Mom To Use Bottle In Custody Dispute
6-Year-Old Boy Has Zero Regrets After Ordering $1,000 Worth Of Food On Grubhub
Florida Teachers With “Unvetted” Classroom Books Could Face Felony Charges
What Parents Are Talking About — Delivered Straight To Your Inbox