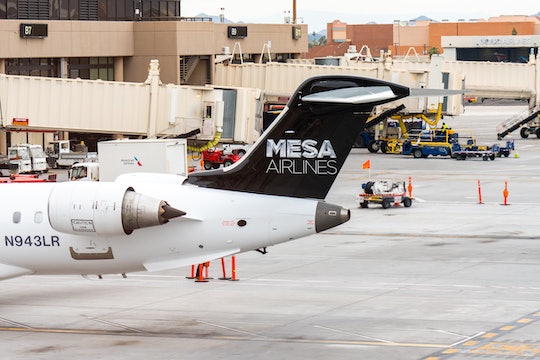 An altercation over the disposal of a dirty diaper has one airline passenger fuming.

Traveling with children can be chaotic in even the best of circumstances. But for one Seattle mom, a dirty diaper quickly turned a domestic flight with her young toddler into a nightmare. Dr. Farah Naz Khan claims a flight attendant not only humiliated her after she disposed of her child’s dirty diaper in an airplane bathroom’s trash receptacle but also threatened to place her on a “no-fly” list for creating a supposed “biohazard.”

Earlier this month, Khan traveled with her daughter, who is under 2 years of age, from Kalispell, Montana, to Houston, Texas, on a United Airlines flight operated by Mesa Airlines, one of United’s regional partners. But while the flight started off normal, Khan has said things took a turn for the worse mid-flight.

“I had to change baby’s poop diaper in the back bathroom and I disposed of it in a scented diaper disposal bag inside the bathroom trash,” Khan wrote when recounting the incident on Twitter. “When I came to the front, the flight attendant berated me for throwing away a poop diaper on the plane. He said it was a ‘biohazard’ and that I should retrieve it.”

Khan told NBC News she felt “humiliated” and “belittled” as she fished through the bathroom trash can for the diaper. Her anger grew, however, after she said she approached a separate crew member about obtaining an extra garbage bag to further secure the diaper in when back at her seat and was told that disposing of the diaper in the airplane bathroom was the proper procedure.

“When I confronted the initial flight attendant about this, he yelled at me again and said he didn’t want to deal with me,” Khan wrote on Twitter.

Khan alleged the flight attendant continued to harass her about the diaper even after the plane had landed and all passengers had deboarded. “Fast forward three hours and he’s calling me on my cell from a United Airlines 1-800 number and saying I’ve been placed on the no-fly list because of a biohazard incident,” Khan wrote. “He cursed out me and my family and said ‘You people bring your families everywhere. You should stop flying and just drive. I can hear your obnoxious baby in the background right now.’”

Khan, who identifies as a South Asian American Muslim, told KOMO News she had filed formal complaints with United Airlines and the Federal Aviation Administration and also notified police in Seattle, her hometown, and Houston, the city she was in when she received the call.

In a statement to Romper, a spokesperson for Mesa Airlines said they were reviewing the incident. “The details as described by our customer do not meet the high standards that Mesa sets for our flight attendants and we are reviewing the matter.”

While United’s spokesperson stressed that Mesa and United are “technically and legally” separate companies, they acknowledged Khan’s flight had been booked through them. “ This was a United Airlines customer,” they said. “She booked her ticket through United Airlines and expected the level of service that we aim to provide all of our customers, regardless of whether they’re flying on one of our regional partners or on one of our mainline flights.”