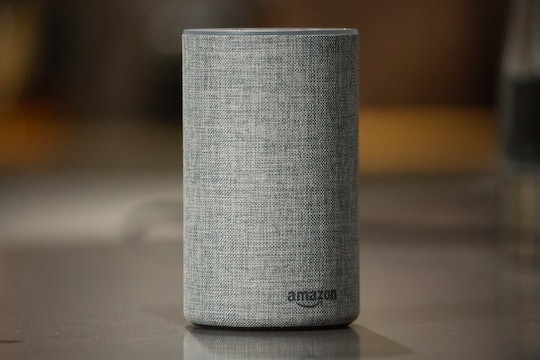 Amazon tells Romper it has already fixed the issue and is taking steps to keep similar instances from happening.

A concerned parent is raising alarm bells about Alexa, Amazon’s cloud-based virtual assistant voice service, after it suggested her child try a dangerous and potentially deadly activity. In a tweet shared over the weekend, Kristin Livdahl claimed her 10-year-old asked Alexa for a challenge they could do only to be told to touch a penny to the prongs of a plug half inserted into an electrical outlet — an action that can result in electric shock, fire, and other hazards.

“OMFG. My 10-year-old just asked Alexa on our Echo for a challenge and this is what she said,” Livdahl tweeted. “Here’s something I found on the web. According to ourcommunitynow.com: The challenge is simple: plug in a phone charger about halfway into a wall outlet, then touch a penny to the exposed prongs.”

Livdahl has said her child was looking for physical challenges to occupy them while trapped inside due to bad weather. “We were doing some physical challenges, like laying down and rolling over holding a shoe on your foot, from a Phy Ed teacher on YouTube earlier,” she tweeted. “She just wanted another one.”

Amazon tells Romper it has quickly corrected the issue behind Alexa’s answer and is working to prevent similar incidents from happening. “Customer trust is at the center of everything we do and Alexa is designed to provide accurate, relevant, and helpful information to customers,” an Amazon spokesperson tells Romper via email. “As soon as we became aware of this error, we quickly fixed it, and are taking steps to help prevent something similar from happening again.”

Livdahl and other Twitter users have since reported being unable to recreate the initial experience Livdahl had with Amazon’s virtual assistant. Instead, Alexa now reportedly responds with, “Sorry, I couldn’t find the answer to your question” when asked to “tell me a challenge to do.”

Of course, Alexa doesn’t have nefarious intent or a desire to see children injured. Rather the technology pulls answers from the internet. In this specific case, the device pulled its response from a website reporting on a dangerous challenge that was circulating social media in previous years.

Thankfully, Livdahl has said she was “right there” next to her child when Alexa prompted them to touch a half-inserted plug and used the incident as a teaching moment. “It was a good moment to go through internet safety and not trusting things you read without research and verification again,” Livdahl tweeted. “We thought the cesspool of YouTube was what we needed to worry about at this age — with limited internet and social media access — but not the only thing.”

“No attempt was made to try this,” she clarified.

Parents can attempt to protect their child’s experience with Alexa using Amazon’s Kids Settings (formerly called FreeTime). The settings can be enabled in the Alexa app and used to establish an explicit music filter, prevent children from ordering products, and set time limits on when children can interact with Alexa. It’s unclear, however, if such controls would have prevented Alexa from offering up such a dangerous challenge in Livdahl’s situation given how the technology operates — meaning it’s a good idea for parents to supervise when their child uses Alexa.