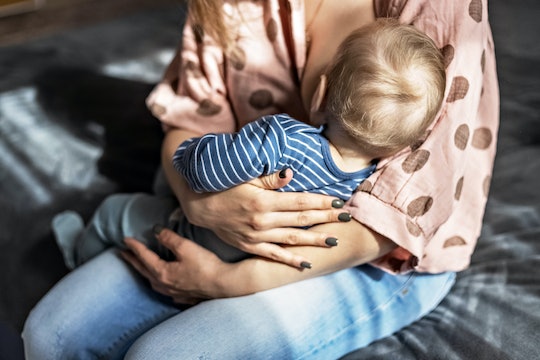 “She only wants her son to drink milk from the source.”

Breastfeeding is hard, especially if you’re waiting on your milk to come in, not getting any sleep, and taking care of a fussy, hungry baby at the same time. This is exactly what happened to one mom whose request has gone viral on Reddit. In the popular subreddit group, “Am I The A**hole,” the new mom’s sister-in-law shared that she’d offered to donate some of her own breast milk, but she had a different idea. The new mom insisted her sister-in-law breastfeed her baby instead.

In the viral Reddit post, u/Big-Analysis-4770 explained that she had a baby three months ago and has “a lot of extra breast milk.” She’s using the extra milk in her baby’s baths and freezing the rest. However, her sister-in-law hasn’t been so lucky.

“My SIL just had a baby,” she explained, “and her milk has yet to come in. The doctor told her that formula is just fine, but my nephew spits it up.” Her sister-in-law has tried different brands and types of formula, but her baby doesn’t take any of it. So, the Reddit poster offered some of her own breast milk stash.

“I offered to give her some of my milk, and she happily agreed seeing as neither one of us wants her baby to go hungry,” she wrote. But when she went to her sister-in-law’s house to drop off a few bags of milk, things got awkward.

“She denied them, saying she only wants her son to drink milk from the source,” wrote the mom. She added, “I’m not 100% comfortable breast feeding a baby that’s not mine.”

Because she was uncomfortable with her sister-in-law’s request, the Reddit user said she offered to bring her sister-in-law freshly pumped milk, but she still wasn’t happy. “She told me I was being selfish and how I’m not willing to help her.”

In the hours since this woman shared her story on Reddit, most readers decidedly agree that she was not the a**hole in this situation.

“Your boobs, your rules,” one commented. Another wrote, “Your offer to share your stockpile was more than generous. Her demanding that you serve as a wet nurse is insane, shockingly entitled, and wholly impractical.”

Reddit users also questioned the logistics of this request: “Even if you were willing, how would that work? The baby is only fed when you can go over? She brings him to your house for a 3 a.m. snack? You take your nephew until he's on solid food?”

Spitting up is normal in babies, according to the Mayo Clinic, and is often caused by overfeeding, not burping, and not keeping them in an upright position after feeding. It doesn’t necessarily mean that they are sensitive to formula. Additionally, adjusting to formula takes longer than just one feeding. For example, formula brand Enfamil suggests giving babies three to five days to adjust.

One Redditor suggested the new mom just needs more support at home because “she sounds very overwhelmed.” This person wrote, “It sounds to me like the sister isn't getting enough support at home with the baby and needs a really good nap while the kid's dad warms up some frozen breast milk and bottle feeds his kid.”

At the end of the day, no woman should be forced to do something with her body she doesn’t want to do, and that includes breastfeeding her nephew. “Nobody is entitled to anybody else’s breastmilk,” wrote one commenter. “Even your own baby is not entitled to your breastmilk. Every baby is entitled to be fed, yes. But not breastmilk, by a specific person. Women have the right to complete 100% bodily autonomy. If they don't want to breastfeed, for any reason, as well as no reason, that is completely their right. Just as it is their right to breastfeed, if they so desire.”