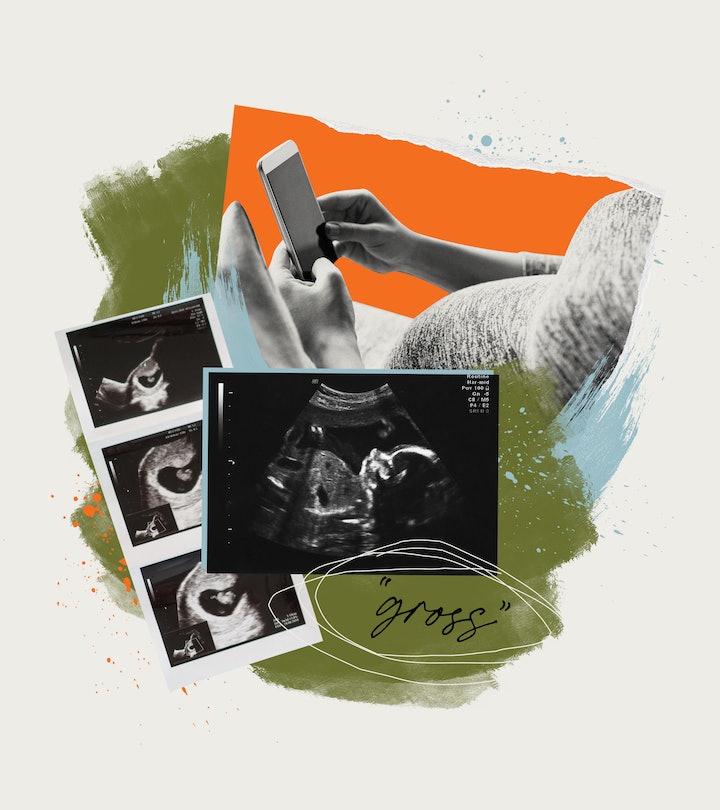 I'm Tired Of Apologizing For Sharing Pictures Of My Baby

I think all those self-deprecating captions were a way of saying “I’m still here!”

Back in my mid-20s, my friends and I often joked about our old classmates’ posts on social media, particularly the ones about marriage and kids. We projected our own fears onto them, of being left behind and mired in domesticity. Like many young, insecure people, we thought we were being witty and insightful. Really we were just being mean.

“They even post their ultrasound photos on Facebook,” I remember one friend saying. “It's gross. Like, I don't want to look at your internal organs. Keep that to yourself.”

I bet you can guess where this story goes next. A few years later, when I was 27 and pregnant, the ultrasound tech handed me my own flimsy little printed image of a 12-week scan. I'd been worried because I'd been spotting and cramping, but there was my baby's image on the screen, his flailing limbs and flickering heart. I hadn't told anyone about the pregnancy, beyond my immediate family — well, them and the friend I'd called from my bathroom, test in hand, crying so hard that she said, “I'm not sure if I should congratulate you or not” — but now seemed like the perfect time for the big announcement: I was almost in my second trimester, the scan had shown a healthy baby, and, of course, I had the picture. I imagined myself posting it to Facebook with a caption like “Coming to a crib near you next February!” Then I imagined my friend, and others like her, wrinkling their noses and muttering “gross” as they scrolled past.

I worried that I'd get sucked into the motherhood vortex and spit out as an unrecognizable version of myself, so changed that I wasn't even upset about changing.

In the end, I waited another two months and posted a photo of myself on a coffee shop patio with a discreet bump. I kept the caption self-deprecating and apologetic, which would turn out to be a pattern for me when it came to sharing baby-related stuff. After he was born, I'd post photos of my son sitting in his swing or smiling at a dog with captions like, “I'm sorry to clog your feed up with yet another picture!” or “This is the last one today, I swear!”

A few years later, when more of my friends started having kids, I noticed that many of them wrote similar captions. I started to wonder where this impulse came from — were we trying to head off imagined negative comments at the pass? Was it the baby equivalent of posting Instagram photos of your boyfriend with weird pejoratives (“managed to have a pretty nice night out with this jerk”)? Or was it something else?

During my pregnancy, I'd been excited about having a baby but ambivalent about motherhood. I'd watched so many Facebook acquaintances disappear slowly into married life. First their surnames vanished, replaced by their husbands' last names, and then their profile pictures became pictures of their kids. Eventually their posts achieved a sort of bland uniformity: breastfeeding commentary, mortgage complaints, what model of fridge to buy during the big reno. These women that I'd grown up with had been loud girls, fun girls, girls with a passion for art or theater or math. Now they seemed more like the harried moms we'd known as kids: tired, dull, one-dimensional.

I worried that I'd get sucked into the motherhood vortex and spit out as an unrecognizable version of myself, so changed that I wasn't even upset about changing. I swore that I was going to stay the same person when I became a mother. The first time my friends came over to visit the baby and I insisted on going out onto the fire escape with them while they smoked, just to prove… what? That I was still the kind of person who went out on fire escapes to watch other people smoke?

During their hour at my apartment, I tried not to talk about the baby, even though they wanted to know all about the baby. I kept changing the subject, asking them about work, events they’d been to, mutual friends they’d seen. I was a grownup version of the “not like other girls” trope: not like other moms. It didn't occur to me that many women, for many generations, had been trying not to be like other moms.

But, of course, motherhood changed me. How could it not? The early years of grunt work: feeding schedules, diaper changes, putting on and taking off snow suits, endless laundry. All the unsung hours you spend building a relationship with your baby, pacing and jiggling because they won't stop fussing, the slow joy of watching this brand new person unfold day by day. Even when I got time away from my son, my body remembered him; when a friend took me to a clothing-optional water circuit, I was horrified when my breasts started not just leaking but squirting in the sauna.

I posted photo after photo of my son, both because mothering him was all I had — and because I was lonely.

I became the mom who couldn't stop talking to my childless friends (which, at that point, was still all of my friends) about my baby and the endless minutiae of our days. There was nothing else; I was all-consumed. Ask me what happened in the world in early 2011 and I couldn't tell you because my world had shrunk down to the limits of my son's body. And since that body was my day-in, day-out everything, I posted photo after photo of it, both because it was all I had and because I was lonely. I wanted to share a moment of connection with my friends, whose parties I no longer attended, whose faces I barely saw except in miniature on my laptop.

In retrospect, I think all those self-deprecating captions were a way of saying “I’m still here!” I was in the vortex, but I was still me. Nearly a decade into this parenting gig, I still feel ambivalent about the trappings of motherhood, but I think that says less about motherhood itself than what I still need to unpack about it: what constitutes drudge work, for example, and the ways we devalue traditionally feminine arenas of labor and expression.

I also wish I could apologize to all the women I silently criticized for what I assumed was their own erasure. I know now that on the other side of their screens they probably felt much like I did, struggling to figure the balance between their new life, between motherhood and personhood. Who am I to judge?

And to everyone else: I'm not even a little bit sorry for all the photos of my kid that I posted, and I'd do it all again. Hopefully with better captions this time.