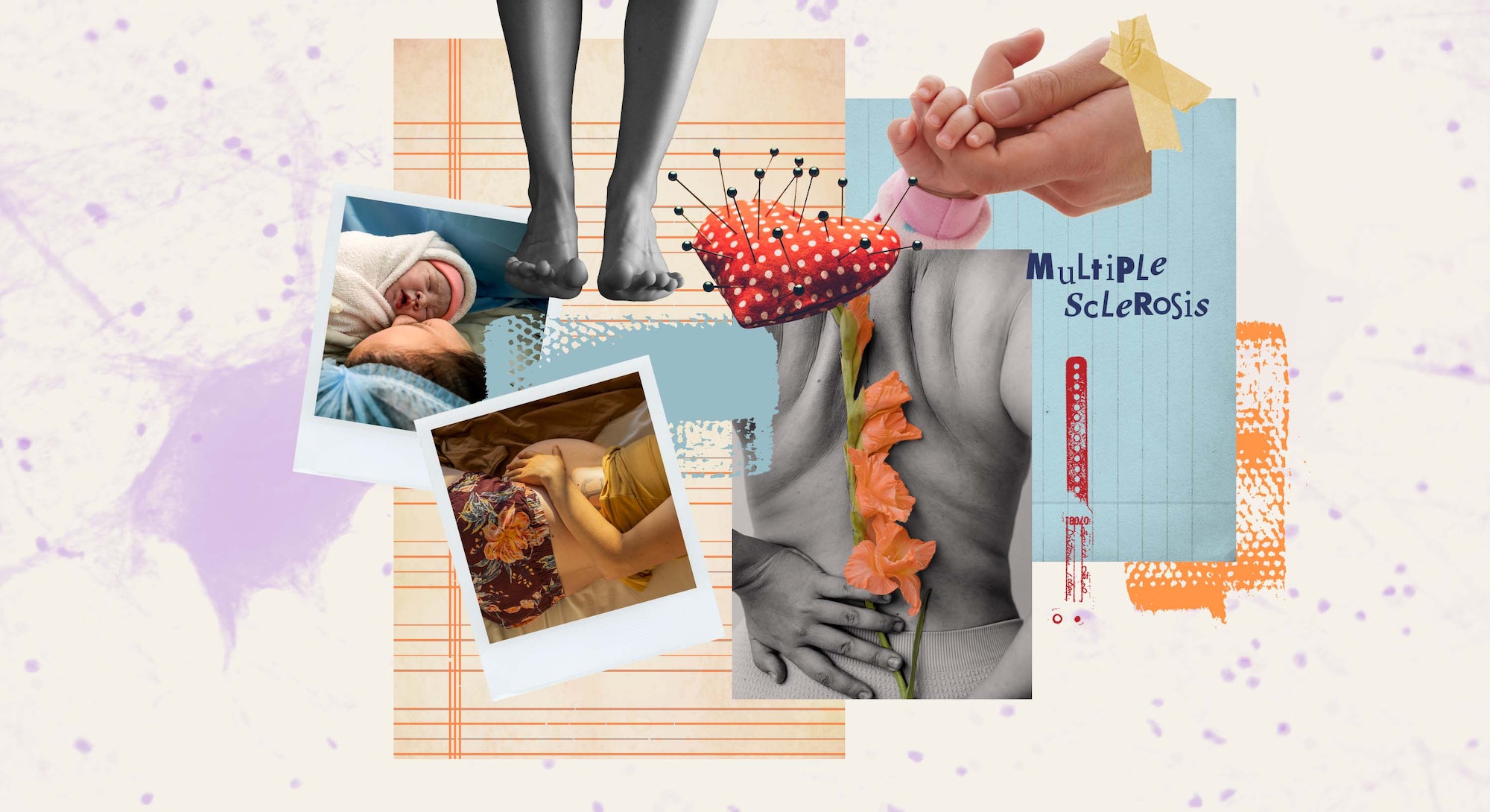 Freedom & Fear: How Multiple Sclerosis Taught Me To Mother

I worried MS meant I couldn't have children, but it made the mother I am.

When I was pregnant, my unborn daughter’s fingernails would scratch at my cervix. She scratched when I was at work, at dinner parties, when I’d pull into the Publix parking lot to throw up. It felt like she was trying to claw her way out. Like a lot of women, I hated being pregnant. I wanted her outside of me, safe. I wanted her born.

The day after I gave birth, I cut her scratchy fingernails. Everything else about her was soft. She was made of circles: round head, huge black eyes, ball of belly, oval thighs. She was a bunch of balloons, and looking at her I felt lighter, buoyed. But babies that are born late, as she was, a-week-that-felt-like-a-year late, come out with tiny talons, and she had long sharp nails at the edge of all her softness. I sang her Joni Mitchell as I cut them. Then, like Joni, I made my baby cry. I cut her pinky nail too short. It bled. I had spent the day with my pinky in her mouth, my finger her first pacifier, and now we reversed. I sucked on her bleeding pinky, both of us in tears.

Motherhood wasn’t a given for me; it was chosen. I didn’t want to be a mother until I thought I couldn’t. At 20 years old, I was diagnosed with multiple sclerosis, and my first question to the neurologist surprised us both: “Can I have kids?” I felt myself snatching at an experience I didn’t think I wanted until it was being pulled away from me. The doctor said yes, and my future became more fixed. I would have trouble walking, but I would have children.

I am a part of a generation of girls trained to look for magic.

Days after cutting my daughter’s nails, her fresh pink pinky skin turned pinker and my husband, who doesn’t worry, worried. I said, “It’s fine, look, she’s fine,” as she nursed quietly. He called the doctor; the doctor said, “It’s fine. I mean, as long as the pink is not spreading up her finger.” I looked and the pink from her nail was spreading up her finger. The doctor whisper-yelled, “Take her to the hospital.”

I thought the pink finger would be OK; I thought my daughter would be OK. It was a blood infection, but we were told she would be OK. After we left the hospital, we kept her antibiotics on ice in our bedroom, since leaving the room was hard. I was still bleeding, she was still crying, it was early baby days.

Days later, when we were both healing and her finger was the same pink all over, I whispered to my four-days-fresh daughter, “I’m so sorry.”

My first neurological symptoms were hard to describe, and rather than making me worry they made me feel magical. I’d be walking, and suddenly my legs would feel electrical, like they had been wrapped with Christmas lights. Later, after years of neurology appointments, I learned to describe the feeling as “pins and needles.” But in those first few months, it felt more mystical. I remember thinking, “I am just feeling it all; everything in me is alive and light.” Looking back, this optimism seems absurd until I remember how many times I saw Amélie in the movie theater. I cut my own bangs to look like her in my dorm room. I am a part of a generation of girls trained to look for magic.

But, after a few months, I started having trouble walking. One afternoon I couldn’t make it across an intersection, and I crouched into a ball, worried a car might not see me, worried about how I would get the final few feet across the street.

In the doctor’s office, I watched the neurologist poke my ankles with an open safety pin and I felt nothing. He looked at me and said he was canceling his next appointment to walk me across the street to admit me to the hospital. He said quietly, “Now, we need to go to the hospital now.” He gave me his cellphone so I could call my mom. The next day I would be diagnosed, and realize I wanted to be a mother.

I didn’t have symptoms when I was pregnant with my daughter. I felt everything — every hiccup and every scratch. In becoming a mother, I softened, and accepted what was inside of me.

Now, it’s five months after my daughter’s birth. Her pinky is long-healed, and she’s learned to laugh, but also, worryingly, she won’t stop vomiting. Everyone says it is fine. The doctor says it’s reflux; it’s normal. In the middle of the night, I tiptoe into her room and discover she’s sleeping in a crib of bile, vomit on the walls and curtains. Nighttime she is sick. Daytime she is sick. So much vomit. She is The Exorcist child. It is Hollywood awful. Unreal. I cry on the phone to the emergency nurse. My vomiting bobble-headed baby keeps losing weight.

The doctor asks for a video because babies spit up all the time. This isn’t a movie, I tell myself. Don’t be dramatic.

In the video is my shoulder, on it an unclasped nursing tank strap. A baby is crying, then retching, on repeat. The camera pulls back: I am holding a deflated baby. The image shakes. I whisper-cry, “You’re OK, baby. I know. I love you. I know. I’m so sorry.” The video’s over in 2 minutes.

The doctor calls. She didn’t like what she saw. She says, “Go right now. Go to the hospital now, now.”

It’s a rare condition, according to specialists. There is little research on it, but the research indicates the condition can be caused by antibiotics in the early baby days. The diagnosis doesn’t say that I’d cut my daughter’s fingernail too short, the notes do not mention I am responsible for this. My guilt fills the hospital room like smoke.

The specialist talks to us about the rare condition and how certain foods will cause my daughter to vomit until she goes into shock. The specialist cannot say what foods will cause this. She must eat to regain her lost weight, I am told, but any food might hospitalize her. I am quiet. I fold under myself in time into a different hospital room, where I ask my neurologist, “Can I have children?” I fold under myself in time and want to tell myself that motherhood isn’t only freedom, it is also, maybe mostly, fear.

At home, I try to take control via Excel. I color-code the foods she’s eaten and tolerated. I whisper-yell, “I don’t know!” when my husband asks about butternut squash.

I watch academic presentations about food protein-induced enterocolitis as I rock her to sleep. I stay awake taking notes, learning how to keep my baby alive. I eat as I watch. Because I am breastfeeding I’ve cut the most common trigger foods from my diet: oats, rice, dairy, soy. I am so hungry. I eat Hot Tamales and drink red wine at 1 a.m. I feel spicy with resentment and blurry with guilt.

As a mother, I snuggle, research, pay attention to tiny pinky fingers. My awareness of my own fragility, and of my daughter’s, invites me in to more feeling, rather than to more fear. I want to feel the electricity, the magic.

Multiple sclerosis is the body attacking itself, the immune system eating at its own nerves. Eventually, for most people, this means a loss of sensation; you begin to feel less and less. But during pregnancy, most people with M.S. stop having symptoms because the body’s immune system lets down its guard to not fight off the growing fetus. I didn’t have symptoms when I was pregnant with my daughter. I felt everything — every hiccup and every scratch. In becoming a mother, I softened, and accepted what was inside of me.

Over the next few years, my daughter grows, and her spreadsheet turns mostly green. Column C says, “Squash: safe, rice: safe, chicken: safe.” Looking back, I don’t know how I made it through this time, though I also hated the question, “How do you do it?” All parents of small kids are asked this at some point, and parents of ill children even more. I had, and have, no answer. I did it because that is what a mother does.

My daughter grew from a bunch of circles to towers of straight lines; she is all angles. She constantly does handstands and cartwheels. Her softness has moved to her edges and takes the form of blond curls. I often wonder if she’ll decide to have children. I want her to know that if she does, it will feel like both softness and scratch; it will make her more tender and more fierce.

With my multiple sclerosis, I don’t know what’s coming. Motherhood is much the same. I do my best to control what I can: I attend to my appointments, exercise, make spreadsheets. As a mother, I snuggle, research, pay attention to tiny pinky fingers. My awareness of my own fragility, and of my daughter’s, invites me in to more feeling, rather than to more fear. I want to feel the electricity, the magic. I want to, hope to, feel it all.