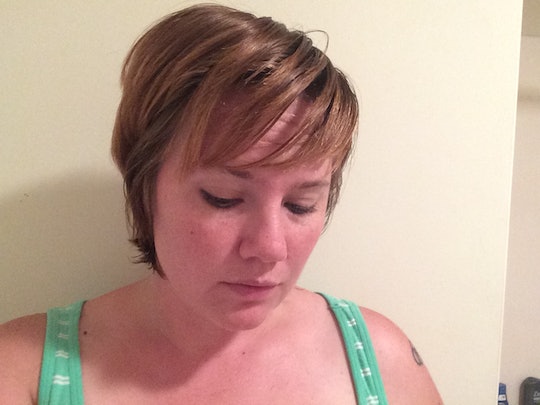 My cesarean section recovery was pretty much the worst. Out of all of the women I know who've had C-section deliveries, no one quite has a story like mine — and that’s not something I’m proud of or have been happy to brag about. Even my doctors had never seen a C-section incision healing process take shape like the one I’ve had.

First of all, my incision burst from infection two months after the surgery. Usually, if your C-section site is infected, the scar "coming open" because of infection will happen within the first couple of weeks postpartum, not months afterward like my own. But because the bacterial infection in my wound site either stayed dormant for two months or it was so deep within the incision that it took that long to surface, my doctor believes that's why mine opened up two months after giving birth to my daughter.

And before that, there were no signs of infection at all, and, in fact, healing seemed to be going perfectly in the initial weeks after I had my baby. I was even cleared at my six-week checkup for normal activity. But I’ll never forget that moment I sat down in my daughter’s pediatrician’s exam room for her two-month checkup, and I looked down to find the bottom of my shirt and my entire midsection soaked with blood and pus.

I hadn’t felt any pain or tenderness at the site until two days before that when I noticed some swelling and redness in the area. I'd made an appointment that day to see my doctor, but I took my daughter to her’s first, and then rushed to the ER from there.

The days immediately after that were pure hell. I was sent home from the ER after they drained the wound with instructions for hot Epsom salt compresses and rest — which like, sure, doc, I’ll rest really well with a 2-month-old at home — only to see my doctor two days later and have him to open the wound even more in order to get the remainder of drainage out. Then I had to pack the wound with gauze and change it out everyday for a month. Because I couldn’t see what I was doing since the location of the incision is just under my belly hang, I had to have my partner or another family member actually do the packing and changing for me. I didn’t want to imagine how deep the wound actually was, but clearly it wasn’t just a surface-level thing. The stinging pain of changing out the gauze everyday was such a hassle that I struggled not to feel defeated and angry.

He said "healing on its own" would likely take a month or so, but the problem was I had no idea that it had actually stopped healing altogether.

My activity level suffered, and though I was able to get out and do normal things after that first month — which was month three for my baby — I still had to be careful not to overdo it, which meant missing certain events and putting a major halt on resuming my everyday activities. It seemed to take forever for my incision to heal enough to stop packing it everyday, but my doctor had told me once that happens, I could just let it be and it would heal on its own.

He said "healing on its own" would likely take a month or so, but the problem was I had no idea that it had actually stopped healing altogether. I kept waiting for the site of the wound to appear smaller, but two more months, then another, and another went by, and I was starting to feel like something was wrong. It didn’t look infected, there was little fluid coming from it, but it was still clearly an open wound. It didn’t hurt, and it wasn’t tender to the touch, and I was getting around completely normally; I just wasn’t doing any major activity because of it. My patience finally wore thin, and I called to see my doctor again.

At that point, he was also stunned to see my infection hadn’t healed already. After taking a look, he referred me to the local wound-care center instead. Once the doctor there examined what was going on, he, too, had no concrete answers for me as to why it wasn’t already healed up. I was a young, healthy woman, and each doctor I saw was stumped. The doctor at the wound-care center told me that when it comes to wounds, this particular location is one of the worst for healing — the skin rubbing against skin, moisture, and warmth are all factors working against the healing process.

From there, he gave me a medical string of “rope” that contains silver, which works to draw the moisture out and fight against bacteria. He told me to cut a small piece off and lay it on the wound, topped with foam dressing, and tape. I was to keep the wound covered with these and switch it out every other day. Just like that, I did begin to see a significant change. My incision site slowly began to heal itself back together.

But it was still three-and-half months before the would finally close up. Having to deal with keeping it covered constantly except for in the shower honestly frustrated me. I was so bored of it being this thing that dictated so much of my life. If I wanted to sit in the tub and take a bath, I had to make sure a waterproof bandage was covering it. Same with going swimming or to the beach. And I know it’s made an impact on my emotional health during this first year of my daughter’s life. Her monthly milestones would pass, yet I was still dealing with the effect on my body from her birth months ago. In many ways, I was stuck. I couldn’t swim laps, which is my favorite way to exercise, as the wound-care doctor told me to be careful of any twists and turns, and public pools don’t exactly go well with open wounds.

Truthfully, I haven’t been able to really move past the trauma my body went through until my C-section incision completely healed.

It's been more than 10 months since I gave birth to my daughter, and to say that I'm relieved my incision site is finally healed is an understatement. The waiting process has something I tried not to think about too often, instead focusing on my daughter and the joy she brings to my life, but it was always in the back of mind torturing me. Truthfully, I haven’t been able to really move past the trauma my body went through until my C-section incision completely healed.

And even though I’ve had a beautiful personal journey in mothering my daughter in these months, I can finally begin the process of getting myself back after waiting nearly a year to be and do as I please.

This article was originally published on Sep. 16, 2016