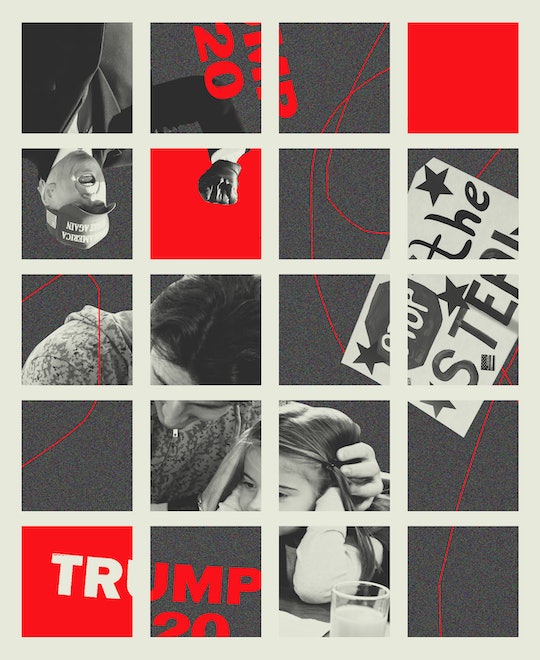 My MAGA Parents, My Children, And Me

If it weren’t for tongue-biting and subject changes, my sister and I would have to take turns distracting and shielding our kids from their grandparents.

Most weekends, if you were to stop by my parents’ house, you’d walk in and trip over the toys that are perpetually spilling out of their front room and you’d be greeted by the faint sounds of laughter from the backyard, where all five of their grandchildren are jumping around in an inflatable bouncy house. If you took a look around, you’d see trays of homemade rice krispie treats, party decorations hung for no apparent reason, and a table set up with all of the supplies needed to make an elaborate craft. You’d probably smile and think, “What lucky kids to have grandparents like this.”

What you may not notice, though, is all of the tongue biting happening among the adults, the abrupt, mid-conversation subject changes that have become second-nature, or the fractured relationships that are the direct result of Donald Trump’s mission to “Make America Great Again.”

If it weren’t for the tongue-biting and subject changes, my sister and I would have to take turns distracting and shielding our kids from their grandparents as they parroted the toxic, backwards, racist, and conspiracy-driven talking points the MAGA crowd has become known for. Then, it wouldn’t be long before we’d all have to retreat to our own corners, and my husband and I would have to drive home in silence, anticipating the inevitable and recurring conversation we’d have later where we’d have to ask, “How much longer can we let them talk like this in front of our kids?”

It’s infuriating and exhausting, and I’ve often been tempted to cut them off completely. But, these aren’t the angry protesters on TV, they’re my parents. The weight of it all feels crushing and it’s eroding my mental health. I have to keep approaching this situation as a mom first, ignoring the hurt I’m feeling as a child myself. I have to have difficult co-parenting conversations with my partner when all I really want to do is fall apart and cry to my husband. How am I supposed to cut my kids, and myself, off from such important people?

When my parents voted for Trump in 2016, I wasn’t exactly surprised. They had always voted red in the past — he was just the “R” on the ticket that year. After he took office, though, I watched as my parents evolved from apathetic voters into actual followers. As their love for Trump grew, their views shifted further to the right, and if anyone challenged them on his anti-feminist, racist, elitist, and downright obnoxious rhetoric, they’d insist it was “just locker room talk” or that, “He doesn’t actually mean those things, he’s just trying to get a rise out of people.”

Throughout the early days of Trump’s presidency, the strain grew between me and my husband and my parents, but never so much that we questioned our two daughters’ relationships with their grandparents. To us, they were totally separate worlds. After all, how much could my parents’ political views really affect a toddler and a preschooler?

By the time 2020 rolled around, my parents were full-on MAGA supporters, and the way they spoke started mirroring the President. When the pandemic rolled around, my husband and I painstakingly tried to find a way to explain the situation to our (then) 3-year-old without terrifying her. Meanwhile, my parents downplayed the situation and dismissed the exponentially growing number of deaths, and they came up just short of calling it all a hoax (though the word “conspiracy” was thrown around an awful lot).

It was during the height of the Black Lives Matter protests that my husband and I could no longer ignore that their MAGA views could, in fact, have an effect on our two little girls. As my parents insisted they were not racist, while simultaneously spouting off racist comments about the “riots” and “Antifa,” my husband and I focused on teaching ourselves and our daughters how to be allies.

Then, in August, when Biden named Kamala Harris as his running mate and we were excitedly explaining to our oldest daughter the significance of the decision, my dad shared conspiracy theories and insisted Harris slept her way to the nomination.

Thankfully, our daughters are still young enough that most of this goes over their heads. So, while I may sit there with stiff muscles, the girls are blissfully unaware. Still, my (now) four-year-old is observant and curious, and if she hasn’t picked up on some of their language already, it won’t be long before she does.

To an outsider, managing this situation might seem pretty straightforward. Implement a “No Politics Talk” rule at family gatherings, audibly call my parents out whenever they say something that’s out of line (especially in front of my daughters), and make it clear that their relationship with their grandkids is at risk if they can’t adapt. Honestly, that’s the exact advice I’d offer someone else in this position.

The problem is, this advice ignores the implications this decision could have on my kids and possibly my own relationship with them down the road. In a few years, I’d have to explain to them that I decided their relationship with their grandparents was worth less than my own discomfort. It doesn’t matter how good my intentions are, I’d be making an important decision on their behalf, and I’m not sure whether that’s fair to them or not.

My husband and I have come up with boundaries and drawn hypothetical lines to help us identify the point where we need to reassess things. These are all empty threats, though, because if it eventually comes to cutting off my or my kids' relationships with my parents, I don’t think I’d ever be able to actually do it.

Because, politics aside, my mom and dad are incredible parents and grandparents. They never forget to send my kids cards for every obscure holiday, they have every soccer game and dance recital blocked off in their calendars, and they rarely let one of my girls’ video calls go unanswered. It doesn’t matter what they’re doing, if I need them, they always show up to help. When I look back on my own childhood I have happy memories, and I model a lot of who I am as a parent today off who they were to me while I was growing up.

Instead of cutting ties and ending our relationship with my parents, my husband and I have a rough plan of action: We’ve agreed to speak up when we hear my parents say something inappropriate, regardless of how uncomfortable it might make us feel, and if they say it in front of our kids, we will explain to them on the spot why it was wrong.

There are good intentions behind all of the tongue biting and subject changes at our family gatherings, the roaring laughs when we’re all together are genuine, and when we greet each other with big hugs or say “I love you” when we part ways, we always mean it.

Despite everything that has happened, I still firmly believe that my kids are lucky to have the grandparents they do. Before long, my daughters will know enough to question and challenge their grandparents’ rhetoric, and when that day comes I will encourage them to do so. Until then, I’ll keep carrying the load and running interference so that, when we drive past the MAGA signs and pull into my parents’ driveway for a visit, all they feel is excitement, anticipation, and joy.

This essay is published under a pseudonym.