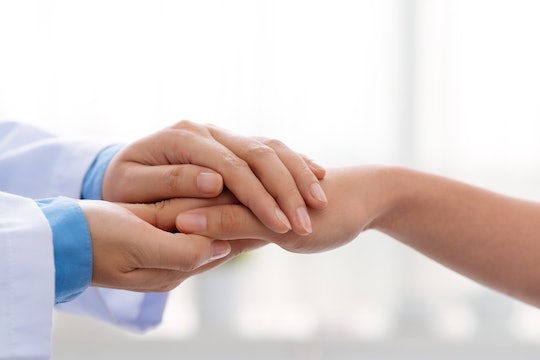 At a time when reproductive rights feel particularly under threat, politicians in New York have actually moved ahead to protect women's ability to access legal abortions. On Jan. 22, New York Gov. Andrew Cuomo signed the Reproductive Health Act into law, according to CBS News, updating the state's previous law that had been passed nearly 50 years ago, in order to decriminalize the medical procedure and allow for a number of important provisions, including one that will make it easier for women to access abortions after 24 weeks gestation. Unsurprisingly, the move has been highly controversial, but these myths about late-term abortions debunked by actual medical experts show that there's actually a lot more to consider than the tweets and memes currently circulating social media might have you believe.

The health care bill has been lauded by supporters as an important step forward to protect the rights of women to make their own medical decisions, as well as to better allow doctors to offer comprehensive care to their patients. That's because while the state's previous law did allow abortions past 24 weeks, they could only occur in the rare circumstance in which the woman's life was "at risk," according to The Syracuse Post-Standard.

Under the new law? According to the BBC, abortions past 24 weeks are permitted if continuing the pregnancy would "threaten a woman's health," reflecting the fact that there is far more to consider about a woman's well-being when making a choice about abortion, than simply whether or not her life in imminent danger.

Another important update offered by the Reproductive Health Act? Previously, pregnant people who learned that their babies would not be able to survive outside of the womb were able to have abortions — but only before 24 weeks.

Given that the reality of that restriction meant women would be left either traveling to another state for termination, or being left to carry a baby to term that would not survive, the Reproductive Health Act now allows women past 24 weeks to choose abortion in cases where their fetuses are not viable.

As with any discussion about amending laws surrounding abortion access, the New York law has been criticized roughly as much as it has been celebrated. But while a number of claims have inevitably begun to spread about the potential negative implications of the Reproductive Health Act, they don't actually appear to be supported by scientific evidence — nor do they seem to hold up against the actual reality of many medical practitioners who care for pregnant people.

Though the nature of the abortion debate obviously encourages a lot of discussion about morality and religion, for health care providers across the United States, the law has a far more practical implication, as it directly affects how they are able to do their jobs.

And as these health care experts have explained to Romper, it's really far past time they're put to rest.

Myth: There's No Need To Allow Abortions Past The First Trimester

While there are many people against the idea of allowing abortion at all, most tend to at least be more lenient about permitting first-trimester abortions compared to abortions in later stages of pregnancy. And it's not exactly hard to see why.

In the absence of details, some tend to assume a pregnancy that has progressed that far must involve a healthy, thriving fetus. And it's why, as President Donald Trump famously claimed during the final 2016 presidential debate, according to The Washington Post, some tend to think abortions later in pregnancy pretty much involve "[ripping] the baby out of the womb of the mother just prior to the birth."

Thankfully it didn't take long for Trump's claim to be swiftly condemned for its gross inaccuracy, but the basic idea still lingers: If a woman is going to terminate a pregnancy, she should at least do it before she reaches the second trimester.

The only problem? Fetal development doesn't really care about our arbitrary ideological timelines.

As the Reproductive Health Act reflects, health complications, including severe issues that would make it unlikely that the fetus would survive, or experience a meaningful quality of life, are most often the reasons behind these later abortions.

And while it would likely be easier for the mother as well if these unforeseen complications were identified in the first trimester, Dr. Katherine McHugh, an OB/GYN and abortion provider in Indianapolis, Indiana, tells Romper that the reality is that "sometimes these diseases don't develop or aren't diagnosed until later in pregnancy," meaning that women may not even realize there are any issues with their pregnancies until they've already passed the legal cutoff to access an abortion in their home states.

While the Reproductive Health Act would allow pregnant women in New York to consider termination, McHugh says that elsewhere, "patients have to travel out-of-state at their own expense and pay, out-of-pocket, for care at the same time they are facing the reality of losing a child." Others, however, have little choice but to carry their babies to term knowing they won't survive.

Myth: Anyone Will Simply Choose To Terminate Their Pregnancy At Any Point, For Any Reason

A common assumption about allowing abortion after 24 weeks in certain cases seems to be that it will inevitably open the door for women to suddenly decide to end their pregnancies whenever they feel like it, regardless of whether their baby could be born healthy.

But ask an actual abortion care provider, and they'll tell you that's just not the case.

For one, Emory University OB/GYN and family planning specialist Dr. Carrie Cwiak tells Romper that "abortions after 24 weeks are very rare," and that, more importantly, "if you're going to have an abortion past the second trimester [in the United States], there's going to be some compelling reason."

And when that conversation does occur? It's not going to simply be a quick decision made during a routine OB appointment.

Cwiak tells Romper that before a woman in her second or third trimester would be having a serious discussion about termination, there would be many other providers she'd consult with, including maternal fetal medicine specialists, and genetic counsellors.

The bottom line? According to Cwiak, she tells Romper:

It’s not just this clandestine situation where this woman against all odds just happens to find this abortion-loving doctor. Appropriately so, she’s interacting with so many different roles in the health care team, and that’s because this is mainstream health care.

Myth: Women Who Have Abortions Later In Pregnancy Would Have Otherwise Delivered Healthy Babies

At this point, it's hopefully clear that allowing abortion later in pregnancy isn't about accommodating parental ambivalence, or about mercilessly ending the lives of perfectly healthy fetuses — but instead about recognizing that situations can and do occur where delivery isn't going to be the safest or most appropriate option.

And while there may not be anything that doctors can do to change that reality, the Reproductive Health Act at least gives them the ability to provide comprehensive care to their patients that can include all the treatment options available to them.

In fact, what is so often missing from conversations about abortion is that it is very much a part of health care, and one that doctors need to be able to consider when determining a patient's options. As Dr. Sarp Askel, a resident OB/GYN at New York's Montefiore Medical Center, explained to Romper:

OB/GYNs and other women’s health care providers undergo years of training and education on the full spectrum of pregnancy care, including abortion care, in order to prepare for whatever situations might arise. This includes a thorough understanding of the risks and benefits accompanying every option. It is offensive to women and my colleagues to assume decisions surrounding pregnancy termination beyond 24 weeks are made flippantly and without deliberation.

As a doula and childbirth educator who has supported families who have had abortions due to serious fetal abnormalities, Deena Blumenfeld certainly agrees with that assessment.

"Late-term abortion is never a light, flip decision," she tells Romper. "Most of these pregnancies are planned or wanted. The decision parents face is death now or death in a few more weeks."

She added, "Do they drag out their mourning period and pregnancies longer or do they end their suffering earlier? These are not easy questions, and I hope no parent ever has to be faced with them."

Given that the Reproductive Health Act emphasizes both the viability of the fetus and the health of the mother, some abortion critics have suggested that, if the issue is truly that the mother's health is at risk, the answer should still be to deliver her, not to terminate her pregnancy. On the surface, that sounds like a reasonable conclusion, but how accurate is it really?

According to Dr. Askel, making a decision about a woman's health in pregnancy is always going to depend on a number of different factors, and in some cases, induction of labor, or delivery by C-section, might indeed be the safest options.

But as Dr. Askel noted, in some cases "neither induction of labor nor C-section is safe," and what's more is that "in many cases, the medical problem that leads a woman to consider pregnancy termination could make a Cesarean delivery even riskier."

In fact, the risks involved with C-sections in general are a major reason why it seems unfair to suggest all women facing complications should simply be delivered regardless.

As Dr. McHugh explained, "C-sections have significant potential consequences, both during the procedure (like bleeding, injury to the bowel or bladder, even need for hysterectomy) as well as after and for future pregnancies."

And when the outcome of that C-section *isn't* a living baby you get to take home? Women will have essentially endured major abdominal surgery, when they could have instead opted for a much less risky D&E procedure, with the same outcome.

Myth: Abortions Are Dangerous & Should Be Heavily Regulated & Restricted

Given that abortion is so often a topic discussed in terms of personal beliefs, and black-and-white ideals about what is "right" and "wrong," it's not exactly surprising that people want them regulated by law. But the message from actual abortion care providers seems quite clear: abortion is health care, and should be treated as such.

As infuriating as it to think that women are being denied legitimate medical options due to political or ideological reasons though, it's even worse to consider that the laws aren't keeping women safe, they're actually putting them at risk.

Dr. Cwiak tells Romper that, not only is abortion "an incredibly safe procedure," the average woman actually has a 10 times higher rate of dying from full-term delivery," even without additional delivery complications. And yet, there are still politicians arguing for laws to make it more difficult for them to access — and leaving them instead with options that may put them in more danger.

If you've never been in a position where abortion has been a legitimate consideration, then it can be incredibly easy to make assumptions about what other people should do and how they feel. In many cases, we seem to assume that women who choose abortion have somehow been selfish or irresponsible, and that women, by and large, are not actually capable of making responsible choices about their own bodies.

But what health care providers actually know is that women deserve to be trusted to make the decision that is best for themselves and for their families, and it's why it's important that doctors and medical care providers are legally able to give them *all* of the options available, based on what's truly most appropriate for their specific situation.