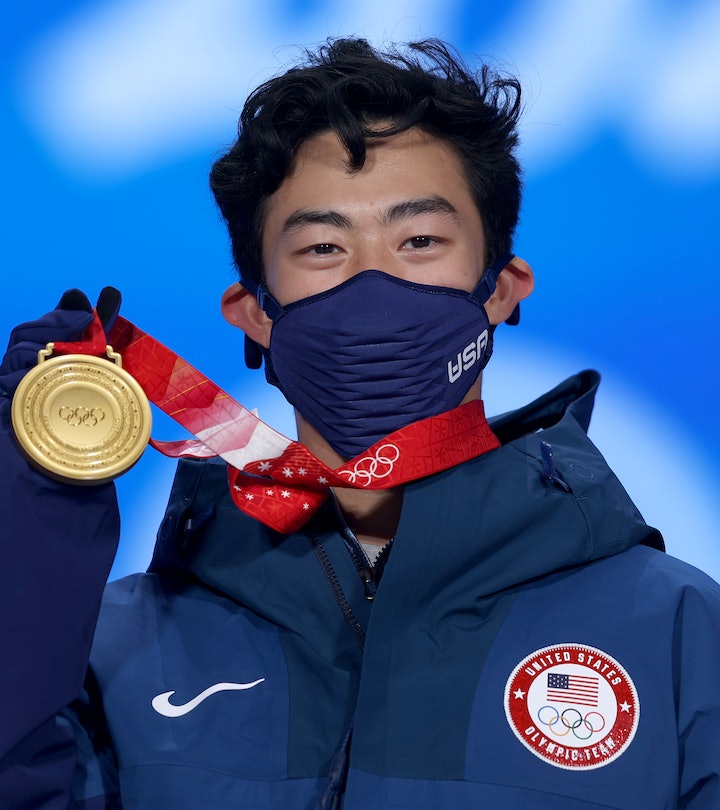 Nathan Chen has returned to the United States after representing the country at the Beijing Winter Olympics, where he earned a gold medal for men’s singles in figure skating and a silver for the U.S. figure skating team. We’ve always wondered where you put an Olympic medal after the moving public ceremony. On a bedroom wall? Over a mantle? Nathan Chen put his gold medal on his mom’s neck and, honestly, we can’t think of anywhere better (or sweeter!) than that! And the story of how it got there is pretty adorable, too.

Fresh off the plane from Beijing, the figure skating phenom made an appearance on the Today Show, where he talked about his Olympic experience and next steps, including returning to Yale and skating with fellow Team USA skaters for the touring show Stars on Ice. But the hosts also wanted to make sure their guest was well fed. “I heard you were hungry, maybe pizza was on your mind ... so we ordered some for you,” said Savannah Guthrie coyly. “Maybe we can bring it out.”

Out comes a New York pizza wheeled in by none other than Hetty Wang, Chen’s mother, who he had not seen in over a month. (Foreign spectators, including families, were not permitted at the Games.)

After embracing and allowing Wang time to take a seat, Chen immediately removed his medal to put it around her neck — though she appears to have attempted to demure it at first. It’s a fitting tribute to her role in her son’s success, which Chen has often mentioned on social media.

“There’s no way I would be able to make it to where I am today without her support,” Chen told the Today gang. “She made [skating] fun for me, made it a sport I loved. And I think that’s not always easy for a 3-year-old with a short attention span!”

While Wang said she was nervous while watching her son compete in Beijing, there was a comfort in the fact that, after hours and hours of watching him practice his routine, she can “basically know what he’s going to do most of the time.” “Still,” she said, “anything can happen.”

But, she also said she could tell when he’s nervous, and she noted that he was “very calm,” before and during his routines.

When Al Roker asked Wang to reflect on what it was like to wear her son’s medal, she replied, holding it up, “Everything’s in here: it’s teamwork, that’s why it’s so heavy, because of everyone’s time, effort, and support.”

And, certainly, not least of all hers.