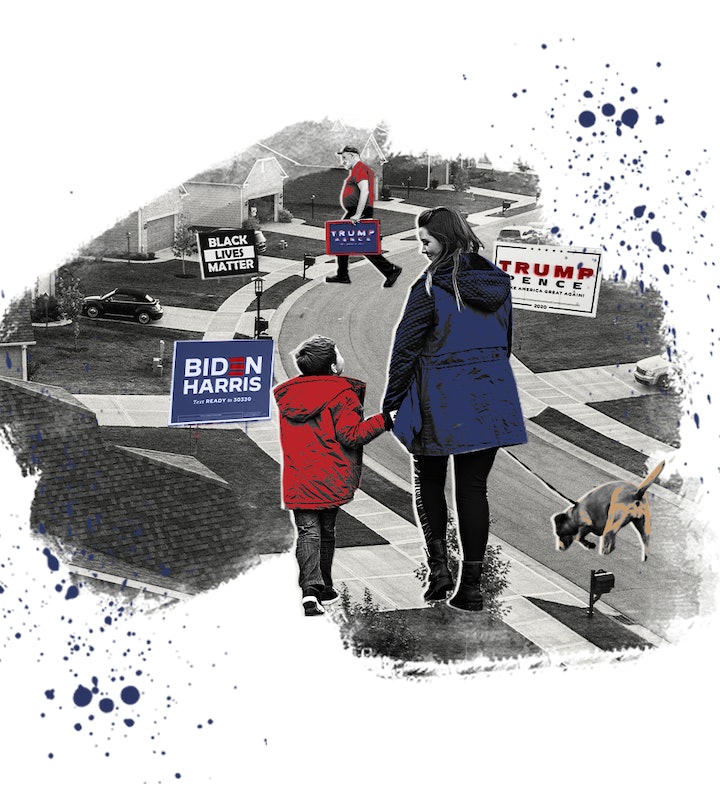 Can Neighbors Learn To Talk To Each Other Again After The Election?

Adults are experiencing a communication breakdown. Our children are watching.

On a beautiful day earlier this fall, I went out for a morning constitutional with my six-year-old son and our dog. It’s a half-mile loop around our block and Coco, an 80-pound Saint Berdoodle, was particularly ebullient, oak leaves and pine needles crunching beneath her paws as she ran around me barking. She may look huge, but she’s technically still a puppy with tons of BDE — big dog energy — and, admittedly, I am no Cesar Millan.

As we rounded the bend, her leash tethered to my waist like a belt, Coco and our neighbors’ dog began barking at each other, at which point the owner — a white man in his early 50s — emerged from his house, walked over to where we were standing and began barking at me.

Perhaps foolishly, I had envisioned the suburb where we’re currently living, a beachy town in Eastern Long Island, as an idyllic world of close-knit neighborliness, different from New York City, where people give each other space – mental, if not physical – and don’t ask too many questions. We’re all at our wit’s end following months of living in fear, yet out here I thought things would be different. We’d embrace suburban life, get to know people and address each other with an underlying acknowledgement of our shared predicament, a modern-day Mister Rogers Neighborhood.

But, in 2020, it was not to be. In the final weeks before the election, Joe Biden was likened to Mister Rogers by a Trump campaign adviser, and the comparison was intended as an insult. We are in a dark place.

“You better get that dog to shut the hell up,” my neighbor shouted, arms crossed. We’d never really spoken other than to say hello when he was outside washing his convertible. His wife and I have made small talk in the street when we’ve passed each other while jogging. I knew her name, but not his.

Maybe my neighbor interpreted my smile, intended to reassure my son that everything was under control, as a signal that I thought he was kidding. “I’m serious,” he said, stepping closer to me. The funny thing was that I agreed with him — the substance, if not the style, at least. My dog was being loud and annoying.

In the final weeks before the election, Joe Biden was likened to Mister Rogers by a Trump campaign adviser, and the comparison was intended as an insult. We are in a dark place.

Coco stopped barking and ambled over to my neighbor, who seemed to be reaching down to pet her. I was momentarily relieved, as if the situation had been defused. Instead, my neighbor grabbed Coco’s face in one hand and smacked her across the muzzle with his other. He then bent his head down to hers and started shouting, saying we’re in the middle of a goddamn quarantine and she better learn to shut up, as if a dog could understand what any of that meant. He then told me never to walk in front of his house with my dog again.

My neighbor doesn’t have a sign outside his house indicating a political affiliation, but standing there in the middle of the street, all I could I think was “Trump supporter,” even though I have no idea if that’s the case. The denouement of the chaotic Trump years has now endowed every neighborly interaction with an uncomfortable political edge. Because one thing I do know for sure is that Trump’s ugly rhetoric has seeped so far into our public discourse that it’s transformed the way we relate, and the way we interpret other people’s behavior.

We’re transients out here in suburbia, part of the wave of city dwellers who were lucky enough to have the option to ride out the pandemic in a house with a yard – in our case, my parents’ place. It happens to be located in a conservative district that went to Trump in 2016, 54 percent to 42 percent; this year, the Republican Congressional incumbent is leading the district by 23 points. Judging by the signs on people’s lawns, our block is approximately 50 percent red and 50 percent blue, though the Biden-Harris signs mysteriously disappeared twice in the middle of the night, so maybe I am undercounting. Everytime I talk to someone new, I wonder what side they’re on, and I can tell they are sizing me up as well. There’s a breeze of uncertainty swirling through the air, a mistrust that’s invisible but palpable.

“Come on,” I said to my son, grabbing his hand. We continued our walk as I took deep breaths. I was shaking, angry but also wrestling with feelings of being somehow culpable, as is always my first instinct when things go wrong.

Of course, unpleasant interactions existed before Donald Trump took office, and they will continue long after he’s gone. But now they seem to happen more frequently and feel heavy with meaning, proof that there has been an irreconcilable schism in our society. Our attitudes over the past four years have been reinforced and amplified by social media platforms, which have monetized our outrage in that great hat-trick of capitalism. We’ve gotten so used to fighting on the Internet that it’s almost like all the indignation has spilled over into real life.

As we continued our walk, I composed–in the grand tradition of women everywhere–a speech in my head intended for my neighbor. But the moment had passed; I blew it and now it was too late for oratory. Instead, I attempted to harness my delayed-reaction anger into a teachable moment. As my son and I walked home, we talked about styles of communication. I told him that what just happened on the street was not appropriate, that this is not the way we talk to our neighbors. It was wrong that our neighbor hit Coco. “Does this mean we can’t trick-or-treat at that guy’s house?” he asked. Probably not, I told him.

When we got home, I told my husband what happened.

“That’s assault,” he said. I hadn’t even considered that possibility.

I called the police for the first time in my life that day, feeling slightly like a “Karen,” but also knowing that what my neighbor did was unacceptable. The officer arrived about 30 minutes later and rubbed Coco’s belly as I told him the story of what had just transpired. He took some notes, then drove over to my neighbor’s house and knocked on his door, an armed interlocutor, there to adjudicate a dispute between two dog lovers in the middle of a deadly pandemic. It was ridiculous but, if I’m being totally honest, also a bit thrilling. I watched the two men talk from my own doorway, heart racing. Ten minutes later, the officer drove back to my house to give me an update. “He said that Coco jumped on him and he was just shooing her out of the way,” the officer said. “He’s lying,” I said. The officer shrugged.

I don’t know what I thought was going to happen. An arrest? An FBI raid? Would Coco be forced into witness protection? The whole episode was anticlimactic. The officer said that I should call anytime if I run into any further issues; he’d keep my complaint on file. I thanked him and he drove away.

It’s been a few weeks and things have remained awkward with this neighbor of mine as we’ve reached an uneasy detente. When I see his wife jogging around the block, instead of waving and making small talk, she runs in the other direction. As for her husband, he continues to wash his car in the driveway, but we no longer acknowledge each other’s existence. I walk past their house as quickly as possible, praying that Coco keeps her mouth shut. She’s getting better, owing to my increased focus on training. I suppose I can thank my neighbor for inspiring me in that regard.

We don’t need to have empathy for those whose beliefs we find abhorrent, but we need to keep from transforming into our ugliest selves.

Now that we know who won this election (Mister Rogers, not the bully), we are going to need to somehow find our way back to a place of neighborly respect for the sake of social cohesion. I feel acutely the need to find our way back to each other. That’s not to say everyone is good underneath it all, and that we should just forgive and forget toxic behavior. We don’t need to have empathy for those whose beliefs we find abhorrent, but we need to keep from transforming into our ugliest selves.

As Joe Biden said in his victory speech, “It's time to put away the harsh rhetoric, lower the temperature, see each other again, listen to each other again. And to make progress we have to stop treating our opponents as enemies."

I’ll be honest – I’m not exactly sure how we get there. This month isn’t off to an auspicious start, politically. For inspiration, maybe we should look to our children. In late October, I watched my son playing outside with a couple of kids who live down the street. Their babysitter, a teenage girl, offered to walk him home. She held his hand as they strolled up our driveway, and after she left, I saw her enter her own house.

The girl was my neighbor’s daughter. I had called the police on her father, and despite knowing this, she was still kind to me and my son. The following day, as we walked past her house with Coco, our dogs sniffed each other but didn’t bark. I told my son that it’s going to be OK, that he could trick-or-treat there after all.