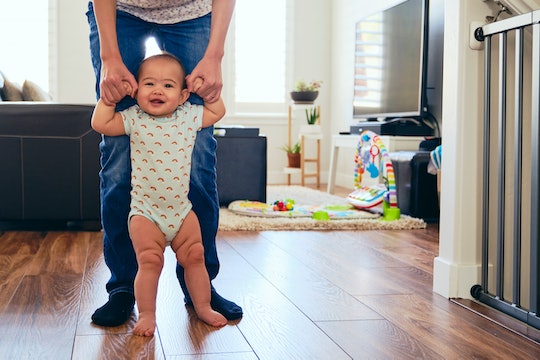 Eligible parents can expect the first of up to six monthly Child Tax Credit payments to hit their bank accounts soon.

Millions of families will begin receiving monthly Child Tax Credit payments today, July 15, thanks to the temporary expansion of a long-standing antipoverty program geared at helping ease the high cost of raising a child amid the coronavirus pandemic. The funds come as part of President Joe Biden’s $1.9 trillion stimulus bill, which, among other things, temporarily expanded the current Child Tax Credit rule. Under the new rule, eligible parents will receive up to $3,600 per child under 6 years old — or monthly payments up to $300 per child for six months.

What Is The Child Tax Credit?

Enacted in 1997 to help families offset the high costs of raising children, the Child Tax Credit is, along with the Earned Income Tax Credit, considered to be one of the nation's largest anti-poverty programs. Following its expansion in 2001, the Child Tax Credit enabled parents to claim a tax credit of up to $2,000 per child under the age of 17. Additionally, dependent children aged 17 to 18 and full-time college students aged 19 to 24 can claim a nonrefundable $500 credit. Should the claimed credit exceed the taxes a parent owes, they can receive a refund of up to $1,400 per child 17 or younger.

How Much Will Families Receive & When Will The Money Arrive?

The IRS and the U.S. Treasury distributed payments for nearly 60 million children on July 15, according to CBS News. A majority of those payments — nine out of 10, to be exact — were sent via direct deposit, but may take a few days to show up in families’ bank accounts due to bank processing times, the news outlet reported. Families who haven’t provided the government with their bank account information will receive their payments via a mailed check or a prepaid debit card.

The expanded Child Tax Credit is also fully refundable under Biden’s stimulus package, meaning families who opt for monthly payments can claim the remaining six payments on their 2021 tax return. Parents can calculate how much they might receive using Kiplinger’s Child Tax Credit calculator.

To be eligible for the full amount of the expanded Child Tax Credit, single parents must not have earned more than $75,000 in 2020. For married couples filing jointly, the income threshold is $150,000, according to The Post.

Individuals with incomes higher than $75,000 but below $200,000 would still be able to claim the traditional Child Tax Credit of $2,000 per child, according to Kiplinger. Additionally, joint filers with an annual income of between $150,000 and $400,000 would also claim the unexpanded credit.

When Will Future Monthly Payments Drop?

According to CBS News, the IRS has already determined its schedule for sending monthly Child Tax Credit payments to parents and caregivers. Families can expect the next payment to be sent on August 13, followed by one on September 15, and then another on October 15. The final two payments of the year will be sent on November 15 and December 15.

Can You Track Your Payments?

What Does The Expanded Benefit Mean For Children?

Could The Bigger Benefit Become Permanent?

Although Biden’s stimulus package only expands the Child Tax Credit for one year, some legislators have called for making the increase in benefits permanent. According to CNN, Reps. Rosa DeLauro, Suzan DelBene, and Ritchie Torres have introduced a standalone bill that would permanently raise the Child Tax Credit to $3,000 per child. They hope to capitalize on the recent support for Biden’s temporary expansion to cement a more permanent boost to the benefit.

"We cannot stop here. We must use this moment to pass the American Family Act and permanently expand and improve the child tax credit," DeLauro told CNN. "One year is not enough for the children and families battling not just the coronavirus, but poverty, too."

This article was originally published on Feb. 9, 2021