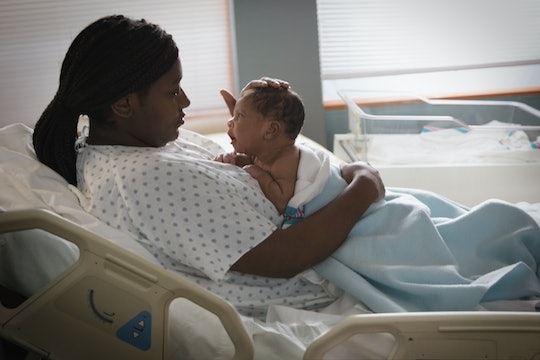 The Garden State is hoping to become a model for maternal care while also attempting to combat the state’s high maternal mortality rate, which disproportionately impacts the state’s Black residents. New Jersey’s governor signed a bill into law Thursday which establishes a universal newborn home visitation program. Under the program, new parents throughout the state will have access to home visits conducted by registered nurses within two weeks of a child’s birth or adoption regardless of their income or economic status.

“Home visiting programs have tremendous benefits for mothers, infants, and families,” Gov. Philip Murphy said in a statement released by his office Thursday. “Research has shown that these programs not only decrease infant and maternal mortality, but also improve mental health, increase child educational attainment, decrease abuse and neglect, and strengthen family success and economic growth.”

Murphy has described New Jersey’s new universal newborn home visitation program as “a critical step” toward making the state “stronger and fairer for all families” by providing new parents with vital tools and support.

Data released by the U.S. Centers for Disease Control and Prevention placed New Jersey’s maternal mortality rate at 26.7 deaths per 100,000 live births. That’s higher than the national average, which in 2018 was reported to be 17.4. What’s more, New Jersey’s rate was also higher than rates recorded in the vast majority of other states.

But there are very clear racial disparities present in New Jersey’s maternal mortality rate. In fact, Black women in the state are seven times more likely to die from pregnancy-related complications than their white counterparts, according to a January report from Nurture New Jersey, a statewide awareness campaign launched by the state’s first lady.

“As we work to combat New Jersey’s Black maternal and infant health crisis through Nurture NJ, we know that those first weeks post-partum are absolutely critical in determining maternal and infant health outcomes,” New Jersey First Lady Tammy Murphy said in a statement. “Through this universal home visiting program, we are making clear to all New Jersey families that their health, wellness, and development are our highest priority, beginning with birth.”

According to The New York Times, the program is voluntary and provides all parents, including those who experience a stillbirth or are adoptive or resource parents, with the ability to have a registered nurse visit their home to conduct a wellness check at no cost to them. There are no income or insurance requirements to participate in the program.

“Being a new mother can be a challenging experience for women as they recover from childbirth and deal with many changes in their lives,” New Jersey Assemblymembers Shanique Speight, Valerie Vainieri Huttle, and John Armato, three of the bill’s primary sponsors, said in a joint statement. “It is not uncommon for mothers or their infants to experience physical or mental health issues in the weeks and months following their child’s birth, which is why follow-up appointments with healthcare providers are so important. Enacting a statewide home nurse visitation program would ensure New Jersey mothers receive invaluable postpartum care and advice during this critical period of time, which would ultimately help ensure the health and well-being of families throughout our state.”

While Oregon currently has a similar universal at-home newborn nurse visitation program in place, New Jersey’s is expected to be the first to schedule the visit for within two weeks after birth.