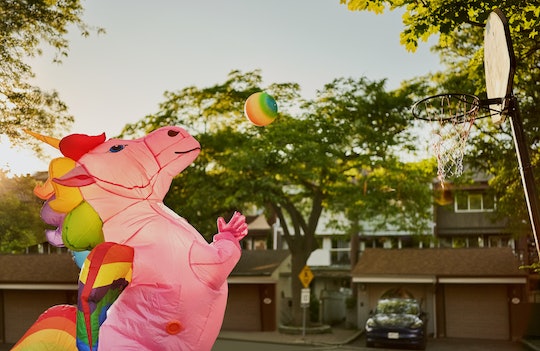 Lucky for us, we have a prolific source of random shit. We have kids.

It began on a weekday in October, at my sons’ elementary school. Just as I was walking down the hill to the pickup area, I spotted them: two unicorns, lumbering on their hind legs, maybe eight feet tall. They were the same pink as the late-afternoon sky over the boulevard that ran behind the building.

Well, no, I didn't say it. “Said” implies a certain sense of nonchalance. I shrieked the word unicorns. When I checked Lucy's face, she was looking at me like I was a little too excited. She's 3. I'm 38.

This should have told me something was off. But I was busy — busy hurrying us both down the hill, jockeying for a spot in the crowd that was forming around the mythic beasts. They turned out to be two moms from the school in giant inflatable costumes, handing out candy to kids with their front hooves. “Lucy, get in for a picture!” I said, prodding her forward. “She's so excited.”

Lucy accepted a lollipop. “Say unicorns!” I cried. Leave me out of whatever this is, her eyes said back.

The rest of the day, I couldn't stop talking about it. My sons (they’re 6 and 8) were like: “We know. We were there.” My husband said, “That’s great. You seem like you really got a lot out of it.”

“Yeah,” I said. Then I looked at him and realized he seemed kind of concerned. “I don't know,” I said. “It's just kind of like: I just wasn’t expecting it, and it just, sometimes it feels like nothing's ever new...” I trailed off.

“At pickup?” he offered.

And that’s what I was going to say: at pickup. But then I realized, in the middle of my sentence, that my sentence was complete.

Sports are back. Art’s getting made. No one is having a virtual Christmas. So why do things still feel so eerily monotonous?

I expected nothing to feel new when my kids were babies. The way early motherhood turns time into a blob is a unifying human experience. (I can just imagine one cave mom scratching out hieroglyphics to the other: Did you know it’s Tuesday? The other carving back: GTFO.) When my kids were toddlers, I once again prepared for nothing to feel new for a while, it was the pandemic. Overnight, 99% of all potential for spontaneity was gone.

But now my kids are kids. All three of them are out of the baby phase — which means, after eight years of it, I am, too. We’ve all agreed the pandemic is some shaky version of over. I leave the house now. I’m sleeping the most I have in nearly a decade. I almost never wear a mask. Sports are back. Art’s getting made. No one is having a virtual Christmas. So why do things still feel so eerily monotonous?

After what I think of as my unicorn revelation, it was like I’d spoken magic words that revealed the peeling-paint vibes of — well, everything. I mean, take the news. New is right there in the name, and yet — what’s so new, exactly? Kanye West is being viciously offensive. Egomaniac dudes are running giant companies into the ground. Gas is less expensive than yesterday, but still very? Okay. We’re on the edge of nuclear war. We’re on the edge of climate disaster. We’re on the edge of a recession, and on that one, I have to say: Wasn’t the Great Recession only like, 12 years ago? They really shouldn’t call something Great if you’re gonna have to do it every 12 years.

Oh well, at least a presidential race is coming in 2024. Who’ve we got — some fresh faces, I hope. What?

Here’s my first theory. This pandemic aftermath has robbed us of a key feature of motherhood: It’s supposed to get easier, at a fixed and necessary pace. Maybe not in the macro sense — little kids, little problems, and all that — but in terms of how your day-to-day evolves. Those of us coming out of the baby-toddler tunnel right now went in with an idea of what the light at its end would look like. It was supposed to be that, when you returned to work, you put on your uniform or suit or scrubs and left the house. For better or for worse, you would spend time in the solitude of a commute, talk to other adults, and eat lunch seated, without being touched. While you were doing all this, your big kids would be at school, and you could expect they’d stay there, even if someone saw their nose run. With your small kids, you were supposed to be able to count on a simple arrangement: You would give the daycare so much of your money it felt illegal. The daycare, in turn, would be open.

The point is, things aren’t tremendously easier on us moms, at a point when our bodies and psyches and bank accounts need them to be. And when things are hard, hour-to-hour, in the same way they’ve been for a long time, it makes sense that nothing feels new.

But it’s not just us, in our tunnel-worlds. The real world is stuck in stasis, too.

I felt myself coming down with a slightly different strain of the nothing-news watching two other buzzy things, recently: the Netflix movie Luckiest Girl Alive, which is set in 2015, and the Hulu series Fleishman Is in Trouble, set in 2016. I loved both of these, but I found the returning to the years in which they took place deeply unnerving. Both 2015 and 2016, as rendered onscreen, felt oddly nonspecific, other than marked by a naivete that filled me with dread. In the culture that comes out of that era and in my memory of it, these years fall into a no man’s land between now and nostalgia; can something really be the past, if the players and the problems are mostly the same?

Fleishman, in particular, made me consider that my nothing-news might have roots that go back years. Watching its conspicuous “I’m With Her” imagery — in one scene, Jesse Eisenberg stands on a corner completely papered with Hillary signs — I’m reminded of the last time I thought something deeply new was nigh. I thought there was going to be a female president. Back then, I only had one kid — my oldest was 2 — and I took him with me to vote on Election Day. We were covered in buttons. When I look at those photos today, I wonder if part of the reason nothing feels new is because I’m not simply hoping for it as purely as I did then. I don’t mean that to sound whiny or bitter. All I’m saying is: Some ass-kickings change you.

My phone takes habits I should break and makes them my whole deal.

Okay, let's untangle a third factor. I think considerable blame for this nothing-era rests on technology. My beef is with the algorithm. Not just that it's creepy, or predatory (we know this already), but that it's making us all so boring, burrowing us deeper into all our existing instincts and staving off new ones. If an alien landed here tomorrow and had only my phone to acclimate herself with, she'd be like, Okay, so it seems like what humans mostly do is... expand Twitter threads by women who are livestreaming their husband's final breaths, read People stories on horrible family murders, and field celebrity-death news alerts. Then I would be like, Okay, alien, I need my phone back for something now.

And look: I voluntarily clicked on all those death things once. It was not a hint that I wanted them delivered every hour on the hour. I have work to do, lunches to make, drop-offs and pickups to nail. I can't constantly be brought to my knees by a stranger's code blue in Topeka, or the passing of an actor I'm only pretty sure I watched on a show when I was a kid. But that is technology's plan, and this is technology's era. My phone takes habits I should break and makes them my whole deal. TikTok says: Hey, did you like this mom with hair taking her daughter to ballet? How about this other mom with hair folding her son’s socks? Streaming platforms take a show you like and say: Care to watch a slightly worse version? It’s all so annoying, convenient, and de rigueur at this point, we don’t even notice its side effect: It exterminates randomness. It starves you of discovery until, one day, you’re a 38-year-old woman thrilled to the bone by an inflatable costume.

We’ve had a tumultuous time; we’re starving for stability. But because we live in a country that refuses to codify the keys to it — a social safety net, accessible childcare, basic human rights and protections, common sense gun reform — we don’t have stability. Instead, we’ve been served sameness. And none of us are entirely capable of changing that. The best we can do is to keep pushing for changes, big and small, even when some people out there are still wearing red caps that say “again.”

I’m telling you now, when it comes to self-care, serums are out. Random shit is in.

At the risk of sounding like a Chicken Soup for the Soul workbook tie-in from the ‘90s, here is my plan: I want to talk to more strangers at the post office. Leave my phone in my bag in the waiting room. Join a club where everyone’s twenty years older than me, I don’t know. Drive a different route home. Buy a book that came out five years ago and nobody talked about. Walk. Let my kid pick out what’s for dinner. If they say something annoying, I won’t make it, and we’ll just have bacon. Maybe when all my other friends from high school say they don’t want to go to the next class reunion, I’ll text back: “Yeah! Me neither.” Then I’ll go. Just to see what happens.

I’m telling you now, when it comes to self-care, serums are out. Random shit is in.

And lucky for us, we have a prolific source of random shit. We have kids. Kids are nothing if not change. Their teeth fall out. They make enemies, and turn the enemies into friends. They inch up the doorframe, needing new height marks, no matter what is going on around them. Even as some politicians try to turn back the clock, kids are writing comic books and leaving them out for you to read. Even as the algorithm offers morbid peeks at dying strangers, kids are making up hundreds of compound words incorporating “fart.” Even as forces conspire to make parenting feel impossible, kids are going to school. And sometimes, at school, there are unicorns.

Kids are sorcerers of randomness. So pump them for it. They owe us. We’ve fed them thousands of meals. In the meantime, if you’ve been feeling like I do, know you’re not crazy or alone. And don’t give up on new. I like the ring of 2023. It sounds like promise, and $7-dollar cauliflower.

More Like This
Why You Should Go Ahead And Have That Fourth Baby
I Had Bariatric Surgery & Can Say The New AAP Guidelines Will Harm Kids
Julia Fox's Apartment Tour Made My Nipple Hairs Stand On End
Why Is My Vagina Itchy? Experts Explain
What Parents Are Talking About — Delivered Straight To Your Inbox