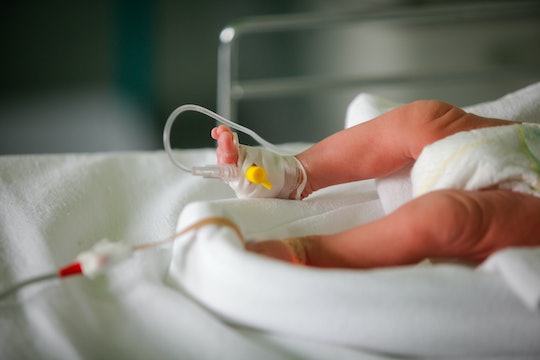 As Ukraine continues to endure bombardment from Russian forces, grim scenes have emerged, highlighting the fear and suffering of everyday Ukrainians. Unfortunately, not even the youngest citizens are spared. On the first day of the invasion, newborns at the Dnipropetrovsk Oblast Children’s Clinical Hospital were moved into a makeshift bomb shelter in the basement.

“This is the NICU. In a bomb shelter. Can you imagine?” Dr. Denis Surkov told The New York Times in a WhatsApp message. “This is our reality.”

In a video shared by The New York Times, approximately a dozen babies can be seen laid down close together on cots in what appears to be some sort of storage area. Most of the infants are swaddled in multiple blankets with tubes and wires visible. Medical equipment, including what appear to be oxygen tanks and assorted monitors, lay haphazardly beside them. A healthcare worker turns to the camera, briefly flashing a beleaguered smile before she turns back to manually ventilate an infant. Another of her colleagues does the same, only she doesn’t turn away from her task. Throughout the video, the whimper of what sounds like a dog can be heard, presumably coming from the pet carrier in the corner of the room.

The hospital is located in the eastern city of Dnipro, one of eight cities where explosions were reported among dozens of other military actions on Feb. 24. Dnipro is the fourth largest city in the country — home to approximately a million people — and is a major industrial hub in Ukraine, known for manufacturing, food processing, and aerospace technologies. Ukrainian President Volodymyr Zelensky called on Thursday for reservists aged 18 to 60 to “fight for the nation.” Ukraine’s military is less than half the size of Russia’s with far fewer resources.

Amateur video of a huge explosion in the area gives a glimpse at the enormity of the threat; the video of the babies and the staff caring for them, however, highlights what is at risk.

More Like This
Lawmakers Passed Two Bills To Address The Baby Formula Shortage
This Free Website Connects Parents Who Need Formula With Those Who Have It
Amanda Gorman Spoke The Truth In Powerful, Viral Poem After Texas School Shooting
New Dad Pete Buttigieg Shares Family’s Struggle To Find Baby Formula