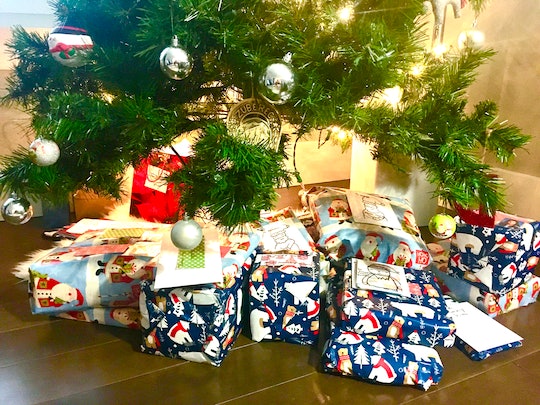 We're hearing a lot about supply chains and shortages, but not every family can get ahead of the potential issues.

Before we even got to Halloween, we were all hearing the news: though the pandemic seems to be at long last winding down, the supply chain issues and materials shortages that happened as a result are still going strong. Hundreds of thousands of shipping containers held up at ports. A staggering shortage of truck drivers. Paper is so scarce it’s becoming as valuable as the money printed on it (not quite, but you get the idea). The main takeaway of many of these gloomy forecasts? “Shop early for the holidays!” “Buy your Christmas presents now!” “Order your Hanukkah gifts yesterday, people!” Which, all things considered, is not bad advice. However, it’s not necessarily good advice either.

Here’s the thing with blanket solutions: blankets are only ever so big, right? It might cover a lot of people, but it’s definitely not going to cover everyone. Someone is going to get left out in the cold. Crucial to the idea of “shop early for the holidays” is the idea that there’s money ahead of the holidays to do the shopping. And, in many cases, not all families can afford it.

That’s according to reporting from the Washington Post with data from Nielsen data, the American Payroll Association, CareerBuilder and the National Endowment for Financial Education. And while the difference between 50% and 78% is huge, the fact remains that, any way you slice it, that’s millions and millions of people. This would seem particularly true of Millennials, who, between the ages of 25 and 40, are hitting major life milestones (having children, buying homes) but lack the savings and expected future earnings of previous generations to cushion the costs that accompany those changes.

What’s more, according to a survey from the Center on Budget and Policy Priorities, a staggering 34% of all Americans reported difficulty meeting basic living expenses in 2020, including nearly a quarter of folks making between $75,000 and $99,999 a year.

Of course, let’s be honest here: it’s overwhelmingly more of an issue, on every level, for the poor. The same CBPP survey found that 63% of those making under $25,000 a year struggled paying their bills. “Paycheck to paycheck” is more common and more dire among people living at or below the poverty line. (Not-so-fun-fact, the poverty threshold in the United States is $25,700... for a family of four. So if you’re a family of four making $26,000 a year, mazel tov! You don’t live in poverty, so, obviously, you won’t be needing the following social safety nets anymore...)

Savings is also an issue

Popping into the rainy day fund may not be an option for many, either: the savings just aren’t there. Pre-pandemic, Bankrate’s July 2019 Financial Security Index found that 28% of U.S. adults had no emergency savings. The January 2020 index found that 41% would have to borrow money to cover an unexpected expense of $1,000 or more.

Let’s not downplay how much heavy lifting “pre-pandemic” is doing in those already grim couple of statements back there. Because on the other side of that pandemic (I’m not saying “post” just yet...), millions of Americans have experienced financial hardship as a result of Covid-19 — either due to illness or job loss or both. The Pew Research Center found that about half of non-retired Americans will have more trouble reaching their longterm financial goals as the result of the pandemic. Pew also found that, a year into Covid-19, about half of all households had either taken a pay cut or been laid off. For Hispanic, Asian, and low-income households, that percentage rises to a majority (between 58% and 61%).

Speaking of how the pandemic relates to all this

Seriously, though, did we forget about the toilet paper?

Look, I’m not saying there was no reason to get maybe a few extra rolls — people were home more and going through more of it. And, yes, there were some supply chain issues. But the overwhelming issue was panic buying, which made the problem so much worse. If you want to do some early shopping, fine and good, but if you ever feel yourself thinking thoughts like “Maybe I should be 14 of this hot new toy just in case I might not someone else who’ll want it...,” fight that urge. Not only because it’s kind of a jerk move affecting the people who can’t get gifts early, but because you know your kid is going to do that thing where they change their mind about their most coveted toy at the last minute anyway and then what will you do? Then you’re just a jerk with 14 Tickle-Me Elmos stashed in your closet...

Shop early for the holidays if you can, but remember...

Look, there’s nothing wrong with getting a little bit ahead of the ball if you can: you’re not a bad person for being able to shop early and no one thinks you are. But suggesting this is the solution to the problem leaves a lot of people out and, unfortunately, it’s the people who are overwhelming left out.