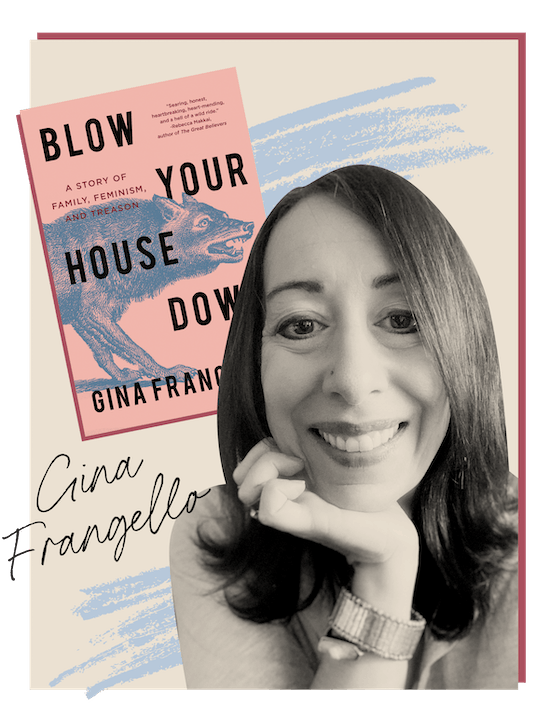 An excerpt from Gina Frangello's new memoir, Blow Your House Down: A Story of Family, Feminism and Treason.

It has been a while since my father and I have engaged in what might be called a meaningful conversation. Generally, just as when I rang home during college and my father would pass the phone directly to my mother (actually, he rarely answered the phone at all), so when the kids and I come downstairs to visit and my mother is home, my father only even turns down the television if it’s so loud that she complains she can’t hear what we’re saying over his racket. My father and I rarely talk exclusively, using my mother or my children as a conduit.

This was not always so. Because my father tended bar and kept unconventional hours in my youth, before he stopped working altogether, he was around the apartment much more than the typical father of his generation, and when he was home he was always in the living room or the kitchen, or on the front porch: accessible spaces where he made no particular effort at privacy. I could interrupt him anytime I wanted, ask him stories about the neighborhood when he was young, or beg him to read me the “funny papers.”

I remember long afternoons on the couch by our front windows, looking through the shutter slats while my father, stacks of newspapers knee-high beside him, lamented how no one baked potatoes in their piles of burning leaves anymore, describing those long-gone charred skins and the soft white meat inside with loving detail, or while he regaled me with a game my children still talk about, House on Fire, in which any new boy in the neighborhood would be lured into a game in which he was the “house” that was “on fire,” and before he knew it all the other boys — the firefighters — had surrounded him in a circle and were peeing on him, to put the fire out.

Although my father referred to his time with me as “babysitting,” the truth is that we spent a fair amount of time alone, especially after my mother went back to work. While during my late teens and early 20s, my father and I tangled some about my mounting feminism (this consisted mostly of my getting in his face, not the other way around), we never had any kind of falling-out or clear delineation of when we stopped talking to each other in any substantive way — when my mother became his proxy for all things parental. It happened gradually, such that I did not even notice it really — most of my friends didn’t talk much to their fathers either — and it is only now that my mother has been in assisted living so long that I realize my father and I have forgotten how to manage ourselves as a dyad: that the only way he seems to know how to interact with me is through statements of contention or need.

A few times, while my mother is gone, I go downstairs and sit next to my father, nestled in his heavily indented space on the couch, to watch television with him. Maybe I should claim this happened more than “a few times,” given how long my mother was gone, but the reality is that although I cooked his meals and arranged his pills and cleaned his blood — although I marched the children through his apartment frequently so that he could demand hugs and kisses and coo over their beauty each time as though seeing them for the first time — I did very little to meet my father’s needs for substantial social interaction while my mother was away. And so I am stunned one night when I am down there just days before my mother finally returns, and my father says, as though he has never uttered a less-than-lucid statement in his life, “Flower, you remember when I used to ride your ass all the time about how you should go hang around the playground or Fiore’s with all the other kids, and you wouldn’t do it?”

Do I remember this? Of course I remember. Before I made my father cry by moving out of state to go to college, I had already disappointed him through my refusals to make even any vague attempt at teenage cachet in his beloved neighborhood . . . by biding my time inside scribbling and reading until I could fly away from him and everything his world represented.

“Sure,” I tell him. “You wanted me to be popular like Angie and those girls. It’s understandable. But I was . . .” and here a line comes to me unbidden from Arundhati Roy’s The God of Small Things “. . . just not that kind of animal.”

“I didn’t know what the hell I was talking about,” my father almost shouts at me now. I look at him, confused — even when we used to talk all the time, we didn’t talk like this. “I thought it would help you if you went out like the other girls, if you got a boyfriend. You seemed lonely. But I was a chump. There was nothing for you there. I didn’t know you were going to end up with a completely different kind of life — some kind of life I didn’t know there was.”

In a movie about a father-daughter relationship, this scene would take place a day before the father’s death. This longed-for (so deeply, so wildly, that I had in fact not dared to long for it . . . never considered it imaginable) vindication of my choices, my pursuits, from my father would be the words to bring my entire life full-circle and grant me some previously elusive peace.

But in reality, my father is years from death still. Soon he won’t be able to walk well enough to get to the toilet, much less bang on the wall with his cane. Soon he won’t be capable of this sort of sustained introspection, and his life will disappear into a crack in his mind from which he will no longer emerge. My father and I will have years ahead of often ridiculous, often difficult interactions as his caregiving needs increase alongside my inability to meet them. And even now, there is a part of me — the same part that will not accept a meal train — telling me that my father’s beautiful epiphany is misguided, is undeserved because my life isn’t what he thinks; be- cause the “different kind of life” he didn’t know existed doesn’t exist in some sense, at least not anymore.

But for tonight, this is one true thing: my father is proud of me. He is proud of that young girl who resisted and refused his limited view of the world before any of these possibilities were even on the table.

But just for a moment, before I leave us to our respective unravelings, I’m going to step one inch to the side for a different view. Just for a moment, I’m going to see myself through my father’s eyes that night: his 45-year-old daughter who looks nothing like the 45 of our old neighborhood; whose life has looked like nothing he could have predicted, recognized, or even dreamed. Just for one fucking second, I am going to bathe in the light of his recognition — his seeing not just the 2013 me with a half-hidden face, but the me I have been for 35 years, who clawed my way somewhere new without a map while he did his best, out of love, to hold on to my ankles and drag me back. Oh come on, he used to snort when my mother suggested moving out of the neighborhood, everywhere’s the same—what are you, kidding? You think there’s somewhere different from here?

We are, my father and I, each about to keep sliding down an arduous hill, no possible traction to climb back up, no way of stop- ping until we reach bottom. But for tonight, this is one true thing: my father is proud of me. Not because I married well. Not because I gave him grandchildren. Not for my master’s degrees or my books he doesn’t read anyway. Not even for this house. He is proud of that young girl who resisted and refused his limited view of the world before any of these possibilities were even on the table.

It is enough. It is what I will be given, and for just a moment, I hold it close for that girl I used to be, who deserved his respect no matter what I may have done since. She is in here somewhere, still. She’s in me. Maybe she is envisioning something even now that I can’t yet see.