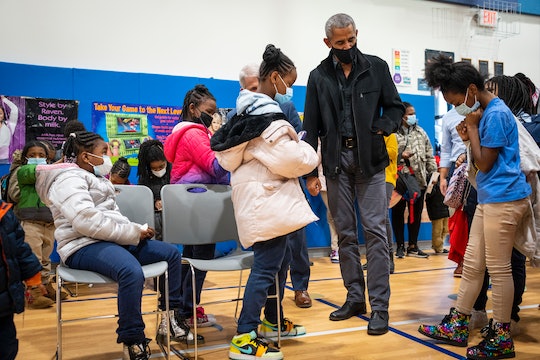 “I thought I knew Green Eggs and Ham better than most people, but at Kimball Elementary’s vaccination site earlier this month I finally met my match.”

Barack Obama claims to have met his match — his book match that is. The former president took to Twitter Wednesday to share a video of himself and a young girl bonding over a shared love of Dr. Seuss at a Covid-19 vaccination clinic serving children in the Washington, D.C. area earlier this month.

“I thought I knew Green Eggs and Ham better than most people, but at Kimball Elementary’s vaccination site earlier this month I finally met my match,” Obama wrote when posting the video to Twitter.

Obama joined Dr. Anthony Fauci, the nation’s top infectious disease expert, in surprising a group of elementary school students at a pop-up pediatric Covid-19 vaccination clinic held at Kimball Elementary School on December 1. In the clip, Obama can be seen approaching a young girl who is sitting alongside her caregiver waiting for her turn to receive the Covid-19 vaccine.

“Do you have a favorite book?” the former president asked the girl. “What is it?”

The girl, who has not been identified, told Obama her favorite book was Dr. Seuss’ Green Eggs and Ham, a book the president is more than familiar with, having read it aloud at the 2010 White House Easter Egg Roll.

“That is one of my favorites. That is a classic,” Obama told the girl before quoting one of the book’s most famous lines: “I do not like green eggs and ham.”

Without missing a beat, the young girl finished the stanza, telling Obama, “I do not like them, Sam I am.”

“You see there. You and me, we’re right there,” Obama said excitedly before going on to quote the next line of the book. “I do not like them in a box,” he prompted.

“I do not like them with a fox,” the girl responded.

Impressed, Obama jokingly suggested they partner up and create their own two-person show. “You know what, you and I could go on the road,” he told the girl. “That’s fantastic. That’s one of my favorite books.”

Obama’s appreciation for Dr. Seuss’ Green Eggs and Ham is relatively well known. In 2010, he gathered White House Easter Egg Roll attendees as well as his own two daughters on the White House Lawn to read what he hoped would be “the best rendition ever of Green Eggs and Ham.” He called the popular children’s book “great” and then proceeded to read it aloud in a spirited manner, often asking his audience to complete the book’s lines. At the end of his reading, Obama used the book’s message to encourage children to just try the broccoli and peas their parents put on their plates at dinner.

When visiting the vaccination clinic held at Kimball Elementary School in Southeast Washington, D.C. earlier this month, Obama encouraged parents to get their children vaccinated against Covid-19, noting it was “the best way to protect them” against the virus. Data from the U.S. Centers for Disease Control and Prevention (CDC) has shown that more than 65% of children between the ages of 5 and 11 have been fully vaccinated against Covid-19 while 77.3% have received at least one dose of the vaccine.

“We are just getting to the holiday season and we now have one more thing to be thankful for and that is that we can get kids vaccinated if they are between the ages of 5 and 11,” NBC News reported Obama said while speaking to families at the clinic. “I don’t love getting a shot but I do it because I know it’s going to keep me healthy.”