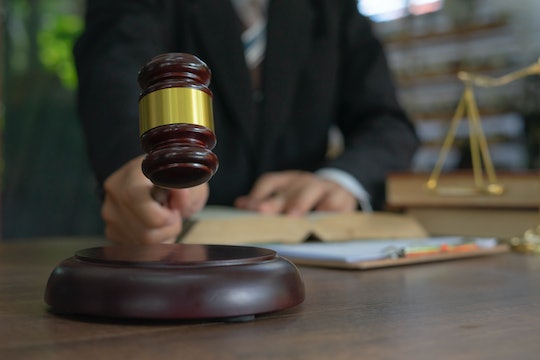 Twenty-year-old Brittney Poolaw was sentenced to four years in prison.

An Oklahoma woman was found guilty of first-degree manslaughter and sentenced to four years in prison earlier this month after experiencing a miscarriage in March 2020 while roughly 17 weeks pregnant. Oklahoma is one of at least 38 states to have passed fetal homicide laws, which treat a pregnant person and their fetus as separate, independent — and in this case, even opposing — crime victims.

Prosecutors argued 20-year-old Brittney Poolaw miscarried as a result of the alleged use of controlled substances. Advocates, however, have argued there was no evidence that controlled substances directly caused Poolaw’s miscarriage. According to local ABC News affiliate KSWO, an autopsy report revealed the fetus died at 17 weeks gestation and tested positive for methamphetamine, amphetamine, and another undisclosed drug. An obstetrician called to testify in the case told the court that although methamphetamine use can impact a pregnancy, it may not have been the direct cause of death, the news outlet reported. Additionally, both a nurse and a medical examiner testified as to seeing congenital abnormalities in the fetus.

In a statement released shortly after Poolaw was convicted and sentenced to four years in prison, National Advocates for Pregnant Women (NAPW) spoke out in her defense, arguing prosecutors had blamed Poolaw for her miscarriage “contrary to all medical science.”

“Ms. Poolaw’s case is a tragedy,” NAPW said in its statement. “She has suffered the trauma of pregnancy loss, has been jailed for a year and half during a pandemic, and was charged and convicted of a crime without basis in law or science.”

But Oklahoma isn’t the only state to prosecute pregnant women for miscarriage or infant loss. In 2010, the Guardian reported Bei Bei Shuai was eight months pregnant and severely depressed and ingested rat poison. Shuai was rushed to a hospital, where, at 33 weeks pregnant, a C-section was performed after fetal distress was detected. Shuai's child did not survive and prosecutors in Indiana charged her with felony murder that came with a prison sentence of up to 45 years. Shuai was eventually allowed to plead guilty to a misdemeanor charge of criminal recklessness and released on time served.

NAPW has cautioned Poolaw’s case is part of a growing trend in Oklahoma to use the state’s laws “to police pregnant women and to seek severe penalties for those who experience pregnancy losses.”

“This use of prosecutorial discretion directly conflicts with the recommendations of every major medical organization, including the American Academy of Pediatrics, all of which know that such prosecutions actually increase risks of harm to maternal and child health,” the organization concluded.

More Like This
Family Of Grandfather Killed In Highland Park Mass Shooting Say He "Saved" Their Lives
Ketanji Brown Jackson Spoke Directly To Her Daughters In Her Powerful Opening Statement
AAP Says Kids Will Face "Grave Consequences" Now That Roe V. Wade Is Overturned
Robb Elementary School Is Set To Be Demolished After Deadly Shooting