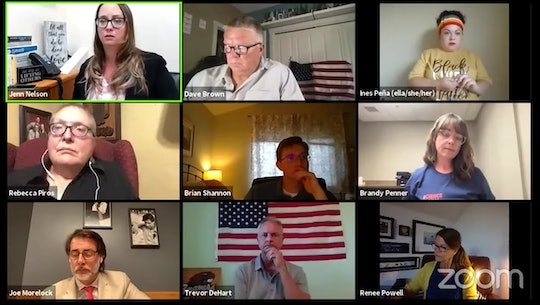 Newberg Public Schools superintendent has called for lawyers to review the measure, which would prohibit teachers from displaying, among other things, Pride flags and Black Lives Matter signs.

An Oregon school board has approved a measure that effectively bans political signage — including Black Lives Matter signs and Pride flags — from schools. After ending public comment well before even half of the 90 comments on record had been heard, the Newberg School Board voted 4-3 last week to prohibit what it vaguely defined as “political” signage and apparel in schools. Newberg Superintendent Joe Morelock, however, has said the measure cannot be enforced until it is reviewed by the district’s lawyers.

“Last night, the Newberg School District Board of Directors directed Superintendent Morelock to remove signs, placards, symbols, clothing, and pins that reference Black Lives Matter, the Pride flag, as well as political signs and symbols other than the American or Oregon State flags from our schools,” the district said in a statement directed to families and staff at Newberg Public Schools. “The reasons stated were to avoid any sense of political advocacy or support in our schools. The District will seek legal advice on this directive before its implementation.”

The district went on to note the school board’s policy committee had yet to determine what would be considered political under the policy but was expected to do so in the coming weeks.

Although the board approved its measure without clearly defining what it considered to be political, TODAY reported Pride flags and Black Lives Matter messaging were repeatedly referenced throughout the meeting, leaving little doubt that board members in support of the measure intended to at least see those items removed from classrooms and school hallways. The removal of Black Lives Matter signage, however, appears antithetical to directives laid out last year in the Oregon Department of Education’s Black Lives Matter resolution.

Specifically, that resolution “urgently” requested all Oregon public school districts to “affirm that ‘Black Lives Matter’ by striving to make space in classrooms and within the school community for dialogue and support for issues of race and equity” and “support educators and others who are making a special effort to let Black students and families know that they belong and are valued members of the school community.”

While the Oregon Department of Education declined to comment directly on the measure recently passed by the Newberg School District Board of Directors, a spokesperson emphasized the department’s commitment to Black students, educators, and staff across the state.

“The Oregon Department of Education declares that ‘Black Lives Matter’ in order to reinforce that the lives of Black educators, staff, students, and everyone in school communities are just as valuable as anyone else’s life; and that Black students matter and belong in our classrooms, just like all other students,” the spokesperson tells Romper. “The Oregon Department of Education recognizes that student health and safety are the cornerstones of education and that all students are entitled to a high-quality educational experience, free from discrimination or harassment based on perceived race, color, religion, gender identity, sexual orientation, disability, or national origin, and without fear or hatred, racism or violence. All staff and leaders are also entitled to work in environments that are free from discrimination or harassment.”

In comments to Romper, the Oregon Department of Education also described the Every Student Belongs rule, which the Newberg School District Board of Directors has discussed overturning, as “an important step in creating safe and inclusive school climates where all who participate in our school communities feel welcome.” Under the rule, hate symbols like the swastika, the Confederate flag, and the noose are prohibited from schools.

News of the vote has sparked criticism from a number of state legislators and education organizations, including the Newberg Education Association. “The fact is that this is an attempt to ban pride flags and BLM posters from classrooms because a small amount of people in this community are uncomfortable with them,” a statement shared on behalf of the executive board of the Newberg Education Association read. “A rainbow flag is a sign that people from all walks of life are welcome in that classroom and can be a beacon of acceptance for some kids who don’t normally get that. It does not mean that the teacher is attempting to proselytize students into a new way of life.”

Educators in nearby Beaverton also condemned the measure, arguing it constituted an attack on teachers’ freedom of speech and threatened students’ safety. “When students are not able to have their identifies affirmed, our schools are not safe places for all,” the Beaverton Education Association tweeted. “The actions taken by the Newberg School Board last night are a threat to the safety of students and an attack on the freedom of speech & professional judgment of educators.”

The Oregon Legislative BIPOC Caucus has also spoken out against the measure approved last Tuesday as well as the Newberg Public Schools Board’s plan to vote on overturning its anti-racist Every Student Belongs policy. “We are also extremely concerned by the board’s undemocratic attempt to push through their politically motivated agenda without input from the public,” their statement read. “After a difficult 18 months and with another school year just around the corner, we should be prioritizing a more welcoming and equitable education system. What the data shows is that we are not yet there, with BIPOC students experiencing racism in the classroom from a young age. As a Caucus, we remain committed to a more equitable education system that prioritizes student success and look forward to taking action during next year’s session to hold districts accountable.”

For now, the school district is attempting to let students know that all will be welcome when school resumes in early September. “We want to clearly state our continuing commitment to all our Newberg and Dundee students and staff, including our students and staff of color and those who identify as LGBT,” the district said in a recent statement. “We intend to demonstrate to each of you in word and deed that you belong and are welcome in all of our schools.”