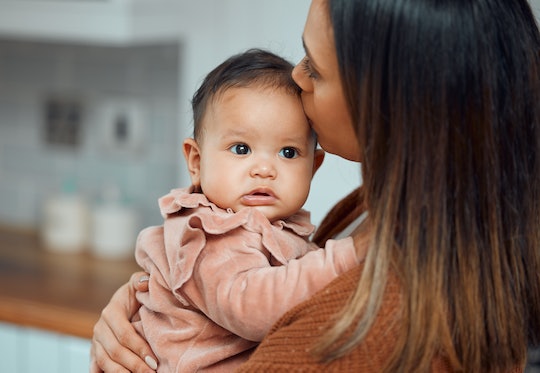 House Democrats added paid family and medical leave back into President Joe Biden’s Build Back Better spending package on Nov. 3, potentially paving the way for a showdown with Sen. Joe Manchin. The centrist Democrat has repeatedly expressed strong opposition to the policy and was reported to have forced Senate Democrats to drop paid family leave from the bill last week after rebuffing multiple efforts to compromise. It remains unclear, however, if Democrats will ultimately be able to pass the president’s spending package with paid family and medical leave included in it or if the policy will once again be scrapped from the legislation. Should the bill pass without paid leave, the United States will remain the only industrialized nation in the world to not have paid family leave.

How Did We Get Here?

When Biden first introduced his Build Back Better Act over the summer, it included a guarantee of 12 weeks of paid family and medical leave. On Oct. 22, however, Biden revealed he’d slashed that number down to just four weeks of paid leave following intense opposition from Manchin, one of two Senate Democrats reported to have spent the last few weeks steadily chipping away at the president’s bill.

And while four weeks of paid family leave would have been better than nothing, it would have been only marginally better given most child care centers don’t accept children younger than six weeks old. Additionally, patients who give birth via C-section are often only considered fully healed at six weeks. In fact, What To Expect notes that no matter how a person gives birth, the following first six weeks are considered to be the recovery period.

According to TIME, slashing the provision from 12 weeks to four wasn’t the only compromise the White House attempted to offer up. Democratic aides told the magazine another attempted compromise involved limiting the 12 weeks paid leave provision to cover only parents of new children as opposed to also covering full-time workers who needed paid time off to handle a qualifying medical event for either themselves or a close family member. Manchin, however, has remained resistant.

What’s Manchin Got Against Paid Leave?

In opposing paid leave, Manchin, a Democratic centrist, has cited concerns about the overall cost of Biden’s bill and concerns the policy would lead to a depletion of social security trust funds. “To expand social programs when you have trust funds that aren’t solvent — they’re going insolvent — I can’t explain that. It doesn’t make sense to me,” he told CNN. “I want to work with everyone as long as we can start paying for things. That’s all. I can’t put this burden on my grandchildren. I’ve got 10 grandchildren... I just can’t do it.”

Manchin also told HuffPost he did not think the president’s spending bill was the place to pass a paid leave policy. “I’m looking at everything but to put this into a reconciliation bill — it’s a major policy — is not the place to do it,” Manchin said.

Why Did House Democrats Add The Policy Back In?

On Wednesday, Speaker of the House Nancy Pelosi revealed she’d moved to return language regarding paid family and medical leave to the president’s bill in an open letter to her Democratic colleagues. “As we are reviewing priorities and at the urging of many Members of the Caucus, I have asked the Ways and Means Committee for its legislation for Paid Family and Medical Leave to be included in this morning’s hearing,” Pelosi wrote in her letter, noting that although the legislation’s overall cost has been reduced, the values it represents should not be reduced. “Today is another momentous day in our historic effort to make the future better for the American people, For The Children, to Build Back Better With Women, to save the planet.”

According to The Hill, Pelosi has asked for a provision guaranteeing four weeks of paid family and medical leave to be added back into the Build Back Better Act with a hope that House and Senate lawmakers will be able to come to an agreement on the proposal and finalize a bill that can pass both the House and the Senate. “It had been my intention throughout this process to put on the House Floor and pass a bill that would pass the Senate in the same form,” she wrote. “Because I have been informed by a Senator of opposition to a few of the priorities contained in our bill and because we must have legislation agreed to by the House and the Senate in the final version of the Build Back Better Act that we will send to the President’s desk, we must strive to find common ground in the legislation.”

But Will Manchin Budge?

That remains to be seen. When asked about Pelosi’s decision to add the proposal back in, The Hill reported Manchin again expressed his opposition to the policy. “That’s a challenge and they know how I feel about it,” the outlet reported he told reporters.

The U.S. Lags Far Behind Most Countries When It Comes To Paid Leave

The United States is one of only seven countries in the world that does not guarantee paid leave to new parents. According to the University of California, Los Angeles’ World Policy Analysis Center, the Marshall Islands, the Federated States of Micronesia, Papua New Guinea, Nauru, Palau, and Tonga are the other countries that, like the United States, have failed to provide paid family leave.

But the United States’ lack of a federal paid leave program doesn’t appear to stem from a lack of voter support. In fact, the issue doesn’t even appear to be one that pits Democrats against Republicans. Earlier this year, a poll commissioned by the advocacy group Paid Leave for All Action found 84% of voters — including 74% of Republicans — supported paid leave programs.

What Do Parents Think?

Unsurprisingly, a large number of parents have expressed frustration and anger upon hearing Democrats dropped paid family and medical leave from the Build Back Better Act. “It’s embarrassing and just plain wrong that the U.S. doesn’t have paid parental leave,” John Legend tweeted late Wednesday. “This needs to happen and needs to be in the Build Back Better Bill.”

Many directed their anger at Manchin. “Everyone please bring your newborn babies to @Sen_JoeManchin’s house,” one parenting blogger tweeted. “He has volunteered to babysit them for the first four weeks of their lives.”

Others, like Simona Grace, a single mother who founded the Democratic PAC Moms In Office, have accused lawmakers of leaving parents, and especially women, behind by cutting paid leave. “In 1971 it was Nixon who vetoed the childcare bill,” Grace tweeted. “In 1992 it was George H. W. Bush who vetoed the family medical leave act twice. In 2021 it is Joe Manchin who opposed a national paid family leave program in the Build Back Better Bill. Leaving women behind. Again.”

Some parents have even shared their own personal stories of postpartum recovery in an effort to drive home just how vital and life-changing paid leave would be. In a series of tweets, mom of three Liuba Grechen Shirley recounted how, at two weeks postpartum, she spiked a 105-degree fever and nearly fell unconscious while home alone caring for her children. “I was alone bc Chris was out of paid leave & had gone back to work,” Shirley wrote, adding doctors discovered she had retained a piece of placenta, which caused a serious infection. Shirley said she was hospitalized for a week and required IV antibiotics for another week after that.

“So at 4wks postpartum, I was sick as a dog, with an IV in, nursing two babies,” she wrote. “I was in no shape to put on some pants, hand over my infant to strangers, and head into the office... Childbirth is no joke. Recovery is no joke. Paid leave is not a vacation. We are sending women bleeding, swollen, in stitches, in agony back to offices across this country.”

This article was originally published on Oct. 28, 2021