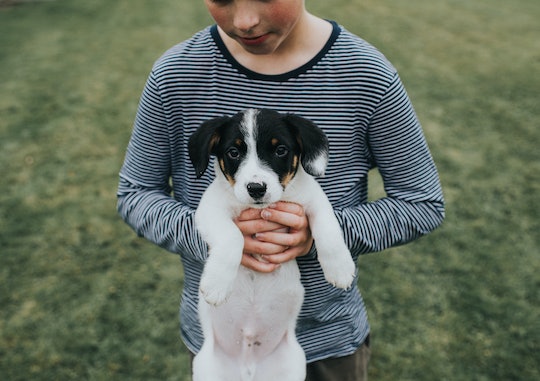 The Pandemic Puppy Boom And The Regret That Followed

Everyone is getting a dog, but no one is talking about what happens next.

“You don’t get the dog you want, you get the dog you need.” This statement came from the husky-voiced dog trainer I hired 10 days after we adopted Kiwi, a laughably scruffy, 1-year-old terrier mix with two different colored eyes and a perpetual mohawk. Kiwi was an angel for the first two days (playful as a puppy, but totally docile; gentle with kids and cats; housetrained and decent on a leash, despite being new to a big city). But by day three, she started barking her head off and the yapping hadn’t let up.

When I filled out the applications at rescue organizations, in the box where it asked about “pet habits that I just cannot tolerate,” I typed “excessive barking.” With two volume-challenged kids, our home is hardly quiet, but I’m volume sensitive and I didn’t want to knowingly amp it up. The rest of dog ownership — the messes, the walks, the filter you have to put on Airbnb for “allows dogs” — I was down for it.

But here was Kiwi, woofing enthusiastically at every dog on the street, freaking out about the rustling sounds in our building’s hallway, and yapping at our two (horrified, disgusted) cats. Sometimes she just seemed to be barking at nothing at all.

The night after our first meeting with the trainer, I crawled into bed immediately after dinner and cried. I am a dog lover and a rescue-dog proselytizer, and I felt like I’d made a huge mistake.

New-dog blues is definitely a thing. I cried nearly every night wondering what I had done.

Turns out, there’s a term for what I was going through: “post-puppy depression” or “post-puppy blues.” You won’t find it in any textbook (I stumbled on it while I was researching anti-barking remedies) but once I started asking around, I found tale after tale of people who went through it. First, the excitement: We’re getting a dog! Next, the Instagram post welcoming The Most Perfect Dog! And then the giant, sad trombone as things get rough and waves of regret roll in.

“New-dog blues is definitely a thing,” says Tiffany Lacey, the executive director of Animal Haven, a shelter in New York City, where during the pandemic there have been hundreds of inquiries for each adoptable dog. “I’ve experienced it over and over again with my new dogs — especially one that I adopted years ago. He was beyond a barker. It was unworldly. I cried nearly every night wondering what I had done.”

There’s been a huge pet boom during the pandemic; dog ownership — via adoption or breeders — has skyrocketed. In some areas, shelters were almost cleaned out of the most adoptable dogs. Sites like Petfinder have reported huge increases in adoption inquiries and breeders of popular types like the ever-increasing poodle-mixes are inundated with requests for new litters. Many people I know reported applying for dozens of different rescue dogs before finally being able to snag one they wanted, sometimes many months later. Others abandoned the search and sought out a breeder, some paying mid-four figures for a 10-week-old puppy.

It’s not that surprising: suddenly we were all stuck at home, floating from meal to meal, with seemingly ample time to care for a four-legged creature. Beyond logistics, many of us felt adrift, scared, and lonely. Joy, too, has been in short supply — for adults and kids alike. Bored kids presented convincing PowerPoints and really applied the pressure. Dogs add a natural rhythm and structure to each day. Having to walk (at least) around the block is a way to punctuate time, and perhaps even prompt putting on a bra. And studies have found that people with pets are less likely to suffer from depression than those without and have lower blood pressure in stressful situations. Is it any wonder that @DogsofInstagram has 4.8 million followers?

But once all those dogs get home, reality sets in. Puppy excitement can give way to puppy regret. Those tiny teeth are much sharper than they seem, and just keep getting bigger. They can lunge unpredictably at your terrified (and now pissed-off) neighbors. They can be very time-consuming; some have rather sensitive (and explosive) digestive tracts; it turns out that proper training, while it’s not brain surgery, requires an annoying level of persistence and consistency. Still, no one wants to complain about how rough things are in doggy-ville when not only is there a deadly virus ravaging the country, but, well, you’ve already bragged about that new dog on Instagram.

Unlike so many challenges this year, this was entirely self-inflicted.

As Kiwi settled in, I was increasingly unsettled. I felt like I was locked into something I couldn’t escape — and the source of my anxiety was the very thing that needed attention, love, and walking, multiple times a day.

One pet industry survey found 20% of owners had considered giving up their pets in 2020.

No matter the situation, it can be stressful — for both humans and animals. “We do try to warn folks of this, especially during a time when people seem to be getting animals to fill a void. Shelters don’t want a lot of returned animals,” says Lacey. Getting a new dog — of any age — tosses you into something completely new. “You may be waking up at 5 a.m. to go for a first walk and then going out in your pajamas at 11 p.m. for a last walk. We actually get animals surrendered for this very reason, ‘I’m overwhelmed,’ or ‘It’s just too much.’ Even if there aren’t big issues, just the day-to-day care can throw you off your game,” she says.

This whole year has been one giant exercise in being thrown off your game. We’ve all been shouldering new and heavy loads — sudden home- and/or Zoom-schooling, increased caretaking duties without reprieve, job losses and financial worry, general anxiety, grief. Adding new-pet woes to all this can feel almost laughable, but it’s real too. One pet industry survey found that 61% of pet owners felt concerned about their financial ability to pay for their pet’s expenses and 20% had considered giving up their pets in 2020.

I wish I’d spoken to Lacey earlier. I think what may have helped me was knowing that my feelings were totally normal. There’s plenty of info out there about how to prepare for a dog in terms of what you’ll need to buy and how you may need to adjust your schedule, but little in terms of how a pet can impact you emotionally — not to mention how a dog’s behavior may start out one way and then change over time.

“The dog you adopt may have been bounced from shelter to shelter or foster to foster; it may have been living in complicated environments. Their behavior right away may not be how it ends up being a bit down the road,” says Philip Tedeschi, executive director of the Institute for Human-Animal Connection at the University of Denver’s Graduate School of Social Work, whose work focuses on the connection between humans and animals. Dogs need time to acclimate, too; it often takes at least three months before a dog has adjusted to its new home.

Keeping your expectations reasonable is paramount, says Tedeschi. People sometimes have a social media-influenced vision that is all floppy puppy videos, silly dog sweaters, and cuddling on the couch. And that idealization can add to the feeling of shame or disappointment when reality is not quite as cozy. Consider how you’ve handled some other transitions: Do you tend to have spikes in anxiety or depression before, during, or after a big life change? Given that I experienced postpartum depression, as well as lifelong anxiety, it’s not all that surprising to me now that this was another time when my struggles would spike. My mind often feels messy, and so when things feel out of control, I can spiral.

Tedeschi suggests people plan ahead, and “ask for help, both to gain perspective or just to take a break. Puppies are babies and place a significant demand on our attention. We have to take extra good care of ourselves.”

I can’t pretend that this is one of those dog stories with an ending where I say something about how “my dog saved me” or “taught me how to be a better version of myself.” A year after adopting Kiwi, I adore her immeasurably, and she’s the star of our family circus. She doesn’t just sleep in the bed, she gets under the covers. She adds so much joy. But she’s still... a barky dog. It still kind of makes me crazy. With training, she has improved enough so that walks, in particular, are mostly pleasant. But the ring of the doorbell and people coming over still make her bonkers.

If, as that trainer suggested, this dog was put in my path for some purpose, I’m not sure I know what that is or if I even buy it. Maybe it’s that I can learn to live with the thing that I thought would make me unravel, or that my attempts to control the things around me are futile.

But if you’ll permit me a last-paragraph lesson learned, I’ll say this: I think that what counts is our ability to adapt, to get knocked down — by things that may seem little, and by the big stuff too — and to scramble back to our feet, even in the face of a challenge that shows no sign of abating. Flexible and resilient, dogs are a good role model for that, and Kiwi, flawed as she may be, is Exhibit A. The pandemic has been a series of big changes and small accommodations, lost plans and moving finish lines, and while I often wish I could handle them with more grace — without the fist-shaking, the crying in the shower, or the shutting-down at times — I have stood up and pressed on.

Cue the sound of barking.

More Like This
Weed Moms Are Changing The Culture Around Marijuana
My C-Section Almost Derailed My 5th-Degree Back Belt — Almost.
My Slowest Marathon Ever Is The One That Makes Me Most Proud
My 4-Year-Old Is Basically My Personal Trainer & It Works
What Parents Are Talking About — Delivered Straight To Your Inbox