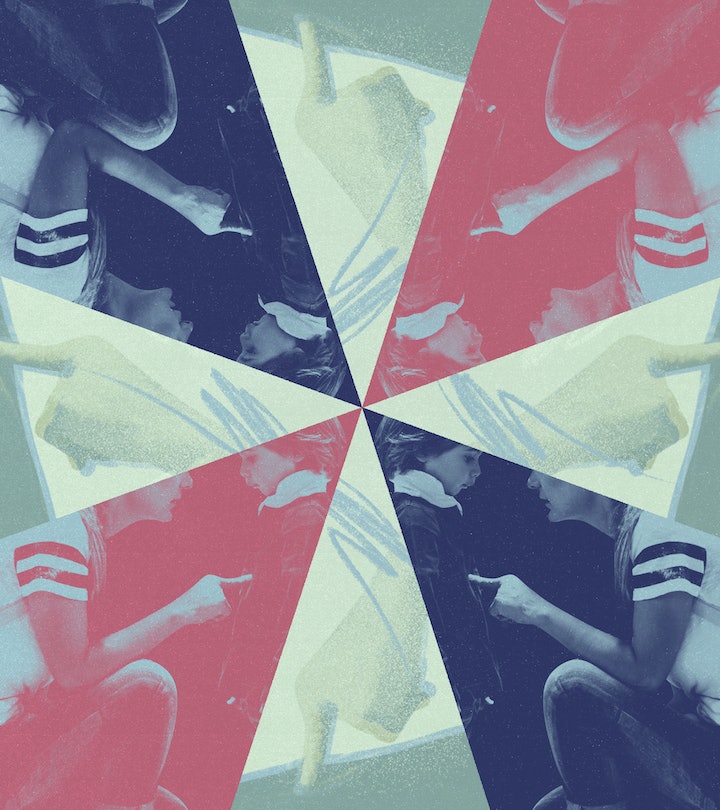 Raising Children Is A Fun-House Mirror Of Self-Confrontation

At least once a week, my kids say or do something that reminds me of myself at their age. And it’s rarely their redeeming qualities that I relate to.

Want to relive your every childhood flaw? The cringey adolescent mistakes you wish you could push so deep into the recesses of your consciousness, they become impossible to retrieve? The random throwaway barbs you uttered that now make you want to curl up in regret? Looking for another form of endless self-flagellation? Good news, I’ve discovered it. It’s called parenting, and the line forms to the left.

At least once a week, my kids say or do something that reminds me of myself at their age. And while they’re both tolerably delightful humans on a good day, it’s rarely their glowing, redeeming qualities I relate to. No, it’s the awkward traits and questionable actions that trigger the most vivid flashbacks and sometimes make me wonder if genetic inheritance is nothing more than a sadistic mindgame.

People love doling out trusted wisdom to new parents, and it runs the gamut from the practical to the frankly useless. A large chunk of it takes the form of twee aphorisms: “The days are long, but the years are short.” “It takes a village to raise a child.” “It’s all just a phase.” I’m probably guilty of using these trite cliches myself at some point. But nowhere in the annals of parenting advice do I remember anyone telling me: “Have children, it’ll help you feel terrible about yourself.”

Identifying with our children’s shortcomings begins early. If you’re like me, right around the time the lactation consultant arrives in your hospital room post-delivery and gently suggests you could be trying harder, a sinking anchor tightens around your ankle and there’s no going back. As parents, we are pre-programmed to take any hurdle that appears in our child’s path and internalize it as our own failure. Their feeding troubles, their sleep regressions, their social challenges...you name it, we’ll claim it. And this quickly spirals out of control. Before you know it, we’ve reached the point where our kids can’t make a single mistake without us trying to uncover how this is all our fault.

But nowhere in the annals of parenting advice do I remember anyone telling me: “Have children, it’ll help you feel terrible about yourself.”

We could get psychological and conclude that of course parents do this because having kids is ultimately a selfish act, an attempt to extend and defend our egos. But is reverse-sublimation really what’s happening here? I’m not some bored spectator existing on the margins of my children’s lives, trying to thrust my way into center stage. It feels, instead, like each time they do something wrong, parents are forced to look into the wonky funhouse mirror we thought we’d stashed in the attic, the one that gleefully reminds us of when we behaved just as idiotically. Which then means we start flailing about, doing whatever we can to ensure they don’t repeat our mistakes.

This past spring for instance, our six year old declared, in his infinite wisdom, that he wanted to learn soccer. Turns out, he meant he’d go to his first class and try it for ten minutes before deciding it wasn’t for him. My partner and I thought it would be in his best interest to keep going anyway. He proceeded to spend every minute of the next eight sessions curled up on the ground, whimpering and refusing to play. On the drive home from the third weekend of this extended torture, my husband raised the white flag. “That’s it. He doesn’t want to do this, and neither do I.”

My fit of pique, on the other hand, was just getting warmed up. “This kid only thinks he doesn’t want to play soccer, but oh, he does,” I fumed. “He really, really does. I’m not letting him give up. We’re going to make this work.”

I crouched next to him week after week, looked into his eyes (so much like looking at my own), and delivered rousing motivational speeches about the importance of trying despite fear of failure. But, to no one’s surprise, the recalcitrance is just as strong with him as it was, or is, with his mother. No more soccer, he said.

I can try telling myself that I wanted to teach him tenacity, that my patience levels had reached a dangerous new low during the pandemic, or that my wallet was affronted because we’d already paid for these soccer lessons. While these were all true, my determination was mostly tied to memories of my seven year old self, flushed with the success of quitting both piano and art within a few weeks of each other. My parents said all the right things, making firmly compassionate points about effort and regret. I can still picture my petulant expression, my complete unwillingness to budge. I was done and didn’t care what anyone thought. As an adult looking back, I can also admit that I was wrong.

Now the tables were turned, and so my son and I kept up our ridiculous soccer charade. I crouched next to him week after week, looked into his eyes (so much like looking at my own), and delivered rousing motivational speeches about the importance of trying despite fear of failure. But to no one’s surprise, the recalcitrance is just as strong with him as it was, or is, with his mother. No more soccer, he said.

You can probably guess who won this scrimmage. (Hint: not me.) If I’m being honest, the entire time I was making my responsible mom speeches, I had to fight every possible impulse to agree with my kid. I get it, I wanted to tell him. Soccer is stupid. As your parents, we are wrong to make you do this, even if you’re the one who was adamant about wanting to play soccer in the first place. You should quit. It’ll make me feel better about quitting piano and art lessons. And, um, swimming lessons. And violin. It will allow me to come to terms now with the remorse I refused to feel then.

While women tend to specialize in this brand of brooding, men are not exempt from it. My husband totally and completely identifies with our older son. Our eight year old’s tendency to wallow, his anxiety about circumstances beyond his control, his desire to please and prioritize others even when it’s detrimental to his own wellbeing — all of it serves as a familiar, terrifying reminder for him. I’m content to encourage my partner’s fixation, because I’m similarly focused on the eerie resemblance between myself and our younger child. His stubbornness? See farcical example above. His unwillingness to ask for help? I may have some experience with that. His thoughtless defiance? No comment.

Most days, raising children feels like an exercise in parenting ourselves. They lay our youthful embarrassments and insecurities bare before us and we can’t look away.

Most days, raising children feels like an exercise in parenting ourselves. They lay our youthful embarrassments and insecurities bare before us and we can’t look away. In trying to puzzle through their behavior, sometimes it feels like we’re actually trying to better understand our own past choices. And because we love our kids so damn much, we can never truly dislike in them the things we may secretly loathe about ourselves. We want to protect them, to nurture, to champion. So witnessing their mistakes offers us the redemption we’re seeking. If I can forgive my son his trespasses, I can certainly forgive my own.

In the meantime, to offset potential spiraling, the scales keep attempting to balance themselves. For every unsavory memory that blossoms like a blue bruise, there are the lighter, lingering, joyous reminders. Our younger son’s chortle and wicked sense of humor are dead ringers for my husband’s, but his quiet, intensely-felt emotions are mine. Our tall, gangly older child is a dreamy, book-loving foodie like his mother and a sharp, pun-loving athlete like his father. His generosity with compliments, dispensed daily like so many Candyland sprinkles, is an equal wonder to us both.

The act of parenting is a palimpsest. My husband’s childhood and my own may be faintly visible beneath the story of our sons’ young lives, but that doesn’t mean we need to retrace and mull over the past endlessly. Just as our children aren't magically redeemed when they mimic our better qualities, repeating our mistakes doesn't signal their doom. Or ours, for that matter — as much as it can sometimes feel that way.