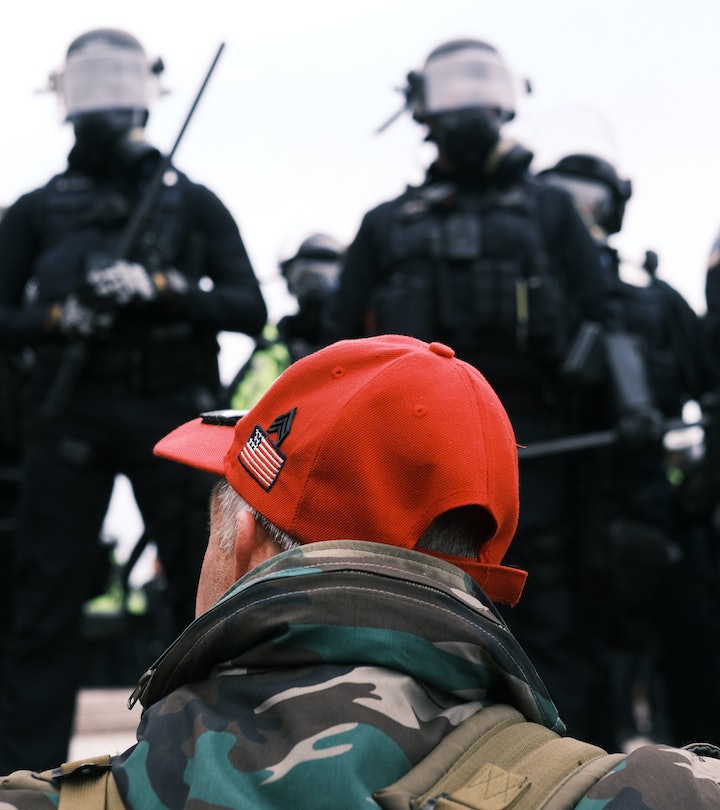 Fearing Violence, Some Parents Are Keeping Their Kids Home On Inauguration Day

"My children approached me asking me if they thought our neighbors would retaliate against us."

For many, the attack on the Capitol turned nebulous worry about the presidential transition into concrete fear. Deadly violence taking place on the very spot where President-elect Joe Biden is meant to be sworn in has deepened people's concern and, in some cases, changed their Inauguration Day plans. In fact, some parents have questioned whether to keep children home on Inauguration Day.

More Like This
People Have Thoughts About A Mom Saying That Parents Are "The Real Teachers"
Wait, Did The Government Actually Do Something For Parents?
I Hope The Meaning Of My Daughter’s Name Will Guide Her Life, As Mine Ultimately Did
What I Talk About With My Mom Friends

The concern, even for those outside D.C., is not entirely unfounded. According to a report from the FBI, protestors, sympathetic to President Donald Trump's thoroughly debunked claims of "election stealing," have planned demonstrations in all 50 states in the days leading up to and including the inauguration. In response, state capitols across the country have been preemptively fortified or even closed ahead of Inauguration Day. NBC reported that the National Guard has been deployed to at least 13 capital cities.

Indeed, many parents plan to keep their children home on Jan. 20. "My family and I are a blue dot living in a sea of red," Lyndsay Scott, a mother of two who lives in Oakdale, California, tells Romper. "My children approached me asking me if they thought our neighbors would retaliate against us, as we were the only Biden sign in our neighborhood of over 300 homes. It’s been a stressful time, and we are planning on staying home all day long."

"I am worried. I don't think I'll leave the house that day if I can get away without it," says mother of three Charly G. of Palm Bay, Florida.

While tensions are high across the United States, all eyes are on D.C., where more than 20,000 National Guards have been deployed — almost three times higher than were present for Trump’s inauguration in 2017, as USA Today reported. Acting Capitol Police Chief Yoganada Pittman announced in her first statement after being sworn in on Jan. 8 that there will be no public access to the Capitol grounds during the inauguration. And in an interview with PBS News Hour, D.C. Mayor Muriel Bowser shared that requests she had made to federal agencies to coordinate with the D.C. police had been granted. Some school districts, particularly those in and near D.C., have preemptively gone virtual for the week, according to The Washington Post.

Out of concern for potential violence, as well as the public health crisis of COVID-19, both Bowser and Biden's Inauguration Committee have urged the public not to travel to D.C. for the event. In New Jersey, the Associated Press reported that Gov. Phil Murphy has ordered state employees to work remotely on Inauguration Day, saying: “With all the other tension in the country right now we’ve made the call that working from home right now, state offices, is the right call."

Still, the fear of a reprisal of Jan. 6 — or an expansion of violence to other parts of the country — looms large. And even among parents confident in their family's personal safety, some question whether they should allow their children to watch the inauguration on TV in real time, for fear of potential unrest.

"I am legitimately concerned about my children witnessing massive attacks and violence," Sharon Paige, a mother of two grade school-aged children who lives in the Bronx, tells Romper. "I’m terrified." And yet while many parents fear for the day, the worry is tempered with excitement. "I want to watch with my children because of the historical importance," adds Paige, "not just welcoming a new president but welcoming a woman into the executive branch for the first time ever."