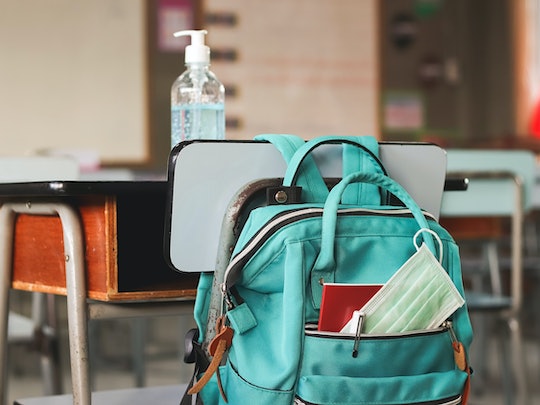 At least a dozen parents are suing the state of Utah over legislation that effectively prohibits school districts from enacting universal mask mandates. In a lawsuit filed Monday, parents allege the state’s ban on schools mandating masks has deprived students at increased risk of severe illness of their right to a free public education as those children are now unprotected from Covid-19. They’ve asked a judge to strike down legislation passed by state lawmakers earlier this year that restricts school districts’ ability to implement mask mandates.

“We believe the law is unfair and unconstitutional,” The Salt Lake Tribune reported Greg Skordas, an attorney representing the 12 Utah parents behind the suit, said Monday during a press conference. “Utah’s constitution is one that guarantees our children an education. That’s unfettered.”

According to the paper, almost all of the parents have children with either a health condition that makes them high risk or a learning disability that makes remote learning more difficult if not nearly impossible. Most of the children are also under the age of 12 and thus not eligible to receive a Covid-19 vaccine, The Salt Lake Tribune reported.

But legislation due to Utah House Bill 1007 and Utah state Senate Bill 195, school districts across Utah face a number of challenges when it comes to implementing mask mandates. HB1007, for example, “prohibits a face-covering requirement to participate in or attend instruction, activities, or in any other place on the school campus or facilities in the system of public education after the end of the 2020-2021 school year.” Under SB195, local health departments can issue mask mandates, but county leaders can vote to overturn them — something ABC 4 reported happened in Salt Lake County earlier this month after local health officials attempted to implement a school mask mandate for children under 12.

Most recently, Salt Lake City Mayor Erin Mendenhall stepped in last week to use emergency powers to order masks to be worn in the city’s K-12 schools after the local school district said it would not implement a mask mandate. Utah House Majority Whip Mike Schultz, however, has already threatened to introduce new legislation aimed at limiting such use of emergency powers in the future.

Skordas has argued the bills violate Utah’s Constitution, which guarantees every person the right to a free and safe public education. “They say you can still go to school but you don’t have to wear a mask. If that’s not safe, you’re effectively saying you can’t go to school," Skordas told Fox 14. "These kids want to go to school. They want to get the education they’re entitled to under the constitution."

While those children want to attend school in person, their parents want to ensure they’re protected.

“There’s a lot of vulnerable kids,” Jessica Pyper, another parent behind the lawsuit in Utah, told Fox 13. “I’m like one of thousands of families in Utah who's going through this and I feel like we need to be acknowledged. We exist and our kids deserve a safe, in-person learning environment or as safe as possibly can be.”

But Utah isn’t the only state to see lawsuits over mask mandate bans. On Tuesday, the American Civil Liberties Union (ACLU) announced they were partnering with Disability Rights South Carolina, Able South Carolina, and parents to sue to end the state’s ban on mask mandates in schools. “This is a disability rights issue,” the ACLU said in a statement Tuesday. “Prohibiting schools from taking reasonable action to protect the health of their students forces the parents of children with disabilities to make an impossible choice: their child’s education, or their health.”