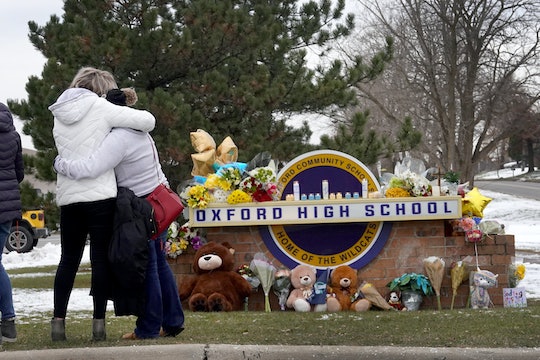 “Owning a gun means securing it properly and locking it and keeping the ammunition separate and not allowing access to other individuals, particularly minors.”

EARLIER: The parents of a Michigan teenager accused of killing four students and wounding at least seven others Tuesday in a shooting at Oxford High School just outside Detroit could face charges themselves. Although prosecutors have not fully decided if they will pursue charges against the teen’s parents, they’ve alleged the suspect gained access to a firearm they owned and have argued that they should be held accountable for failing to properly secure the weapon.

“We know that owning a gun means securing it properly and locking it and keeping the ammunition separate and not allowing access to other individuals, particularly minors,” The Detroit Free Press reported Oakland County prosecutor Karen McDonald said Wednesday during a press conference. “We have to hold individuals accountable who don’t do that.”

Oakland County Sheriff Michael Bouchard has confirmed the 15-year-old suspect used a 9mm Sig Sauger SP2022 handgun that had been recently purchased by his father during a Black Friday sale, according to The Detroit Free Press. Additionally, the paper reported investigators had found images shared to social media that showed the teen using the weapon for target practice prior to the shooting.

It’s unclear, however, if prosecutors will be able to successfully pursue charges against the suspect’s parents. Currently, Michigan law prohibits federally licensed firearms dealers operating within the state to sell a firearm unless the sale also includes a trigger lock and a gun case or storage container capable of being secured to prevent unauthorized access to the weapon. But while state law requires the sale of trigger locks and storage containers, The Giffords Law Center has noted that Michigan law does not require gun owners to actually lock their weapons.

That being said, there are state laws that could provide some degree of accountability for adults who, purposefully or through negligence, allow a minor unsupervised access to their firearm. In a brochure summarizing laws pertaining to the use and storage of a firearm in a home environment, the Michigan Department of State Police has noted that firearm owners “may be criminally and civilly liable for any harm caused by a person less than 18 years of age who lawfully gains unsupervised access to your firearm if unlawfully stored.” State law also requires federally licensed firearms dealers to notify customers of this fact.

On Wednesday, authorities told the judge overseeing the suspected shooter’s arraignment hearing that they had recovered two different videos filmed the day before the shooting which featured the suspect talking about shooting and killing students at Oxford High, The New York Times reported. According to the paper, authorities also reported finding a journal belonging to the suspect with entries in which the teen expressed a desire to “shoot up the school.”

Speaking at the arraignment, prosecutors argued the teen had planned the shooting and brought the gun to school with the intent of turning it on students, teachers, and staff. “He deliberately brought the handgun that day with the intent to murder as many students as he could,” The Times reported assistant prosecuting attorney Marc Keast said. “He methodically and deliberately walked down the hallway, aiming the firearm at students and firing.”

While potential charges against his parents are still being discussed, the teenage suspect has been charged as an adult on four counts of first-degree murder, one count of terrorism resulting in death, seven counts of assault with intent to murder, and 12 counts of possession of a firearm.

This article was originally published on Dec. 2, 2021