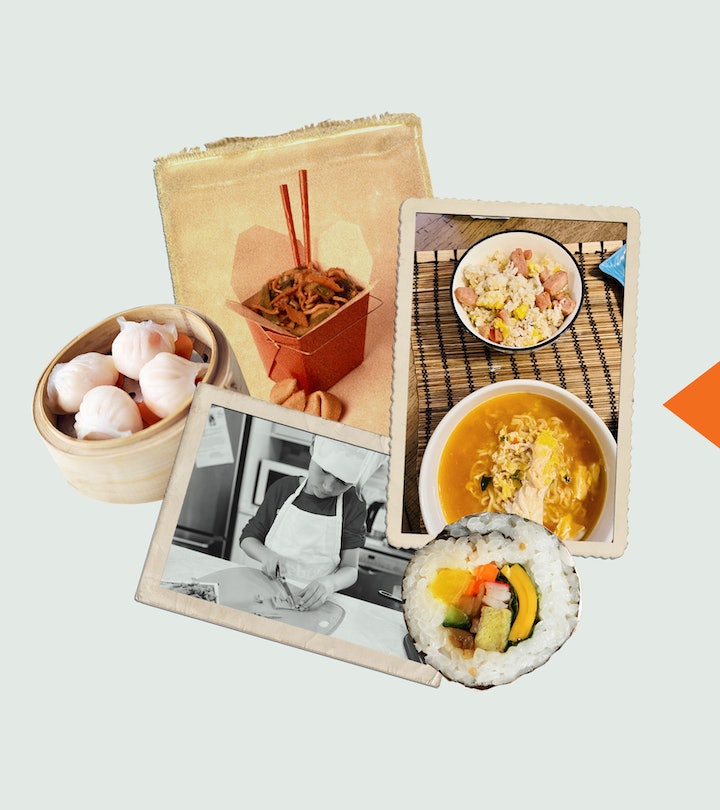 Unable to separate need and love, they wanted me to always need them.

When I was 9 years old, my ethnic Chinese family immigrated from Korea to America. This caused a seismic shift in our day-to-day life, particularly in the way we ate. After we immigrated, uninterrupted family meals where the four of us all sat together became rare. Instead, because we operated a takeout restaurant where I worked alongside my parents, meals were taken in shifts, or in hurried bites behind the counter sitting on upside-down soy sauce buckets. When a customer arrived, one of us would stop eating to take their order.

Cooking was my mom’s way of showing us love, so if I came into the kitchen asking to learn or offering to help, I was rushed out impatiently. Meanwhile, my father was the trained chef — he wasn’t in the kitchen to teach. As a result, despite living a food-centered existence growing up, I never learned to cook.

Our restaurant was open seven days a week, every day of the year except Christmas and Thanksgiving Day, which meant opportunities for my parents to cook at home were special occasions. My mother took particular pride in cooking fried rice and homestyle potato soup just the way my little brother and I liked it — something she couldn’t do most days. Even though she must have been exhausted, my mom hand-rolled kimbap, claiming they were fun to make, serving the delicate, colorful morsels alongside spicy kimchi soup simmered with tofu. On Chinese holidays, she spent entire mornings crafting beautiful dumplings with different fillings — a standard beef or pork for her and me, fish for my father, and a no-veggies kind for my picky brother. My brother and I always devoured every bite, savoring the attention we craved.

When my father’s busy schedule allowed him time to cook at home, he served up banquet-worthy dishes like fried whole fish, oyster mushrooms stir-fried with garlic and white pepper, and succulent steamed crab with ginger. My father cooked to recreate the taste of his motherland and flex his culinary talent. Time off was precious and cooking was not child’s play.

After I left for college, I craved flavors that were synonymous with comfort, warmth, and safety. I began calling home with questions — only my parents couldn’t and wouldn’t provide the answers I needed. They didn’t think in measurements, steps, or recipes. They cooked by feel and by muscle memory, but there was more to their hesitation than an inability to convey the recipes verbally. There was a power play, a need to withhold what I wanted. “Come home and I’ll make it for you,” they’d say.

When food meant love, it also became the currency for my affection in return. My parents, who were never able to separate need and love, wanted me to always need them.

But I grew up American; I wanted a relationship with respect that ran both ways. I wanted my own dreams to matter. I needed more than the obligation of filial piety. The price for the taste of their food — my independence — was too high.

To my son, I offer what my parents couldn’t provide during decades in survival mode as immigrants trying to make a living: time and patience.

Though I pride myself on being a pretty good home cook now, most of my skills are self-taught, the result of hours spent poring over internet recipes and cookbooks. Through trial and error, I discovered ramen tastes better when cooked in a wider pot, fried rice tastes more like Mom’s with white pepper, and kimbap needs less rice for the right flavor balance.

What I inherited from my parents is a discerning palate, a natural instinct in the kitchen, and a childhood full of food memories for my culinary inspiration. These are no small gifts and I never take them for granted.

I am now the mother of a 9-year-old. My child is the same age I was when my whole world changed, when I was forced to grow up in an instant. My current way of life is a privilege built upon my parents’ labor as well as my own, and the sacrifice of my childhood. To my son, I offer what my parents couldn’t provide during decades in survival mode as immigrants trying to make a living: time and patience. I show him love with food, yes, but I also show him how much I care by teaching him how to make the dishes from which he takes comfort and joy. I allow him to make messes and mistakes. We take a breath and we start over.

For years, he has been proud to make his own ramen. He beams as he dices Spam to toss in the fried rice that he cooks all by himself and delights in swirling the egg for egg flower soup. My husband and I often joke that our kiddo already knows how to cook more dishes than either of us did when we were in college. We celebrate his dented kimbap rolls and imperfect dumplings with absolute pride.

A few weeks ago, inspired by a family friend who is a renowned chef, our son donned a tiny chef’s hat and apron to prepare and serve (with me as his sous chef) a five-course tasting menu for our family, the chef, and his wife. Our child grinned through the entire meal, excited to nourish the grown-ups and show off each course he’d carefully chosen.

Though the teenage years are still ahead of us and there is a possibility that I may have to eat my words, I hope that my son’s independence is not something he has to ever fight me to gain. Independence and a strong sense of self are things I not only want to give freely, but to help him nurture.

And one day, when he’s all grown up, I hope that he will want to spend time with me even when he doesn’t need me.

In the meantime, I don’t believe in holding my cooking secrets hostage for his affections, least of all because it doesn’t work. I don’t believe in secret family recipes — I will teach my child to cook whatever he wants to learn. And one day, when he’s all grown up, I hope that he will want to spend time with me even when he doesn’t need me.

There’s a Korean saying about how the deliciousness of food comes from the flavors lent by a mother’s fingertips. And yes, Korean food, from bubbling stews to colorful banchans, requires much labor — hand mixing, marinating, and pickling to build the complex flavors — but this idea that the secret comes from the chef applies to all cuisines. In time, I hope I can show my parents, who are now doting grandparents, that I could never replicate the exact flavors of their cooking, even if they had taught me. I will always crave the warmth from a simple dish of Chinese tomato and egg scramble plated by my mother with her dimpled smile, no matter how well I can make it myself.