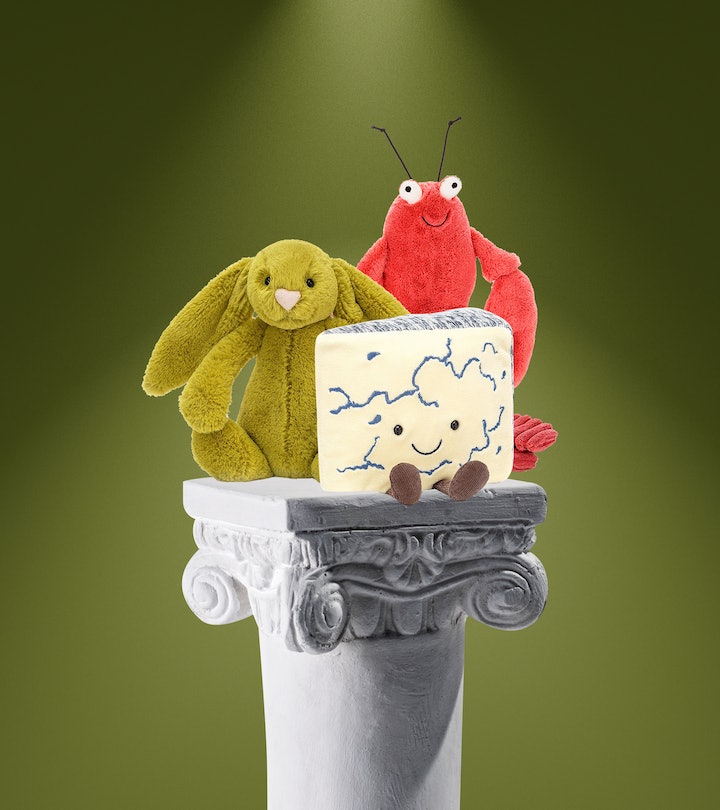 Who Is Jellycat Really For?

The first night I spent with medium Bashful duck, I slept more soundly than I had in months.

The first time we spent the night together, bodies intertwined, I slept more soundly than I had in months. I awoke refreshed, relaxed, and guilty. I never cuddle my usual sleeping partner in bed because I overheat. But this was different. Comfortable. I rushed to hide the evidence when my 2-year-old daughter bopped into the room. She found it, of course. She finds everything. “My duckie,” she said, fishing out a plush orange foot from under the duvet. “Quack, quack.” She laughed and threw the stuffed fowl on the ground, grabbed my hand, and instructed me to get up. I looked back at her duck, who in my heart had become mine, lying face-down on the hardwood floor. Wings splayed, beak twisted — the softest motherfucker I’d ever hugged. “I’ll be back,” I whispered aloud — really — before disappearing through the door. I did come back. I slept with that duckie for a solid, blissful month before my daughter, who was indifferent about it in the beginning, reclaimed the bird and named it Pato.

Out in the world, Pato is better known as a Jellycat medium Bashful Duck and retailed for around $25 before it was retired in 2020. Jellycat, if you’re unfamiliar, is a jaunty British soft toy company that’s been around since 1999, and they make some of the coziest and cutest stuffies in the game. Like many parents before me, I was introduced to them as a new mom, when my then-newborn was given not one but two Jellycat bunnies, or Bashful Bunnies, one of the brand’s hallmark items.

What makes these bunnies so perfect for newborns is their texture — they're luxuriously soft. But more than plushness, Bernardo, my daughter’s medium-sized gray bunny, had a poised and unbothered essence that I immediately respected. His floppy ears and small arms hung down casually beside a little round belly, and he sat upright while his feet drooped to either side nonchalantly. A velvety, heart-shaped pale pink nose sealed the deal.

Turns out, Bashful Bunnies are often the gateway drug that precedes a parent’s Jellycat habit.

Before I knew it, I’d found my way to Jellycat’s online store, where I squealed over whimsical British-sounding names like Fuddlewuddle Fox and Curvie Hippo, “a roly-poly poppet.” By the time I discovered the line of food-inspired Jellycats, including grinning croissants and cheeky boiled eggs, my cart total had surpassed my monthly rent, and I had to step away.

Turns out, Bashful Bunnies are often the gateway drug that precedes a parent’s Jellycat habit. An amiable Chicago-area father who wishes to remain anonymous told me that the Bashful Bunny was “the only cuddly toy my son ever latched onto,” but that it was so good it led to experimentation: a dragon and a chicken for his daughter, but also plant stuffies for his foliage-loving partner. The bunnies got to Andrea, a non-binary parent of a preschooler, as well. Their daughter has three in total, one white and two identical brown ones (the second brown bunny was purchased in case one of them got left behind somewhere). “We generally kept the other bun kicking around in our room somewhere.”

One thing led to another, and soon Andrea was cuddling that bunny all night long. “I was like, you know, this is underrated.” This admission made Andrea feel like “a giant child,” but it made me grateful that I’m not the only grownup soothed to a stirless sleep by a child’s toy.

To find more of my kind, I asked my Instagram followers if any of them had a Jellycat problem. Soon, a childhood friend, now in her late 30s, admitted to me that she sleeps with a Jellycat named Spencer the Pig every night. She also said that if I really wanted to speak with a Jellycat fan, I needed to get in touch with her aunt Rita. Apparently, Rita’s 11-year-old daughter used to try to take her mom’s stuffies and “they have separate Jellycats now.”

I’ve known Rita since I was a kid. She was my friend’s aunt but only a decade older than us, an effortlessly cool Gen Xer, always chill and stylish. Over the phone from her home in Vancouver, Rita confirmed that yes, she and her daughter have separate stuffies, but she only has two to her daughter’s 18. Which means Rita has purchased her child 18 Jellycats. “I just love stuffies, and Jellycats are so cute,” she says, admitting casually, “I sleep with mine every night.” She’s come to rely on her stuffed elephant, whom she’s named Peanut. When she recently went on a trip and left Peanut at home, she lived to regret it. “I didn’t have room in my suitcase, and I really missed him,” she said. “Adults need comfort too.”

I think I agree with Cool Rita. I might be staring down the last years of my 30s, yards down the thread of life from my stuffed-animal-obsessed childhood, but it is an objective fact that stuffed animals offer a sort of steady ease that is as portable as it is constant. They want nothing from you, and they are better than pillows to cry into when the larger world is… not going very well, and you’re just trying to keep your shit together. Why should adults be deprived of that sweet solace?

When I think about it too hard, I’m not sure if these amusing offerings are adorable little art pieces or the soft underbelly of late-stage capitalism.

Part of Jellycat’s multigenerational appeal is the sense that they are slyly catering to the over-18 set. While this isn’t explicitly stated anywhere, it’s hard to imagine my 2-year-old gravitating toward a pair of olives on a wee branch, each with its own pair of tiny legs and satisfied grin, an espresso cup full of a bold brew, sitting on sturdy little corduroy legs, or a smiling piece of sushi. A block of blue cheese with similar anthropomorphic traits is described as “a strong little scamp, with vintage vibes and dairy daring,” a line no millennial could possibly resist.

When I think about it too hard, I’m not sure if these amusing offerings are adorable little art pieces or the soft underbelly of late-stage capitalism. What I do know is that I want to give Jellycat my money and fill my home with quirky, squeezable objects.

To grasp exactly how much company I have in this obsession, take a bracing look at the reviews on the Jellycat website. They do include the usual buyer-beware warnings that tend to appear among product reviews — according to one, Cicero Sloth is “not a super softie," and another states that Rumpletum Bear “was under-stuffed, emaciated, and could not sit up on its own." But even the negative reviews tend to give the stuffy the benefit of the doubt: Munchkin Cat is “very different from the pictures unfortunately but he is still cute. his face is misshapen and he doesn't sit up quite right. poor lads got scoliosis i'm afraid."

The vast majority of reviewers come to gush. Someone gives Bashful Black & Cream Puppy the highest praise a dog can earn, calling it, “the best boy,” and Smudge Elephant’s biggest fan declares, “i would die for this elephant.” A personal favorite casts snuggling Gus Gryphon as a form of self-care: “He is cheaper than therapy. I mean look at him he's only a little guyyy.”

Jellycat’s on-site reviews are so passionate that a fan created @ReviewsJellycat, a Twitter account dedicated to screen-grabbing and sharing the reviewers’ most effusive feedback. (I reached out to this dedicated Jellyfan for the account’s origin story but never heard back).

Emily, a Toronto-area mom to a 4-year-old, told me that a post by the @ReviewsJellyCat Twitter account inspired her to purchase a tiny lamb Jellycat as a joke for her husband. The tweet, which has been retweeted over 9,100 times, reads, “i am hormonal and i am crying my eyes out at this little lamb i don’t know what to do its so little.”

If there is a Jellycat marketing strategy, it is, much like Rihanna’s, to let the fans speak for it.

I asked Emily’s husband Elamin about his tiny stuffed gift, and he replied, “my lamb son!” The two (Elamin and his lamb son, who he has named “Lambert”) don’t share a bed — Elamin’s daughter maintains physical custody. But distance makes the heart grow fonder. “I make this ‘awwwwww’ face every time I see him,” Elamin said. “I regard it as a baby that is a toy, aka it’s a toy but it is also a baby, and it’s no less deserving of our li’l baby voices.” For Emily, Jellycats’ particular appeal is about the proportions. “There is something about how soft they are and also the weight distribution,” she notes. “Their heavier middles combined with their flailing, tiny limbs make them very sweet.”

If there is a Jellycat marketing strategy, it is, much like Rihanna’s, to let the fans speak for it. The company, which is still privately owned by its London-based founders, brothers Thomas and William Gatacre, issues no press releases. It has no social media accounts. When I get in touch with Danell Gibbons, the affable and beautifully media-trained president of Jellycat Inc., to discuss why a line of stuffed animals has become popular among adults, she stays on message. Jellycat is “a brand for all ages,” Gibbons tells me, and the company “work[s] hard … to design items that appeal to both the young and the young at heart.”

I ask her if she knows about the Twitter account, and she admits that she does. “We don’t lose sight of what delights,” she says. Could she provide any clues about upcoming releases? “I could, but I never would,” she says. “The world needs more sweet surprises.”

She could be right, but the extremely active and community-minded subreddit Jellycatplush is filled with queries about upcoming products, which other members of the fandom answer thoughtfully and with many suggestions. When someone wrote that a certain Tumblr is a source of future release clues, another fan replied that there was no need to bother with that. “When there are new jellycats available people on here will post a link to the main website so that you don’t have to keep checking."

For me, a bittersweet surprise is that, even though I purchased him, Pato the duck was only ever on loan to me. He now serves as my daughter’s emotional support duck at nursery school every day, and at night he sleeps on the living room floor. He's been sullied by his day care duties. He's seen too much, smells a bit weird, and I know it just wouldn't be the same.

I thought about buying another one, just for me, but as luck would have it, they’ve discontinued the damn duck. I might be a Jellycat devotee, but I draw the line at spending $150 on a rare stuffed bird on eBay. I’m currently debating between Amore, a rotund, sleepy-eyed black cat, and Francesca, a glitter eyeshadow-wearing red fox. Whichever I choose, I know I’ll sleep soundly and without shame, at least until my toddler steals my toy.