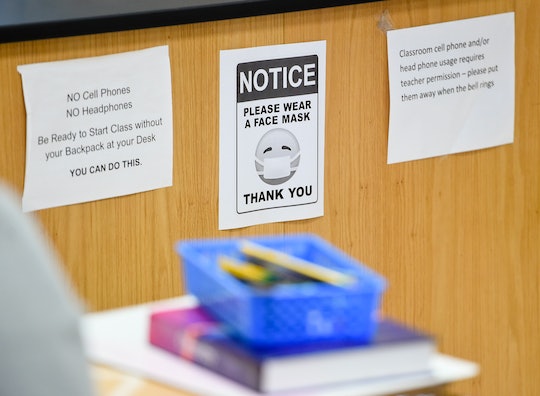 The lawsuit alleges it’s “unconstitutional” for the school to require children to wear masks eight hours a day.

When Texas Gov. Greg Abbott rescinded a statewide mask mandate in March, the Katy Independent School District told students they’d need to keep wearing face masks if they wanted to continue participating in in-person learning. Outraged over the policy, a handful of parents sued the Texas school district for requiring masks, claiming it was not only “unconstitutional” but an example of “separate but equal” education policies banned by the Supreme Court in 1954.

Although Abbot lifted Texas’ mask mandate effective March 10, he directed the Texas Education Agency to leave decisions about if, when, and where students and teachers continued to wear masks up to local school boards. In fact, the Texas Education Agency noted on its website that “local school boards have full authority to determine their local mask policy.”

According to policies outlined in its COVID Mitigation Plan, Katy Independent School District in Katy, Texas, continued to require teachers, staff, and PK-12 grade students to wear face coverings when arriving or leaving school, when riding buses, when in hallways or common areas, or when social distancing is not feasible such as in classrooms. “Students who refuse to wear a face covering will be moved to Katy Virtual Academy for the duration of the grading period,” the school district has noted. (Students who provide documentation of a medical condition that precludes them from wearing a face mask are exempt from the policy.)

A group of five parents have since sued the school district, arguing the policy is unconstitutional and a violation of rulings regarding “separate but equal” education. "It's my clients' position, one, that it's illegal and unconstitutional to force their children to wear a mask eight hours a day at Katy ISD, and secondly, our position is it's inherently unequal to say that online learning is the exact same thing as in-person learning," Jared Woodfill, a lawyer representing the parents told Houston Public Media.

In court documents obtained by Fox26 Houston, parents argued the district’s policy of placing students who refused to wear face masks in a remote learning model represented a form of “separate but equal” discrimination deemed unconstitutional in the 1954 Supreme Court ruling Brown v. Board of Education. That ruling pertained specifically to state laws enabling racial segregation in public schools.

“You don’t create a policy that is geared around a minority,” Woodfill told The Texas Tribune, noting only a fraction of students and teachers were at risk of experiencing serious illness from COVID-19. “You don’t shut down and force 99.9% of the people to wear a mask all day long.”

The lawsuit argued masks have “no significant impact in stopping the spread of COVID-19” and that the virus’ risk to children is “minimal.” It claimed, “KISD’s decision to force Plaintiffs and students to wear masks and/or face coverings has severe ramifications for students and parents... including breathing issues, headaches, depression, dermatitis, dizziness, bacterial infections, and concentration issues.”

While data from the CDC has shown that in-person learning and schools are not behind substantial community transmission of COVID-19, the agency has also encouraged the use of facial coverings in children 2 years of age and older to help stop the virus’ spread.

In a statement to Fox26, Katy Independent School District said it “continues to follow the Governor’s Executive Order GA-34 and comply with the Texas Education Agency’s Public Health Planning Guidance." The parents behind the lawsuit have asked the court to issue an injunction against the school district’s face mask policy, effectively enabling students to attend the in-person classes sans mask.