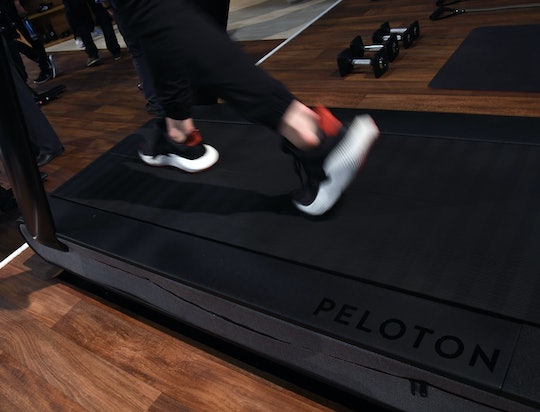 Here’s what parents need to know.

The U.S. Consumer Product Safety Commission (CPSC) warned parents back in April against using the Peloton Tread+ after an accident with the workout machine resulted in one child’s death. Now, Peloton has announced a recall on all treadmills. If you have a Peloton treadmill at home, here’s everything you need to know.

On April 17, CPSC warned anyone with pets or small children at home to “immediately” stop using the Peloton Tread+, claiming the treadmill posed serious risks of abrasions, fractures, and death. The warning comes roughly a month after Peloton CEO John Foley publicly acknowledged a child had died in an accident involving the Tread+.

Neither Peloton nor CPSC have gone into detail about the Tread+ accident that resulted in a child’s death. Foley initially alerted Peloton customers to the death in a March statement urging Tread+ users to follow all safety warnings and instructions each and every time they use the machine. “I recently learned about a tragic accident involving a child and the Tread+, resulting in, unthinkably, a death,” Foley wrote in March. “While we are aware of only a small handful of incidents involving the Tread+ where children have been hurt, each one is devastating to all of us at Peloton, and our hearts go out to the families involved.”

Over the weekend, Peloton expanded on its original alert to say, “a child died while using the Tread+.” It remains unknown, however, how old the child was or what injuries they sustained that ultimately resulted in their death.

The CPSC has warned anyone with small children or pets at home to stop using the Peloton Tread+, noting there have been multiple reports of children becoming “entrapped, pinned, and pulled under the rear roller” of the machine. At least one incident occurred while a parent was running on the treadmill, CPSC said. Pets and other objects have also been reported to have been “sucked” under the Tread+, according to the federal agency.

“CPSC is aware of 39 incidents including one death,” the warning noted. “CPSC staff believes the Peloton Tread+ poses serious risks to children for abrasions, fractures, and death.”

Along with the warning, the consumer safety agency also released a video showing how children can get pulled under the Tread+. In the video, two children can be seen playing on and around a Tread+. As one child walks on the moving belt of the Tread+, another child touches a large plastic ball to the rear of the belt resulting in the ball and the child’s hands being pulled down under the belt. Although the child is initially able to free their hands they are quickly pulled back farther under the belt of the still-running treadmill after touching the ball again. After being pinned under the machine for a few seconds, the child frees themselves and walks away.

While the video depicted children’s unsupervised use of the Tread+, CPSC has warned that incident reports suggest children may also be seriously injured while an adult in using the machine. “It is believed that at least one incident occurred while a parent was running on the treadmill, suggesting that the hazard cannot be avoided simply by locking the device when not in use,” the agency said in its warning.

How Peloton Has Responded

Peloton initially pushed back on CPSC’s warning in April, issuing a statement in which the company claimed the federal agency’s message was “inaccurate and misleading.” The exercise company said it had reached out to CPSC but that the agency “was unwilling to engage in any meaningful discussions” and later publicly characterized Peloton’s outreach as a delay tactic.

“This could not be farther from the truth,” Peloton said. “The company already urged Members to follow all warnings and safety instructions.”

In April, Peloton was adamant that its Tread+ complied with all applicable safety standards and could still be used with proper precautions. “There is no reason to stop using the Tread+, as long as all warnings and safety instructions are followed,” Peloton said in a statement.

Both Peloton and CPSC urged parents to always disconnect the safety key, which must be connected to the Tread+ in order for the treadmill to operate, after use to prevent children or pets from being able to purposefully or accidentally turn the Tread+ on. Additionally, they recommended storing the safety key separate from the machine and well out of children’s reach. Peloton has also said that children under the age of 16 should never use the Tread+ and that children, pets, and other small objects should be kept away from the Tread+ at all times. They urged parents to use and store the Tread+ in a locked room and unplug the machine when it is not in use.

By May 5, however, Peloton had agreed to recall the machine.

Peloton’s Recall Of The Tread+

On May 5, CPSC announced Peloton had agreed to recall its Tread+ treadmill with a model number of TR01 following one child’s death and 29 reports of the machine causing injuries to children, including lacerations, broken bones, and second-and third-degree abrasions. About 125,000 Tread+ treadmills are expected to be recalled.

Peloton is also recalling its Tread treadmill (model number TR02) due to the risk of the machine’s touchscreen detaching and falling following six reports of the touchscreens detaching. While no injuries have been reported in the United States, an unspecified number of minor abrasions, cuts, and bruises have been reported in Canada and the United Kingdom, according to CPSC.

“I want to be clear, Peloton made a mistake in our initial response to the Consumer Product Safety Commission’s request that we recall the Tread+,” CEO John Foley said in a statement on Wednesday. “We should have engaged more productively with them from the outset.”

What Should Parents Do?

All consumers in possession of a Tread+ are urged to immediately stop using the exercise machine and contact Peloton for a refund. Consumers who contact Peloton by Nov. 6, 2022, to return their Tread+ will be issued a full refund. All recalled returns done after that date will result in a partial refund.

Runners who aren’t keen on returning their Tread+ are being offered free help from Peloton to move the machine to a room or area where it cannot be accessed by children or pets. Peloton is also reportedly working on software that will automatically lock the Tread+ after each use and use a 4-digit passcode to unlock the machine in an effort to prevent accidental or unauthorized access.

Those in possession of a Peloton Tread can also contact the company for a return with full refund or for a free inspection and repair of their machine to ensure the touchscreen is secure. Neither Peloton nor CPSC have announced a deadline for full refunds of the Peloton Tread.

This article was originally published on April 20, 2021