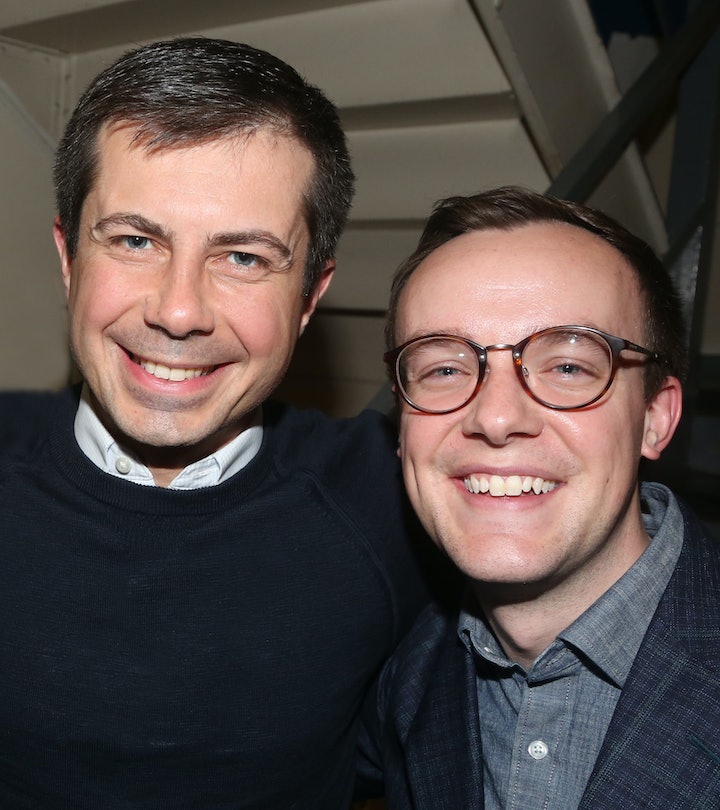 Why Do Conservatives Outraged By Paternity Leave Think Fathers Are So Useless?

Pete Buttigieg is back at the Department of Transportation after a two-month paternity leave to care for his newborn twins. His return, which is the first official acknowledgement that he’d been on leave, has prompted criticism from Conservative pundits. Frankly, the irony of Conservatives who have espoused “family values” as a guiding political principle getting salty about a man caring for his children is laughable... at least it would be if not for the fact that their regressive attitudes and sphere of influence are actively harming families.

“Paternity leave, they call it!” scoffed Tucker Carlson on Fox News, as though the idea of paternity leave were some newfangled TikTok trend and not a policy issue currently being debated in Congress (or available in other countries around the world). “Trying to figure out how to breastfeed,” he continued. “No word on how that went.” (We’ll circle back to that, don’t worry.)

“The thing about paternity leave is there isn’t much for dad to do when the baby is a newborn, especially if mom is breastfeeding,” opined blogger and podcaster Matt Walsh in a tweet. “His main role is to take care of mom as she recovers, but of course that doesn’t apply to Buttigieg so I’m not sure why he needs paternity leave at all.” (We’ll definitely get back to that in a minute.)

Senator Marsha Blackburn was more succinct: “Pete Buttigieg should do his job,” she tweeted on Friday.

And yet the idea of supporting children and families is central to the political philosophy of all three figures. Walsh frequently writes about family values, extolling the family as “the foundation of civilization.” Blackburn cites her experience as a mother and grandmother as being foundational in her work as a United States Senator, ran on a platform of family values in her 2018 senate bid, and even titled her latest book The Mind of a Conservative Woman: Seeking the Best for Family and Country. Carlson has similarly bemoaned the decline of family values and the importance of politicians serving the needs of families throughout his career in broadcasting. In a 2018 segment for his show on Fox, he put it this way.

“The Republican Party is a Conservative party – Republicans are supposed to care about families, not just a little bit but above all. A country without strong families is a weak country. It is a volatile place, a chaotic place, it's a place that is susceptible to political demagoguery. It is a place America is becoming. If you want to stop that slide, support families, it's that simple.”

Of course, we all know that Conservative firebrands and politicians don’t mean all families. Next to that word, every time they say it, there’s an invisible asterisk beside it. They say “families” but they mean “families of cis-hetero married couples with middle class, white Evangelical-Christian values.” It would be irresponsible not to point out, at the heart of their ire, not explicitly mentioned but barely disguised, is the fact that the Buttigiegs are a gay couple. Walsh has referred to marriage equality as a “nonsensical concept,” and that “all children deserve a mother and a father.” Same-sex or single-parent adoptions, he has said, should be illegal. Blackburn, who has held office in Congress as either a Representative or Senator since 2003 has routinely opposed to LGBT rights, going as far as to file an amicus before the Unites States Supreme Court defending a taxpayer-funded agency’s right to discriminate against same-sex couples seeking to foster a child. The Buttigiegs’ being gay is, of course, a huge component to the backlash they’re facing.

But, OK, let’s say I’m completely imagining that last bit in a fit of queer-leftist-antifa-feminst-snowflake hysteria because i wAnT tO bE tRiGgEreD. Let’s say the arguments of these three, and others like them, are made in good faith based simply on the idea that paternity leave is unnecessary.

Why does their brand of family values think so little of fathers? Walsh says there isn’t much for a dad to do when the baby is a newborn. But, as a father of four himself, he should know how. much. work. goes into the care of a newborn. And what, exactly, is gender specific about feeding a baby, changing diapers, rocking a baby to sleep, soothing a baby, giving a baby a bottle, swaddling the baby, taking the baby to the 24,000 routine doctors appointments that happen in the first few weeks, doing the baby’s laundry, bathing the baby, etc. etc. As though bonding with a child isn’t something a father can do right away. As though learning how to co-parent with your partner right out of the gate isn’t important. As though the only valid parent for the first however many weeks of a child’s life, in all matters, is the woman who gave birth to them.

The benefits of paternity leave, for moms, babies, and the fathers themselves have been recorded again and again. Paternity leave makes families stronger... but not in a way, it seems, that serves the interests of “family values” Conservatives.

But, honestly, Buttigieg doesn’t need me to defend him or his choices. Speaking with CNN’s Jake Tapper, he responded to Carlson’s derisive remarks and defended his decision to take the paternity leave guaranteed to him by law.

“As you might imagine we're bottle-feeding,” he began wryly, “and doing it at all hours of the day and night. I'm not going to apologize to Tucker Carlson or anyone else for taking care of my premature, newborn, infant twins. The work that we are doing is joyful, fulfilling, wonderful work. It's important work, and it's worth it. Every American should to be able to do it when they welcome a new child into their family.”

Between the two, I know which argument looks more like family values.

More Like This
Dads Share What Paid Family Leave Would Mean To Them In Heartwarming Video
Ketanji Brown Jackson Spoke Directly To Her Daughters In Her Powerful Opening Statement
AAP Says Kids Will Face "Grave Consequences" Now That Roe V. Wade Is Overturned
Robb Elementary School Is Set To Be Demolished After Deadly Shooting