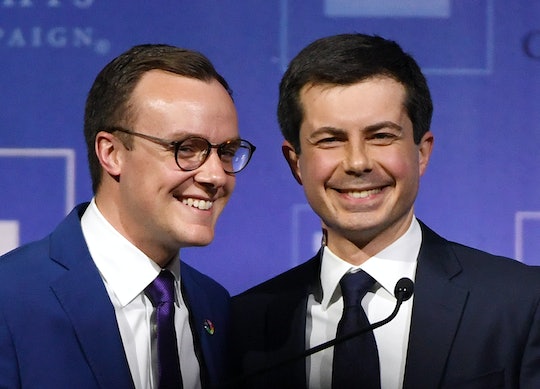 After announcing that they’d become parents in August, the couple recently shared their first family photo and their children’s names.

Secretary of Transportation and former presidential candidate Pete Buttigieg announced on Saturday via Twitter that he and his husband Chasten have welcomed a son and a daughter into their family.

“Chasten and I are beyond thankful for all the kind wishes since first sharing the news that we’re becoming parents. We are delighted to welcome Penelope Rose and Joseph August Buttigieg to our family,” he tweeted, sharing a black and white photo of himself and Chasten each holding a newborn.

News first broke of the Buttigiegs’ family in August, when Pete made the initial announcement, also via Twitter. “For some time, Chasten and I have wanted to grow our family. We’re overjoyed to share that we’ve become parents!” he tweeted. “The process isn’t done yet, and we’re thankful for the love, support, and respect for our privacy that has been offered to us. We can’t wait to share more soon.”

Details remain scant regarding the couple’s specific road to parenthood. In a Washington Post profile earlier this summer, Chasten shared that he and the former Democratic presidential candidate had been trying to expand their family by adoption. They’d even been contacted by a potential birth mother in labor, but the unnamed woman changed her mind just a few hours later. “It’s a really weird cycle of anger and frustration and hope,” he said of the disappointment. “You think it’s finally happening and you get so excited, and then it’s gone.”

Clearly, the pair – who have been together since 2015 and married since 2018 – kept hope hope alive, and their dream of parenthood has become a reality. In WaPo, Chasten mused about what life with a little one would be like: vacations to Michigan, fishing, visiting grandparents. He imagined telling his child, according to the paper, “We tried so hard for you. We waited so long for you.”

Parenthood among LGBTQ+ couples has become increasingly commonplace, and yet the Buttigieg family will be a first in its own right: Pete is the first openly gay cabinet member in the history of the United States, making his new family similarly historic. But with LGBTQ+ elected officials becoming more common as well, it is likely we will see more same-sex “political families” moving forward as well.

This article was originally published on Aug. 17, 2021